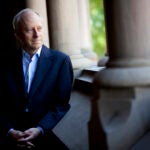 There are few more vivid examples that show how falling carbon emissions can drastically reduce the air pollution fueling global warming than the clearer skies above scaled-back cities around the world during the coronavirus pandemic.

In an announcement Tuesday, Harvard signaled its expanding commitment to cleaner skies, targeting climate change through a new pledge to reduce emissions by monitoring its investment portfolio. Describing climate change as “a defining issue of our time,” Harvard President Larry Bacow said the University is setting a goal to have the endowment reflect “net-zero” greenhouse gas emissions by 2050. That would match the timeline set by the Paris Agreement, an international compact designed to stem the continuing rise in global temperature. The net-zero pledge is a first among U.S. endowments.

The net-zero goal involves man-made greenhouse-gas emissions being canceled out by efforts to remove them from the atmosphere. Harvard Management Company (HMC), which administers the endowment, plans to reach that goal through a process involving collaboration with faculty and other experts to calculate emissions, and careful work with asset managers to examine their portfolio’s transparency and emission levels. The Harvard Corporation — the University’s highest governing body, which approved the new standard — asked HMC for an update by year’s end to outline how it plans to achieve net-zero emissions.

The announcement was welcomed by environmental experts across the University, who praised the plan.

Harvard government Professor Dustin Tingley called the move a “proactive decision” that “lays a clear path toward an ambitious goal, and does so in a way that recognizes the many partners that we will need in order to make a transition.”

“It also, appropriately, puts a focus on reducing fossil-fuel demand rather than narrowly focusing on companies and communities that have powered our country for many years,” added Tingley, who has researched global climate technologies and policies. “This will set up many opportunities for research, not just in the sciences but also in fields like economics and political science.”

“In my judgment, this is an important step by Harvard,” said Robert Stavins, A. J. Meyer Professor of Energy and Economic Development at Harvard Kennedy School and director of the Harvard Environmental Economics Program, “because President Bacow has offered what can be a very sensible and truly effective way forward for the University to play a leadership role in addressing the threat of global climate change through its core functions of research and education, as well as through initiatives to reduce Harvard’s own use of fossil fuels. The strategy described by President Bacow will cover Harvard’s entire investment portfolio, and in so doing will focus both on the demand for fossil fuels as well as the supply. That is exceptionally important.”

The announcement followed this week’s creation of a Presidential Committee on Sustainability, which will advise Bacow and other University leaders by creating a comprehensive sustainability vision. The committee, co-chaired by Rebecca Henderson, the John and Natty McArthur University Professor; John Holdren, the Teresa and John Heinz Professor of Environmental Policy at Harvard Kennedy School; and Executive Vice President Katie Lapp, will draw on Harvard’s vast knowledge and expertise to develop solutions for energy and emissions reduction, around both the University and the world.

“We encourage our students, researchers, faculty, as well as staff, to use the campus and surrounding community as a living lab to test exciting ideas and pilot promising new solutions to real-world challenges threatening the global health of people and the planet,” Lapp said.

The University’s new pledge aligns with HMC’s sustainable-investing framework, which was adopted in 2014 when Harvard signed on to the U.N.-sponsored Principles for Responsible Investment, a six-point outline for a global standard. Harvard’s framework factors a range of environmental, social, and governance factors into its investment decisions.

During his presidency, Bacow has engaged with Harvard faculty and students interested in combating climate change, including through having the endowment divest from any holdings in the fossil-fuel industry. In February, professors in the University’s largest School passed a resolution calling for divestment.

In a new letter to Dean Claudine Gay of the Faculty of Arts and Sciences, Bacow said the Harvard Corporation’s decision was a more effective approach to ensuring climate health than divestment would be, enabling the University to continue working with partners committed to “transitioning to carbon neutrality and to funding research on alternative fuels and on strategies to decarbonize the economy.”

“If we are to develop a productive path forward, we and others will need to work with these companies, recognizing our dependence on their products for the foreseeable future, the nature of the assets under their control, and the special knowledge and expertise they possess,” he wrote. “Any effort to put a price on carbon — to offer just one example — will require an inclusive coalition of shareholders, governments, and other stakeholders. Meaningful change cannot begin with a symbolic act that disregards these realities.”

The new recommendations build on years of efforts to address climate change and sustainability at the University and beyond. “Harvard’s pledge today supplements our many ongoing efforts to prepare for and accelerate the necessary transition to a fossil-fuel-free economy,” Bacow said in Tuesday’s announcement.

The University has made a number of moves toward environmental protection in the past. During the administration of Bacow’s predecessor, Drew Faust, the University formalized the Office for Sustainability and created its first sweeping goal to reduce on-campus greenhouse-gas emissions by 30 percent, which was achieved in 2016. In 2018, Faust announced a new climate action plan calling for campus operations to be fossil fuel-neutral by 2026, and fossil-fuel-free by 2050.

In 2004, then-President Larry Summers established a University committee to recommend a policy on sustainability, which led to adoption of campus-wide sustainability principles. His predecessor, Neil Rudenstine, backed the Green Campus Initiative, which became the expanded Office of Sustainability. Ten years earlier, Derek Bok fostered the environment that led to creation of the Center for the Environment, a faculty collaboration across Harvard Schools on research and education.