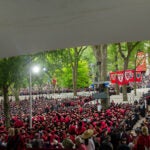 Suzannah “Suzie” Clark, the Morton B. Knafel Professor of Music and Harvard College professor in the Faculty of Arts and Sciences, has been named the next director of the Mahindra Humanities Center, effective July 1. Clark succeeds Sunil Amrith, who served as interim director over the past academic year.

Clark is an accomplished musicologist and music theorist who specializes in the works of Franz Schubert, the history of tonal music theory, and medieval vernacular music of the 12th and 13th centuries. During her time as chair of the Harvard Music Department from 2016‒2019, she expanded its course offerings, recruited professors of the practice Claire Chase and Esperanza Spalding, and supported the founding of the Creative Practice and Critical Inquiry Program in collaboration with composer, musical improviser, and Franklin D. and Florence Rosenblatt Professor of the Arts Vijay Iyer.

“Professor Clark brings to the Mahindra Center her belief in the power of the humanities to teach people how to ask questions and to think from different points of view,” wrote Provost Alan Garber and Claudine Gay, Edgerley Family Dean of the Faculty of Arts and Sciences, in a message to the Harvard faculty announcing her appointment. “She is also a fierce supporter of the liberal arts, encouraging students to bring their different passions, interests, and strengths together.”

Clark currently teaches a cross-disciplinary course on how mathematical transformations and group theory can inform music, bringing together students with backgrounds in the humanities and natural sciences. Her cross-disciplinary approach has also informed her time as a member of the executive committee for the new ArtLab in Allston, which brings faculty and students from across the University to cross boundaries of media and discipline in pursuit of aesthetic innovation. This cross-disciplinary perspective provides a natural fit for the mission of the Mahindra Center, which is the exchange of ideas and sharing of scholarly and artistic work.

“I am deeply honored to have this wonderful opportunity to be the next director of the Mahindra Humanities Center,” said Clark. “I look forward to building on the strengths of this dynamic and vibrant center and its legacy of cross-disciplinary intellectual exchange at the forefront of humanistic endeavor. At this historic time, as we all face the unsettling prospect of prolonged social isolation and as the headlines of each day bring greater uncertainty, the humanities and creative arts bring strength to the human spirit and new understandings of human resilience in the darkest moments. During my time as director, I look forward to working with the center’s executive committee and staff to amplify the interests of faculty, postdocs, graduate and undergraduate students, and to engage the wider public.”

Clark was the William J. Bouwsma Fellow at the National Humanities Center in North Carolina, the Edward T. Cone Member at the Institute for Advanced Study in Princeton, and a fellow of the American Council of Learned Societies. She previously served as the president of the New England Conference of Music Theorists, on the executive board of the Society for Music Theory, and on the council of the American Musicological Society. She holds undergraduate and master’s degrees from King’s College in London as well as an M.F.A. and Ph.D. from Princeton University. Before moving to Harvard in 2008, Clark taught at Oxford University and was a tutorial fellow of Merton College for eight years. She is currently a member of the Mahindra Center’s executive committee.

Since its inception in 2011, the Mahindra Humanities Center, endowed by Anand Mahindra ’77, M.B.A. ’81 in honor of his mother, Indira Mahindra, has sponsored lectures, panels, readings, conferences, workshops, and seminars on a wide range of topics. It seeks to foster collaborations between the humanities, social sciences, and sciences in the belief that the humanities make a unique contribution to establishing — through interpretation and conversation — communities of interest and climates of opinion.

“As we have said before, when it comes to the humanities in their broadest sense — to ask questions about what it means to be human — the Mahindra Humanities Center is a crossroads for the entire University,” wrote Garber and Gay. “We are confident that Professor Clark will build upon existing connections and develop new ones with other disciplines around the University and beyond Harvard as she works with the center’s executive committee to shape the intellectual vision for the Mahindra Center’s next chapter.”