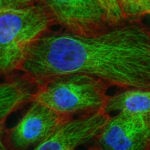 Animals rely on group behavior to survive, whether it’s fish swimming together to avoid predators or humans sharing knowledge with each other. But despite the importance of such social interactions, scientists do not have a good understanding of the biological processes that guide collective behavior.

In a new study published in iScience, researchers at Harvard University and the Max Planck Institute of Animal Behavior developed a new way to study how genes influence collective behavior. Using zebrafish as a model, they set out to establish the connection between genetic mutations and behavior.

“We are interested in answering a fundamental biological question: why do animals live in groups?” said Mark Fishman, Harvard professor of stem cell and regenerative biology. “To search for genes that affect collective behavior, we focused on genetic mutations that are associated with psychiatric diseases that have a social behavior component, including autism and schizophrenia.”

The team observed that in fish with specific genetic mutations associated with human psychiatric disease, group behavior was altered. The findings pave the way for a new generation of research into neuropsychiatric conditions such as bipolar disorder, autism, and depression.

The researchers tested 90 different genes to see if they affect zebrafish social behavior, using gene editing to mutate one gene at a time. For each genetic mutation, the researchers put the edited fish together in a large tank to see how they interacted with each other.

“We used computer vision to track individual fish and analyze their interactions,” said Fishman. “By documenting how interactions change among the fish — whether they get out of each other’s way, or whether they align with each other — we could see how the overall pattern of group behavior changes.”

The researchers found several genetic mutations that had a distinctive effect on fish group behavior. Normally, zebrafish spend much of their time in dynamically moving groups, called “schools” when all moving together in a coordinated fashion, and “shoals” when in less directed groups. Some mutations affected these groups, for example causing the fish to be scattered throughout the tank, or huddling together in one location.

“We developed new computational tools for tracking and analyzing behavior among animals, which provide a powerful means to investigate how genetic factors influence collective behaviors,” said Iain Couzin, Director of the Max Planck Institute of Animal Behavior and Chair of Biodiversity and Collective Behaviour at the University of Konstanz. “This is a first step toward developing a mechanistic understanding of the genetic basis of social behavior, and to understand more clearly how specific neural defects impact behavior in the way they do.”

“Many questions about group behavior have eluded biologists at a fundamental level: What is the nature of leadership and followership? How do individual personality traits — such as boldness, shyness, and sociability — contribute to overall group behavior? What drives conformity and individuality?” said Fishman. “This study gives us insight into approaches that might help us understand group behavior at the level of the individual.”

Beyond tracking swimming patterns, Fishman plans to dive deeper into zebrafish biology, looking at how neuronal activity and gene expression might connect to the behavioral changes.

Furthermore, Fishman believes the zebrafish model could be useful in future testing of potential drugs for psychiatric disease. “Perhaps there is a conservation from fish to humans of genes that direct group behavior, albeit playing out in a species-specific manner,” said Fishman. “If so, it is conceivable that zebrafish group behavior will help us better understand psychiatric disease, and even provide a method to discover therapeutics for these currently poorly treated disorders.”