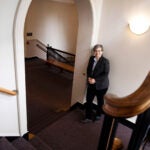 Letters for regular-action decisions sent out

Regular-action decisions were sent out Thursday evening to applicants to Harvard College’s Class of 2024, with 1,980 officially admitted. The total number of applications was 40,248.

“From their applications it is clear that the Class of 2024 will bring to Harvard extraordinary talents, ideas, backgrounds, and life experiences,” said William R. Fitzsimmons, dean of admissions and financial aid. “We look forward to giving them a preview of what Harvard College has to offer during our Virtual Visitas program and getting to know them over the next four years.”

Based on projections, more than half of the class will receive need-based grants, allowing families to pay an average of $12,000 annually. Harvard will require no contribution from nearly 23 percent of the families, representing those with annual incomes below $65,000. The students in this group will also receive $2,000 start-up grants to help with move-in costs and other expenses incurred in making the transition to College.

In addition, earlier this month, Harvard announced it would further expand its financial aid program by eliminating from aid awards the summer work expectation beginning in the 2020–21 academic year. Students still will be expected to contribute $3,500 through term-time work to meet their estimated personal expenses.

Based on projections, more than half of the Class of 2024 will receive need-based grants, allowing families to pay an average of $12,000 annually. Harvard will require no contribution from nearly 23 percent of the families.

The Faculty of Arts and Sciences (FAS) is investing an estimated $2 million to fund the program expansion. The goal is to provide aided students with more flexibility to pursue academic, public service, or internship opportunities during the summer. Since launching the Harvard Financial Aid Initiative in 2005, the University has awarded more than $2 billion in grants to undergraduates. Harvard’s budget for the group has increased more than 148 percent, from $80 million in 2005 to more than $200 million in 2019.

This year, an estimated 380 admitted students, or about 19 percent, qualified for federal Pell grants, typically awarded to students from lower-income backgrounds, up from 340, or about 17 percent, last year. First-generation students represent 19.4 percent of the class, compared with 16.4 percent in 2019.

“The College continues to invest in its core value of providing access to a Harvard education to outstanding students from all economic backgrounds, and we are pleased that our generous, need-based financial aid program is continuing to inspire applicants to apply,” said Jake Kaufmann, Griffin Director of Financial Aid. “Additionally, all aided students now have the added benefit of Harvard’s elimination of the summer work expectation, which we hope allows them to pursue summer internships, research, or public-service opportunities.”

At Harvard, families with incomes from $65,000 to $150,000 pay no more than 10 percent of their annual income. Loans are not required of students, and families who make more than $150,000 are generally eligible for aid on a sliding scale, depending on their particular circumstances, such as multiple children in college or unusual medical or other essential expenses.

The Class of 2024 reflects the increasing diversity of the College’s applicants, with 14.8 percent identifying as African American/black, 24.5 percent as Asian American, 12.7 percent as Latinx, 1.8 percent as Native American, and 0.4 percent as native Hawaiian. Women account for more than half, 51.6 percent, of all those accepted to the class.

In recent years, Harvard has increased its efforts to recruit individuals who have served in the U.S. military, working with groups affiliated with the Defense Department and joining the Service to School’s VetLink program in 2017. Thirteen veterans were admitted to this year’s class, and 47 students expressed interest in ROTC, an increase from six veterans and 41 potential ROTC candidates last year.

“We are thrilled that more military veterans are applying to and enrolling in the College than at any time in recent decades,” said Marlyn McGrath, director of admissions.

Harvard recently decided to cancel its on-site programming for Visitas, its admitted student weekend, which had been scheduled for April 18‒20. Instead, students are invited to participate in a “Virtual Visitas” the entire month of April. The program will give class members a chance to connect with students, faculty, and leadership online. Members of the Harvard community are encouraged to share videos on social media and use the hashtag #Visitas2020 to welcome next year’s new class.

Staff members of the Griffin Financial Aid office will be available to speak with students and their families starting now and through the month of April to help them as they make their final college choices.

Students will have until May 1 to reply.