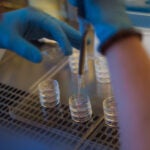 It’s long been known that endurance athletes have larger hearts on average than the rest of the population and that cardiac enlargement is a healthy adaptation to exercise.

But what wasn’t known until now was whether the aorta — the main artery leaving the heart and supplying the body with oxygenated blood — followed suit, and if it did, whether that might pose problems as athletes aged.

“The prevailing wisdom is that the aorta is a relatively stable structure with minimal plasticity,” said Aaron L. Baggish, investigator in Massachusetts General Hospital’s (MGH) Cardiovascular Performance Program. “But this concept comes from  studies done almost exclusively on young competitive athletes — typically under 25 years of age.”

As a sports cardiology fellow at MGH’s Cardiovascular Performance Program, Timothy W. Churchill, noticed that a surprisingly high number of master athletes — the rapidly growing population of aging men and women who continue to train and compete into middle age and beyond — were coming in for evaluation of aortic enlargement. Churchill proposed pinning down the actual prevalence of this characteristic.

So in 2018 Baggish, Churchill, and their team undertook a cross-sectional study evaluating aortic size in 442 veteran endurance athletes aged 50 to 75 years who were taking part in athletic competitions across the United States.

“We set up study sites  at several large-scale rowing and running events that attract high-caliber masters athletes, and did cardiac ultrasounds at the race venues,” Churchill said.

They found that a high percentage of athletes — 20 to 25 percent — had aortas larger than the upper limit of clinical normality. “It was proof of concept for us because while we’d been seeing it in the clinic for a long time, it had never been studied in an isolated fashion,” said Baggish.

The question of whether this is a good thing or a bad thing — dilated aortas in non-athletic populations put patients at increased risk for a leak or rupture, and acute events involving the aorta have mortality rates as high as 50 percent — remains open. “We want to know whether this enlargement means the same thing in an athlete as in a nonathlete,” said Churchill, a clinical fellow in medicine at Harvard Medical School (HMS).

“The findings from the study are pushing us to do more science,” said Baggish, “as there are two viable yet unresolved implications of our work. The first option is that aortic enlargement among masters athletes is a benign adaptation and another feature of the so-called athlete’s heart, where big is good. “The alternative is that being a lifelong exerciser may cause dilation of the aorta with the sort of attendant risk seen in nonathletes.”

To find out, the MGH team plans to turn this cross-sectional study into a longitudinal one, checking outcomes for the same cohort four to five years from their initial ultrasounds. “We’re now halfway through that waiting period, so it won’t be too long until we have a touchpoint,” said Baggish, an associate professor of medicine at HMS. “If we find that big aortas are a benign adaptation, doctors can be reassured when they see it and not put patients through unnecessary testing and surgery. If we find that they really are an indicator of risk, then we have to think about screening people who fit this bill. So regardless of what the next step tells us, it has very important clinical implications. For now, our goal is to alert athletes and their doctors about this evolving story”