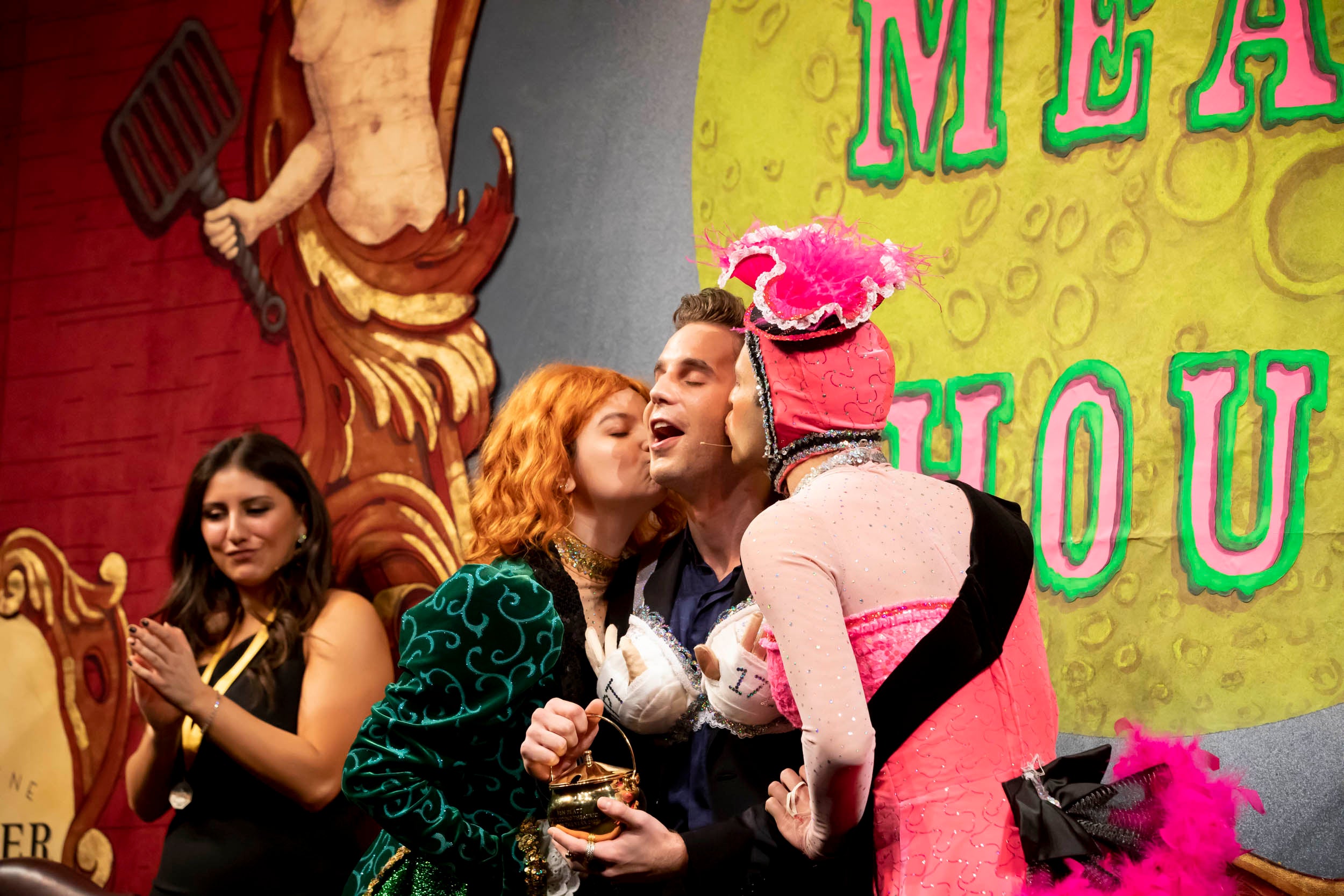 Among them: Make sure the hooks on clothes hangers are faced to look like question marks, because that’s the “correct” direction, and it makes it easier for customers to take them off the rack. Others? Put your best or newest merchandise in areas where customers tend to stop first or most often.  Don’t be afraid to put up flashy “instagrammable” window displays to draw passersby. Make your staffers feel appreciated, supported, and accountable if you want to motivate them to meet store goals.

Perhaps most importantly, however, Leight can tell you this: From the small details to big-picture strategy, starting and running a business is something that can be learned.

In short, she said, it was an experience that gave her the kind of hands-on business experience she’s wanted since starting at Harvard. It was made possible by the Harvard Student Agencies, a student organization that for the past 60 years has given more than 5,000 students similar types of business, professional, and entrepreneurial exposure.

HSA calls itself as the largest student-run company in the world, but it is probably more accurately described as a conglomerate that also has incubated startups. The registered 501c(3) nonprofit employs almost 700 students (making it the second-largest employer on campus besides the University) and currently is made up of 12 “agencies” — although it has attempted more than 70  — that run across a number of industries.

Ventures include well-known fixtures like HSA Cleaners and Dorm Essentials, which have been providing laundry, dry cleaning, and micro-fridges to the campus community since the organization’s earliest days, and spots like The Harvard Shop, which sells University-branded merchandise both in-store and online. Other outlets, which have been added over the years, include services like publishing, bartending, delivery, tutoring, advertising, market research, and web development.

The agencies are all run as individual businesses, with HSA’s corporate office acting as an umbrella. They employ students year-round, sometimes on a full-time basis, and each has its own team of managers and employees who are responsible for all operational and strategic aspects, including budgeting, invoicing, stocking shelves, writing content or code, hiring and managing staff, and setting revenue goals. For many students it’s where they first learn to craft professional emails, collaborate with others, and problem-solve in a work environment.

“You have complete ownership over your role, whether you’re at the senior management level or you’re a marketing manager,” said Leight, a psychology and economics concentrator who joined HSA as a first-year and found that she enjoyed negotiating with vendors, behind-the-scenes logistics, and the strategy that goes into keeping it afloat and driving it forward. “It’s a lot of big-picture-type thinking,” she said. It’s all about “working with the team to identify problems or areas that could use improvement and then brainstorming solutions and implementing them.”

Altogether, HSA’s subsidiaries bring in more than $7 million in annual revenue and pay out more than $1 million in student wages. Its corporate office at Burke-McCoy Hall, like the rest of the organization, is also primarily student-run, with a handful of professional staff. HSA is guided by a 26-person board of directors, who include alumni, University administrators, and students like Leight.

“I’d rather them make mistakes here, where they have a soft landing and a good support system, than make that same mistake at Goldman Sachs or when they are starting their own business.”
— Jim McKellar, HSA chief executive

“We say it’s a student-run company, and it really is,” McKellar said. “The students make the decisions, but the five of us [and board administrators] are here to teach the students. We teach them everything from reading a balance sheet to running a meeting. We’re here as a support system.”

This teaching and coaching structure plays well into HSA’s primary goal of giving members real-world experience that can help them in future careers, and is part of what makes HSA so fun and challenging for students. “It’s an intense place to work because students have full ownership,” said James Swingos ’20, HSA’s outgoing president. He has held the post since last February, and before that had helped it acquire one of its most recent ventures, a market-research business called Campus Insights.

Being entrepreneurial is key to the HSA experience. In fact, the organization is always searching for ways to expand current businesses by adding new services to them, or to start or acquire new ones. These often come as a result of market research on what businesses or services are needed and the kinds of experience students want.

The past few years, for instance, HSA has added agencies in the technology sector after market research showed there was a need for these types of services in the community and that undergraduates wanted experience in the field. Among the agencies added were Campus Insights, which was purchased in 2018 from two college students at Boston College and the University of Michigan, and HSA DEV, a web and app development company, which it started in 2017.

To get each firm launched or acquired, students crafted business plans, forecasted budgets, and presented their work to the HSA board of directors for approval.

“The board evaluates the student opportunities — how many students will this new business support, what kind of experience will they be receiving, [and] what kind of personal and professional growth opportunities exist for them,” McKellar said. Companies then have a year or two to become profitable, he added.

Both HSA DEV and Campus Insights have made steady progress. DEV is now finishing its third full year, is budgeted to break even, and continues to grow, while Campus Insights made a profit its first year and broke even the next.

“The skill set [for taking on new businesses] is really different,” said Swingos, who had to integrate Campus Insights into HSA and build his team from the ground up. “You have to think about operational buildout … customer development … marketing. You have to think from the bottom up, ‘What is the purpose of my product, why is it valuable?’ You’re the first person to think of why this is important to customers.”

Students join HSA for a variety of reasons. Some want to get managerial experience. Some want professional work experience as web designers at HSA’s development and design firm, tutors at its academic tutoring firm, or even as writers and editors at its Let’s Go travel publications. Not to be forgotten are students who just want to earn some extra spending money working as a cashier or mailbox stuffer.

Whatever the reason, HSA helps students get where they want to get professionally, or helps them discover where that is, Swingos said. Sometimes both. Take Akanksha Sah ’21, who at first was in it for the cash but is now the incoming president.

Sah took a post her first year as a business development manager at Campus Insights, a user research firm focused on Gen Zs and millennials. At the time she planned to stay in the role just for the school year to help her mother pay rent, and then take an internship at a law firm during the summer to stay on a more traditional prelaw track. But after her decisions led to tangible changes and the ability to steer the course of business, she determined she wouldn’t get this type of experience anywhere as an intern, so she decided to stay on for the summer and then fully committed to it for the rest of her undergraduate career.

“HSA gives you skills that you can definitely apply in any situation,” said Sah. “So even if I wasn’t doing a traditional prelaw internship, it’s not like I wasn’t gaining skills that would help in law school.”

“It’s an intense place to work because students have full ownership.”
— James Swingos ’20

In fact, it’s that ability to step almost immediately into high-level positions, make decisions, and even take risks that makes HSA competitive with typical internships. “That value proposition is really about a person who really wants to be highly integrated with something they can really change, that makes real revenue, that does real business, and has real clients,” Swingos said. Also, it “gets freshmen managers and sophomore managers all the time. We take people with no experience, train them, put them in those positions, and help them grow and make sure it’s safe.”

Training usually takes place over a semester and is done by whoever is in the role at the time. Swingos, for instance, spent the fall semester training Sah. Leight spent that time training her own successor, while first-year Raymond Qin spent the semester training to become the operations manager for Cleaners and Dorm Essentials.

Because of HSA’s focus on learning, the organization never loses sight of the fact that its students will inevitably make mistakes. In fact, McKellar says he welcomes it.

“I’d rather them make mistakes here, where they have a soft landing and a good support system, than make that same mistake at Goldman Sachs or when they are starting their own business,” he said. “It’s a good teaching and learning environment.”

While most mistakes are on the smaller side, like forgetting to pay an invoice or botching a meeting, some can be costly. One of the biggest was brought to light in February 2018, when the Massachusetts Attorney General’s Office found that HSA had violated state labor laws and owed employees more than $46,000 in unpaid wages. The issue came from The Harvard Shop, which had not been paying its employees time and a half on Sundays or for overtime.

“When we learned of our mistake, we [the students and full-time staff ] voluntarily corrected the issue immediately to the satisfaction of the Massachusetts Attorney General and worked with our legal counsel to enact new employee policies to ensure that we were in compliance with the law,” McKellar said. “It was a terrific, and real-world, learning experience for the students. They realized that HSA is not just a student organization. It’s a group of real businesses, and we need to follow all of the state and federal laws.”

Founded in 1957, HSA started after University officials discovered students running small-scale businesses out of their dorm rooms, which put Harvard’s real estate tax exemption at risk. To keep both the jobs these businesses had created and the University’s tax exemption, Jon Monro ’35, dean of financial aid at the time, and Dustin M. Burke ’52, then-director of student employment, incorporated the businesses under the umbrella Harvard Student Agencies and made it a student organization.

For example, Darren Aronofsky ’91, an Oscar-nominated director and screenwriter best known for “Black Swan” and “Requiem for a Dream,” was a writer at Let’s Go. Deval Patrick ’78, J.D. ’82, former Massachusetts governor and 2020 presidential candidate, used to work at the bartending service and was a member of the student board. And Ken Powell ’76, former chairman of General Mills, and Andrea Silbert ’86, M.B.A./M.P.A ’92, president of the EOS Foundation, are both former HSA presidents.

As its alumni network has grown, more recent alumni have formed an HSA alumni graduate board, which helps them keep in touch with what’s happening at HSA and mentor and connect current students with externships.

For Swingos, who will become part of that network in May, it all shows the impact HSA has had on students and will continue to have on its next batch of managers.

“At the end of the day, it’s about creating as many undergraduate campus jobs as possible” and having those roles provide students with skills like teamwork, leadership, and accountability, Swingos said.