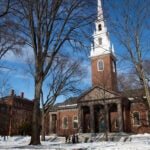 Diana L. Nelson ’84, a leader in both the private and nonprofit sectors known for her strong commitment to education and her wide-ranging governance experience, will become the newest member of the Harvard Corporation, the University announced on Monday.

A former member of Harvard’s Board of Overseers, Nelson will join the Corporation on July 1.

“Diana Nelson has been one of her generation’s most devoted Harvard alumnae,” said William F. Lee, senior fellow of the Corporation. “She knows the University well, she has a passion for education, and she brings a remarkable breadth of experience in governance roles. We are sure to benefit from her thoughtfulness and insight, and we look forward to welcoming her back to Harvard’s governing boards.”

Nelson served until August 2019 as chair of Carlson Inc., whose portfolio includes CWT, a leading provider of travel management services around the globe. She will become co-chair of Carlson’s parent company, Carlson Holdings, in May.

A longtime leader in Harvard alumni and alumnae circles, Nelson has co-chaired the Harvard College Fund, chaired its task force on women and leadership, co-chaired a Faculty of Arts and Sciences task force on the undergraduate experience, and served on the Radcliffe Institute’s dean’s advisory council. At the University level, she served as an Overseer from 2010 to 2016, including as vice chair of the board’s Executive Committee, and was a co-chair of The Harvard Campaign, which concluded in 2018. She has co-chaired her class reunions every five years since 1994.

“I am deeply honored to join President Bacow and my future Corporation colleagues in serving to support and advance Harvard’s mission,” Nelson said. “Harvard is a powerful engine of opportunity for students, the broader community, and society at large. Thanks to its capacity for constant renewal, and the creativity and dedication of its people, I’m confident the University will meet new challenges and be an ongoing force for good.”

In the nonprofit sphere, Nelson has dedicated herself especially to organizations focused on education, the arts, and children. A former trustee of both the Allen-Stevenson School in New York and the San Francisco Day School, she has also been closely involved with both Teach For America and KIPP (Knowledge Is Power Program), a nationwide network of public college-preparatory charter schools. She is a trustee of the Carlson Family Foundation, which has a focus on mentoring programs for at-risk children and youth. She is currently president of the board of trustees of the San Francisco Museum of Modern Art, and she is a past vice chair of the board of the Children’s Museum of Manhattan. In addition, she is a trustee of Common Sense Media, dedicated to educating families on how children can navigate a world in which media and technology play a pervasive role. She previously chaired the board of the World Childhood Foundation USA, which works to combat sexual abuse, exploitation, and violence against children in countries worldwide. In 2007, Queen Silvia of Sweden recognized her with the WCF’s Founder’s Award for her work on behalf of exploited children.

Nelson’s service on Harvard’s Board of Overseers included four leadership roles: vice chair of the board’s Executive Committee, chair of its Subcommittee on Visitation, co-chair of the Joint Committee on Alumni Affairs and Development, and chair of the Committee on Finance, Administration, and Management. Throughout her six years on the board, she was also a leading member of the Committee on Humanities and Arts, reflecting her undergraduate days as a fine arts concentrator and an active member of the Harvard College theater community. She has served on the visiting committees for the College, the Art Museums, and the Graduate School of Education.

After graduating from Harvard College, Nelson received her master of management degree from Northwestern University’s Kellogg School of Management. Raised in Minnesota, she now lives in San Francisco.

Known formally as the President and Fellows of Harvard College, the Harvard Corporation is the oldest corporation in the Western Hemisphere. Chartered in 1650, the Corporation exercises fiduciary responsibility with regard to the University’s academic, financial, and physical resources and overall well-being. With 13 members, the Corporation is one of Harvard’s two governing boards. Members of the other, the Board of Overseers, are elected by holders of Harvard degrees.