The next decade in science 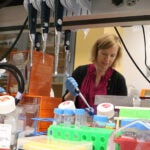 The ball has dropped on a new year and a new decade, as we move from the 2010s into the 2020s. The last 10 years have seen incredible advances in science and technology, including a dramatic reduction in the cost of genetic sequencing, the first successful uses of gene therapy in humans, and the existence of gravitational waves. But what about the next decade? What previously impossible things will humans achieve? The Wyss Institute for Biologically Inspired Engineering at Harvard University asked its faculty members across a wide range of scientific disciplines what they predict will be the most impactful developments in their fields between now and the year 2030.

Pushing the limits of biology

“By 2030, we hopefully will see human clinical trials being run on transplanted organs from highly edited pigs and proteins from recoded genomes. Whole-genome sequencing may become a high-quality, equitably priced alternative to expensive gene therapies for rare diseases. Imaging will move in for close-ups (5 nm resolution) and every pixel will tell its story (DNA, RNA, protein, and lineage). Finally, we hope to see synthetic biology impact carbon sequestration via virus-resistant plants and algae, and cold-resistant elephants reverting arctic ecosystems to highly photosynthetic grasslands.”

“Synthetic biology is well-positioned to help advance medicine over the next decade via the development of next-generation diagnostics and gene and cell therapies. The field also has tremendous potential to enhance basic research in molecular biology, by enabling the creation of novel tools to probe and analyze the complex functions of biomolecular components and systems in living cells.”

“The biggest knowledge gap, and frontier of opportunity, is taming the biological software that underlies embryogenesis and regeneration. Understanding the bioelectricity, biomechanics, and transcriptional circuits that allow cells to cooperate toward large-scale goals is the key to regenerative medicine, birth defects, cancer reprogramming, aging, synthetic bioengineering, and even new AI. Being able to exploit the decision-making, memory, and intelligence of cell swarms will result in transformative applications at the intersections of deep ideas in cognitive science, cybernetics, developmental biology, and computer science.”

“I anticipate the development of genetic and synthetic technologies to combat climate change and, concurrent with those developments, global discussions at all levels regarding their safe, equitable, and effective application.”
— Ting Wu, Synthetic Biology

“The engineering of biology will play a key role in the ability of the earth to support 10 billion people by implementing safe, faster, and more predictable biological systems. To feed the world and mitigate climate change, advances in synthetic biology will include increased utilization of sunlight together with mitigation of environmental contamination. The ability to respond quickly to epidemics and design better therapies will be a key advance for the field. And, as we move the needle on solving the problems on Earth, synthetic biology will also play a role in enabling and implementing the future of space exploration.”

“Therapeutic ‘robotic’ systems in the next 10 years will no longer be considered robots. Their parts and control systems will be molecularly based, and will have capabilities akin to an immune system. The boundary between living and synthetic will continue to blur over future decades, requiring even greater care in the domain of ethics.”

“The most exciting developments in the field of bioinspired therapeutics and diagnostics will be a new paradigm for drug development that combines several unique innovations into a system that is faster, cheaper, and reduces harm to animals and humans in preclinical and clinical trials. I am especially excited about our increasing ability to analyze clinically relevant human physiological and pathophysiological responses in vitro; high-throughput, phenotype-based screening of model organisms; novel molecular dynamics simulation capabilities; and the expanding application of deep learning technologies to solving specific clinical problems.”

“The next decade in drug delivery will highlight the role of cells as ‘drugs’ and ‘carriers.’ Unlike drugs of the past, cells are unique in that they are living entities and have the ability to navigate through the body and reach destinations that most traditional drugs cannot. Strategies to deliver these ‘living therapeutics’ will require novel approaches, and will create opportunities to use cells as carriers for targeting drugs to hard-to-reach tissues. Of particular interest are drugs that exploit or control the immune system for the treatment of cancer, autoimmune diseases, and allergies, among others. Strategies based on immune cells and immunological intervention will play a major role in drug delivery research and technology in the next 10 years.”

“In the next 10 years, we will begin to realize the promised rewards of personalized medicine and personalized health, moving toward a system where we monitor individuals for key biomarkers and compare those results to their own measurements at an earlier time, rather than relying on population averages that don’t reflect the wide biological variations that exist between people.”

“I expect the next 10 years will lead to the demonstration, in human patients, that immunomaterials can dramatically alter the progression of various diseases. Immunomaterials will allow physicians to concentrate immune cells where they are needed in the body, regulate their activity, and disperse them when their job is done. The materials themselves will dissolve and degrade to leave nothing foreign in the body after treatment, but will create an immune memory that prevents the return of the disease.”

“A major ongoing development in biomolecular science is encoding large numbers of single-molecule measurements into DNA records that can be read out later using high-throughput DNA sequencing. However, even future sequencing technologies will lack the bandwidth for sampling more than a small fraction of these records. Molecular robots built out of DNA, on the other hand, will be able to count and classify large sets of DNA records, and then summarize the results into brief DNA reports that can then be read out by DNA sequencing or other means. Thus, molecular robots will greatly increase the effective bandwidth of DNA-recording applications.”

“I think that materials-by-design will become closer to a reality. We will learn how to formulate new structures on many different-length scales using a variety of fabrication methods complemented by computer-assisted design and assembly. And both the structure and functionality of the materials will be determined and controlled — it will be the equivalent of precision medicine, but for materials design and synthesis.”

Rehabilitating and regenerating the body

“To date, very few medical interventions have been designed to completely restore the pre-injury movement patterns of patients with neuromotor injury — the current rehabilitation paradigm aims to rapidly attain independent walking, but patients often become independent by compensating for their injury rather than fully recovering the fast, economical, and stable gait of healthy human walking. The last decade has seen such remarkable advances in movement diagnostics, neurostimulation interventions, and wearable robotics that the next decade is poised to achieve true restoration rather than mere compensation.”

“I predict that major advances in assembling cells and tissues will emerge that will allow us to print living organs for clinical use.”
— Chris Chen, 3D Organ Engineering

“Regenerative medicine employs repair, reconstruction, and replacement as strategies to treat patients with a diseased or damaged organ or tissue. Over the next decade, our capacity to repair may be dramatically enhanced through the discovery of agents that reverse the ‘epigenetic clock,’ or eliminate or rejuvenate senescent cells. Reconstructive surgery will benefit from genetically reengineered ‘off-the-shelf’ universal donor cells and engineered whole organs that can be used for any patient. Finally, I believe that the barrier for tissue replacement will be breached through the use of human-pig chimeras, initially to generate universally compatible human red blood cells for transfusions and, subsequently, whole organs for transplantation.”

“As we start implanting organs into animals, and eventually patients, one of the most important things we will realize is the knowledge gaps we have in basic anatomy and physiology. All that we know about the functional anatomy of organs might not be enough to sufficiently mimic what we think is Nature’s anatomy and, unfortunately, there are hardly any classically trained anatomists or physiologists in the world anymore. To successfully engineer implantable organs, we need to develop the scientific talent to do the old-school physiology experiments that haven’t been done in 50 years or more to understand what we are building or need to build.”