A case study in portraiture 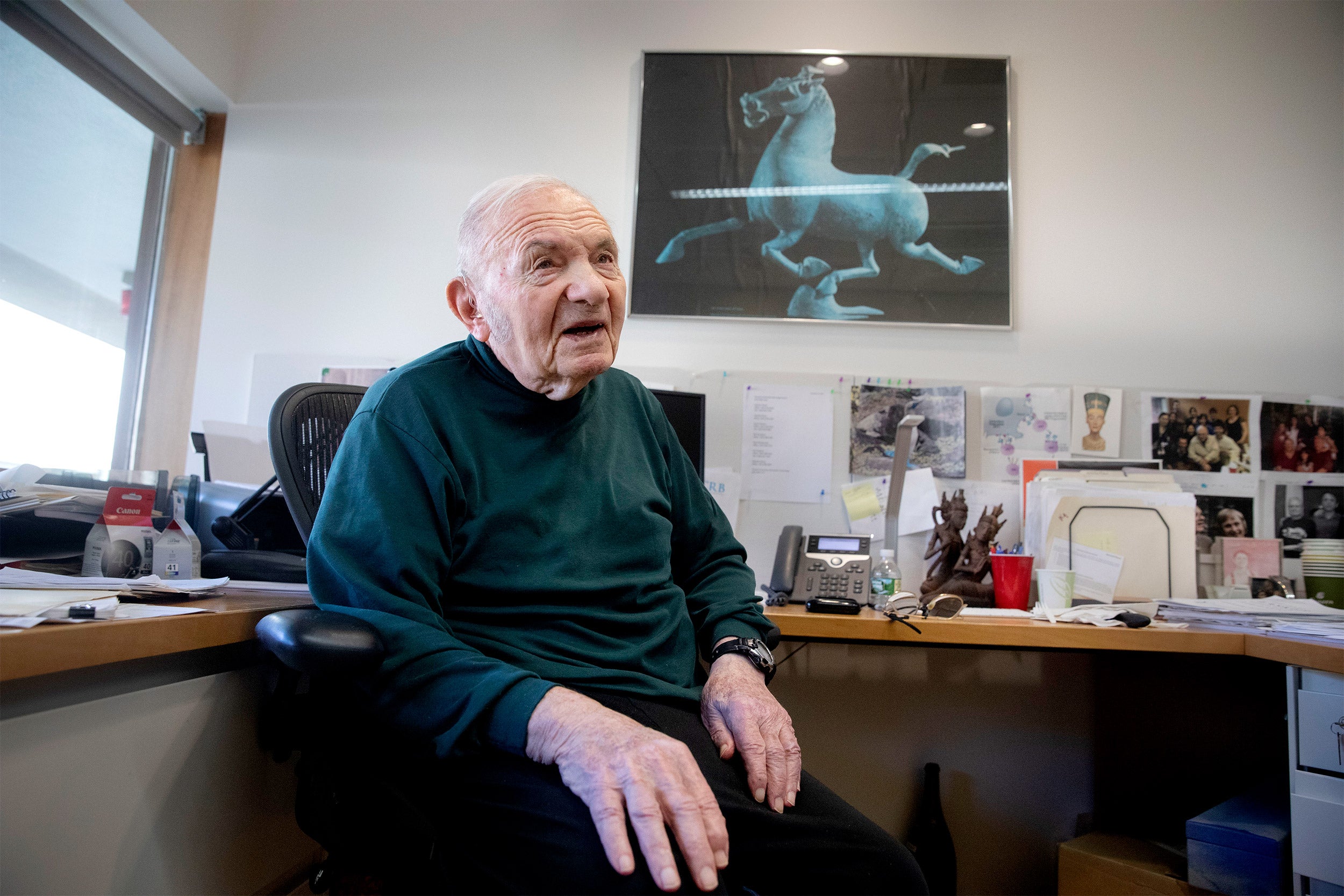 For 15 years, painter Stephen Coit (’71, M.B.A. ’77) has been quietly helping to change the walls of campus by adding dozens of portraits that better reflect Harvard’s diversity.

In a recent interview, he struggled to recall the portraits that had adorned Lowell House when he was an undergraduate except to say, “They were more decorative than inspiring.”

When Coit applied to be the artist for the Harvard Foundation Portraiture Project — launched in 2002 by the late S. Allen Counter, founder of the Harvard Foundation for Intercultural and Race Relations — Evans served on the selection committee. He said he was struck by Coit’s insistence on painstakingly researching his subjects.

“He wanted to capture, the best an artist can … that spirit behind the physiognomy,” said Evans, who in 2005 himself became the subject of one of Coit’s paintings. (Evans’ portrait is located in the Lamont Library entryway.)

Counter started the portraiture project with the goal of capturing the diversity of those who have served the University for at least 25 years with distinction.

“Allen Counter was the first one at Harvard, in the modern period, to see the potential culture-changing power of portraits on the walls of the University,” Coit said. “Before that, new portraits at Harvard had been limited mainly to outgoing presidential portraits that were hung in the rarely visited, highly exclusive Faculty Room in University Hall.”

Counter recognized that contemporary portraits of distinguished individuals “who were part of the underrepresented minorities could tell a compelling story that would be immediately apparent to all,” Coit said.

“Unlike Harvard presidential portraits, Foundation portraits would be placed in Houses, libraries, and in spaces like Annenberg, where students would view them on a daily basis, a powerful way to communicate inclusiveness at Harvard.” 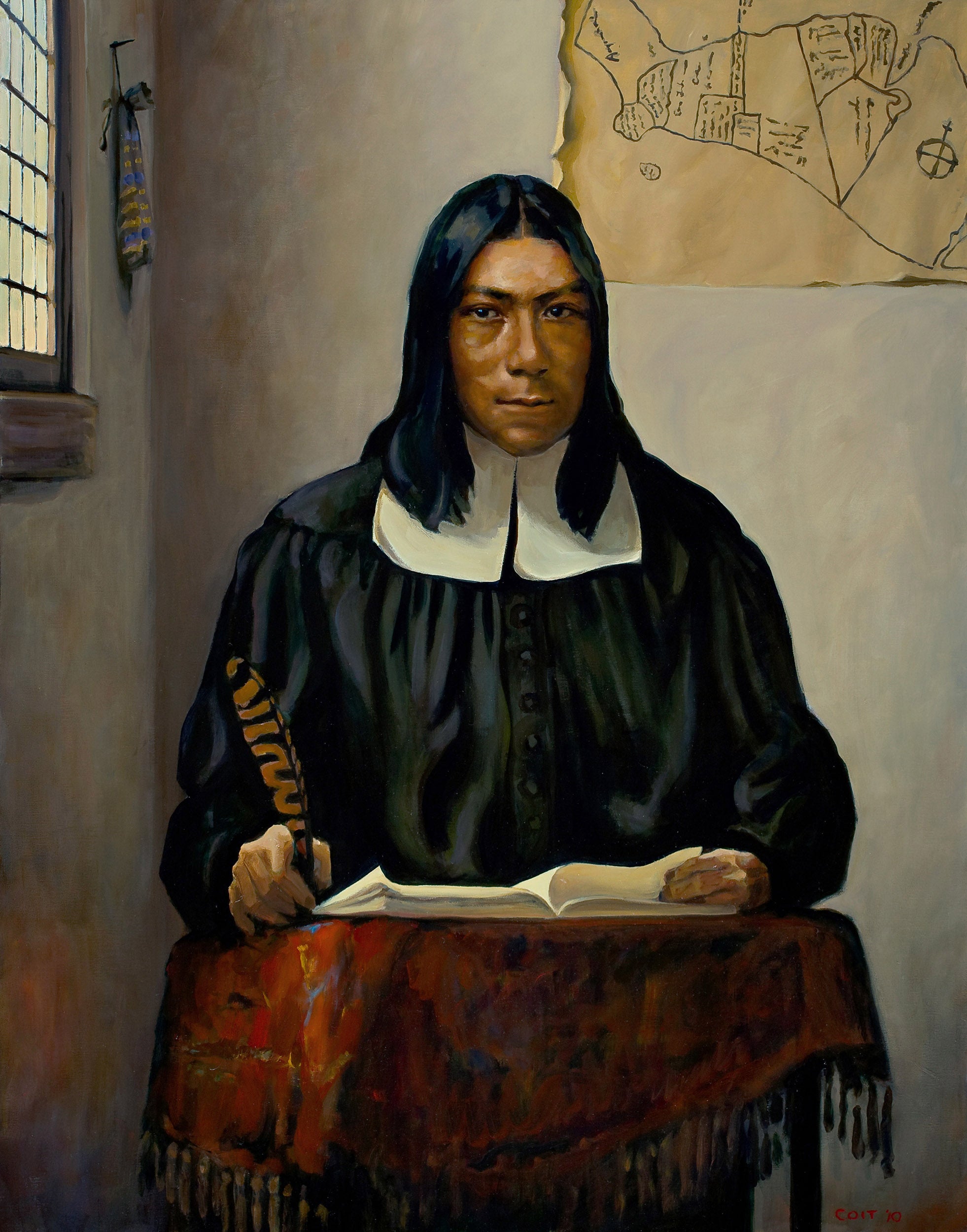 A member of the Wampanoag Aquinnah tribe, in 1665 Caleb Cheeshahteaumuck (estimated 1644-1666) became the first Native American to graduate from Harvard. He attended the Harvard Indian College, which was formally chartered in 1650 for “provisions that may conduce to the education of English and Indian youth of this Country in knowledge and godliness.” His portrait, unveiled in Annenberg Hall in 2010, symbolizes the College’s early intention that educated Native Americans play a significant role in developing positive relations between the settlers and the local indigenous communities of Massachusetts. 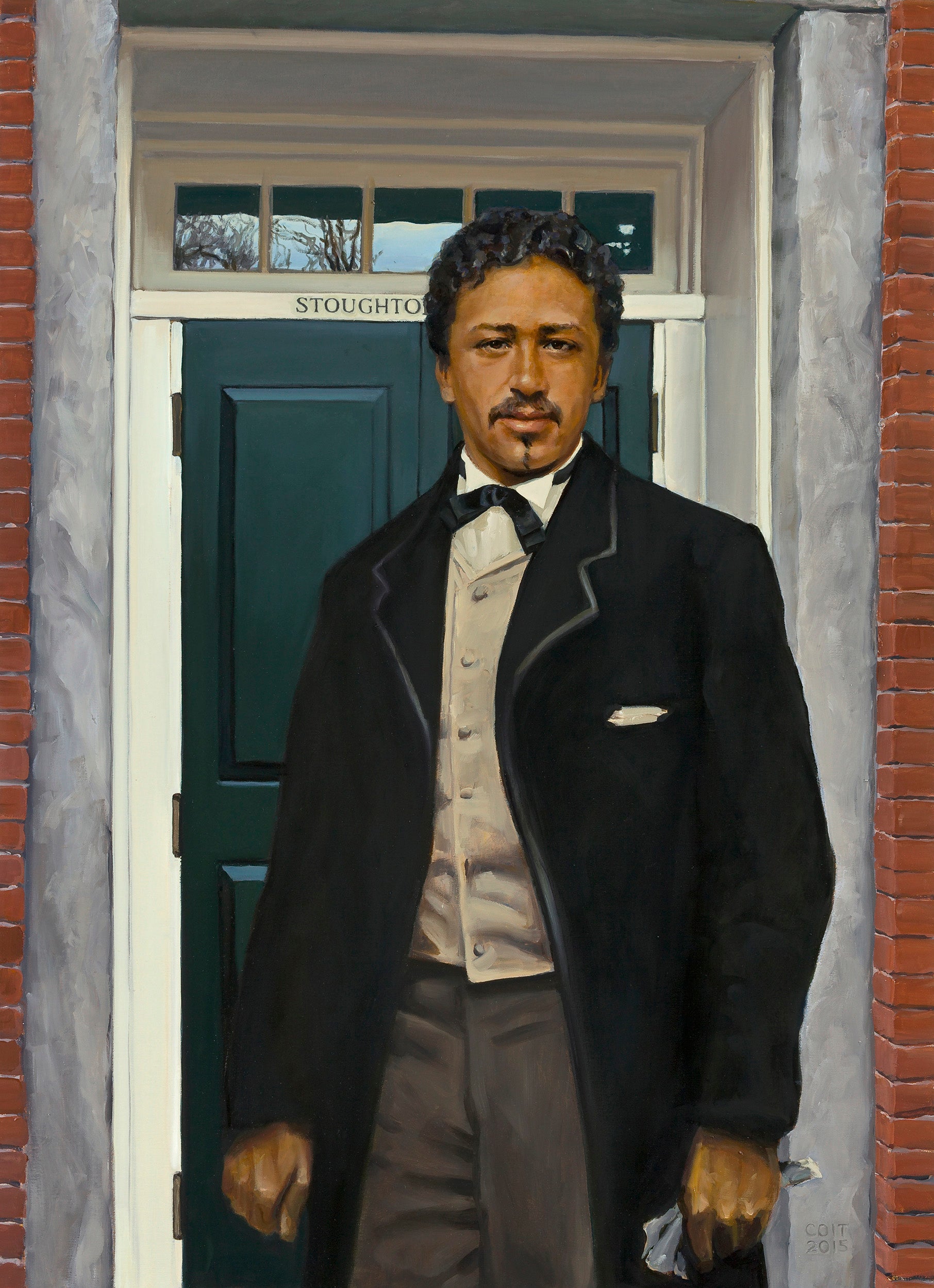 Richard Theodore Greener (1844-1922) was the first African American to earn an A.B. degree at Harvard College, having won the Bowdoin Prize for elocution in both 1868 and 1870. He eventually became the first black faculty member at University of South Carolina, where he developed the classics department and earned a degree in law. In 1878, he was appointed dean of the Howard University School of Law. His portrait, unveiled in 2016, is on display in Annenberg Hall. 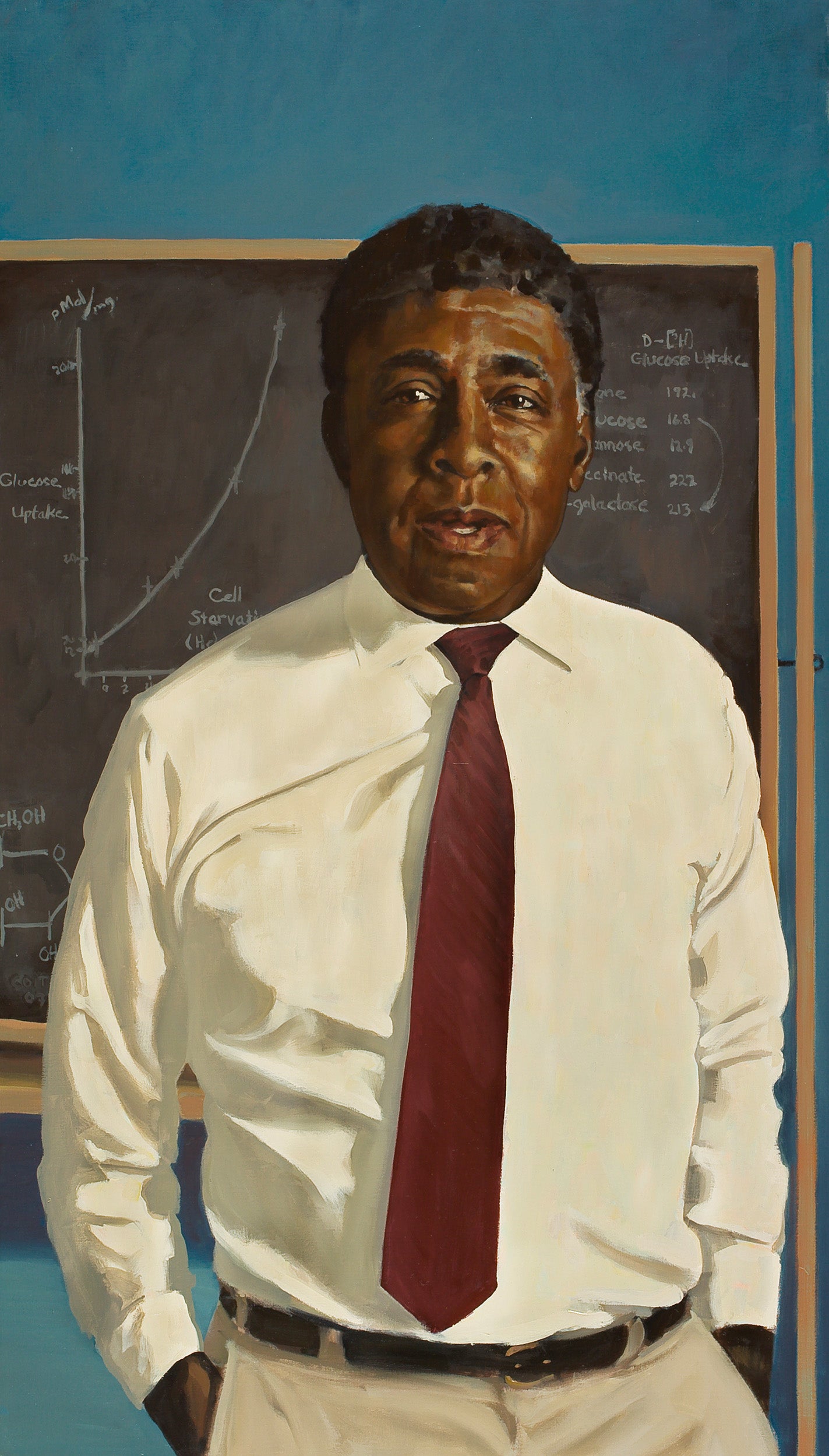 The portrait of Harold Amos (1918-2003) is on display in the Warren Alpert Building at HMS and was unveiled in October 2007. Amos, the Maude and Lillian Presley Professor of Microbiology and Molecular Genetics, taught at the Medical School and in the Faculty of Arts and Sciences for nearly half a century. He was the first African American to lead a department at the HMS, chairing the Department of Microbiology and Molecular Genetics twice, first from 1968-1971 and then from 1975-1978. 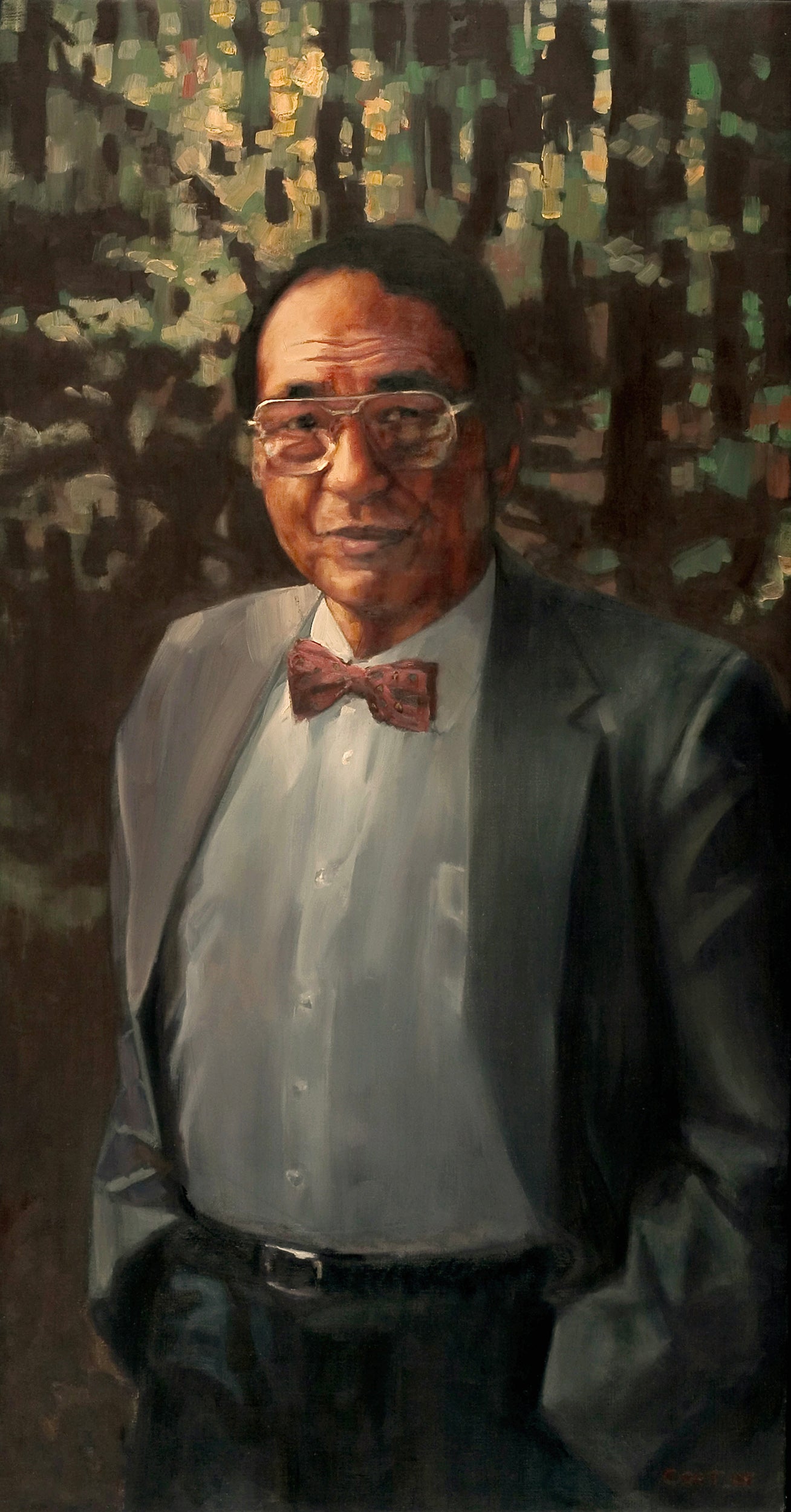 Kiyo Morimoto (1918-2004), a member of the Faculty of Arts and Sciences and a lecturer of education, taught courses at the Harvard School of Public Health, Harvard Business School, and Harvard Graduate School of Education (GSE). A decorated World War II hero with the U.S. Army, Morimoto worked for 27 years at the Bureau of Study Counsel, six of them as director. His portrait is on display in Dunster House and was unveiled in February 2008. 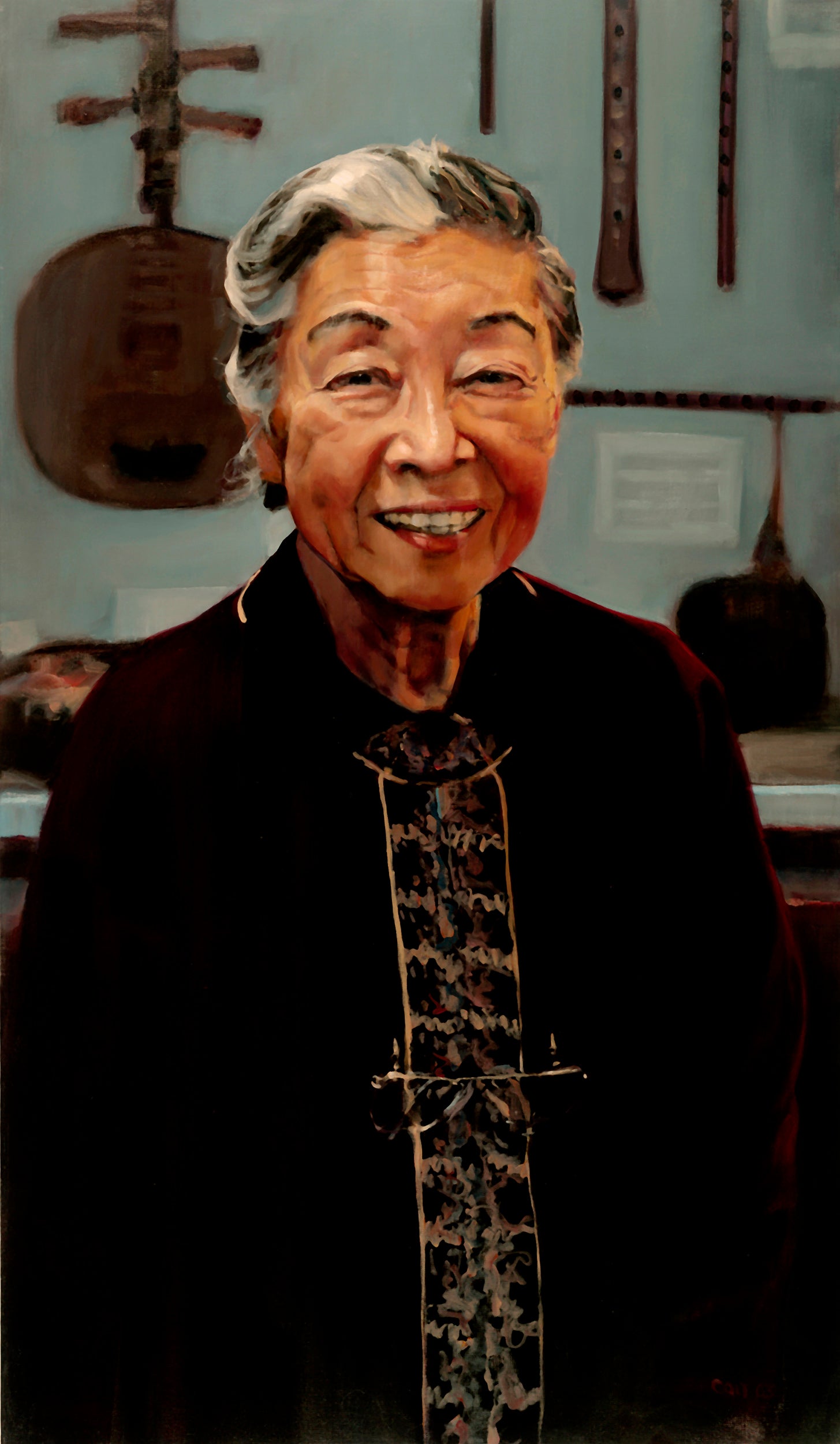 The portrait of Rulan Chao Pian (1922-2013) is on display in Cabot House and was unveiled in May 2005. Born in Cambridge, Pian earned her A.B. (1944) and A.M. (1946), both in Western music history, from Radcliffe College, and her Ph.D. (1960) in East Asian languages and music from Harvard. From 1961 until her retirement in 1992, Pian served Harvard with great distinction, first as a scholar, and then as professor of East Asian languages and civilizations and of music from 1972-1992. She was Master of South House (now Cabot House) from 1975-1978, making her the first ethnic minority to serve as House Master for any Harvard College House. 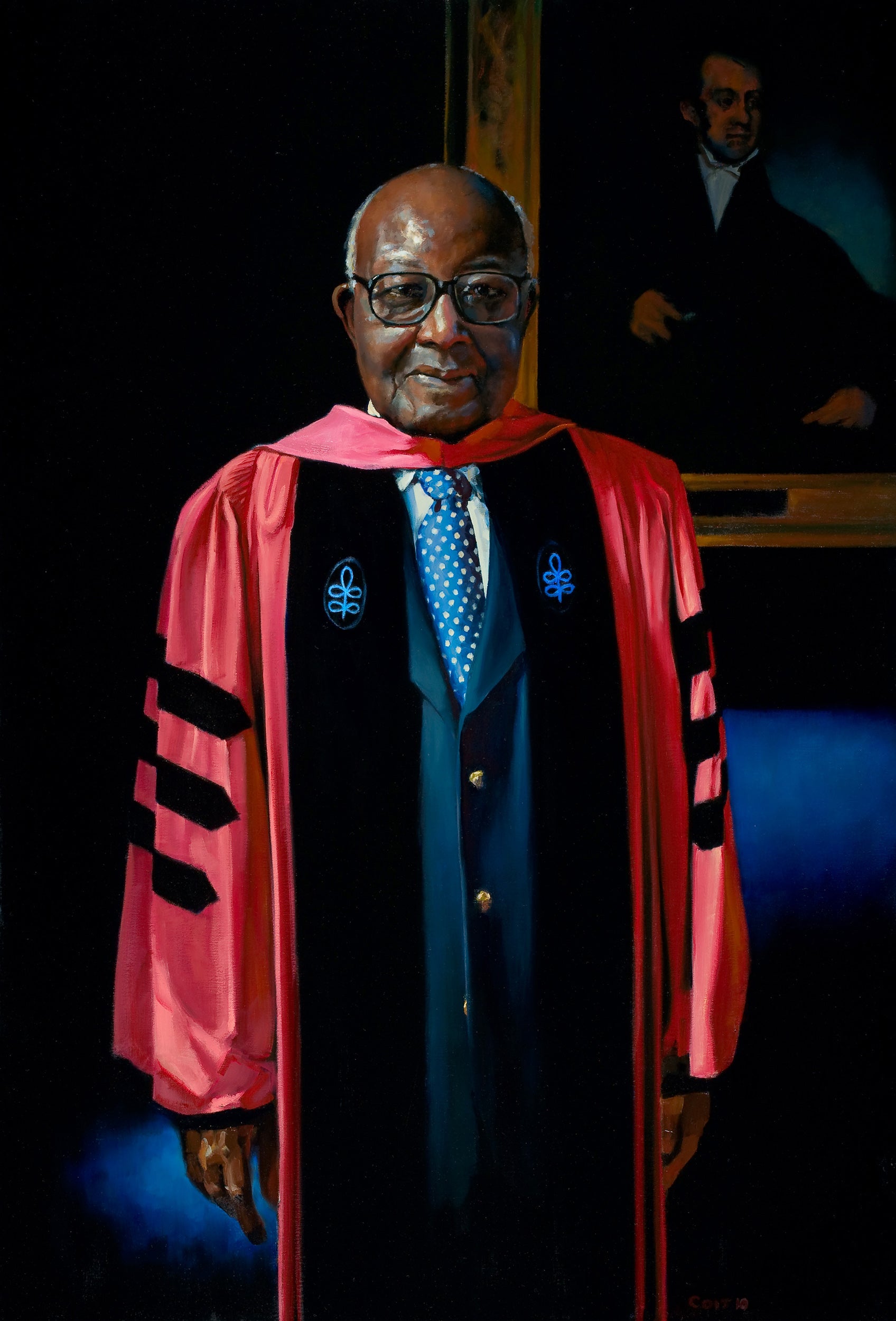 Preston Williams (b. 1926) was the Houghton Research Professor of Theology and Contemporary Change and acting dean of Harvard Divinity School from 1974-1975. He was also the first director of Harvard’s W.E.B. Du Bois Institute for African and African American Research. From 1998-2008, Williams served as director of the Summer Leadership Institute, which trains religious leaders from urban settings. His portrait, displayed in Andover Hall, was unveiled in 2011. 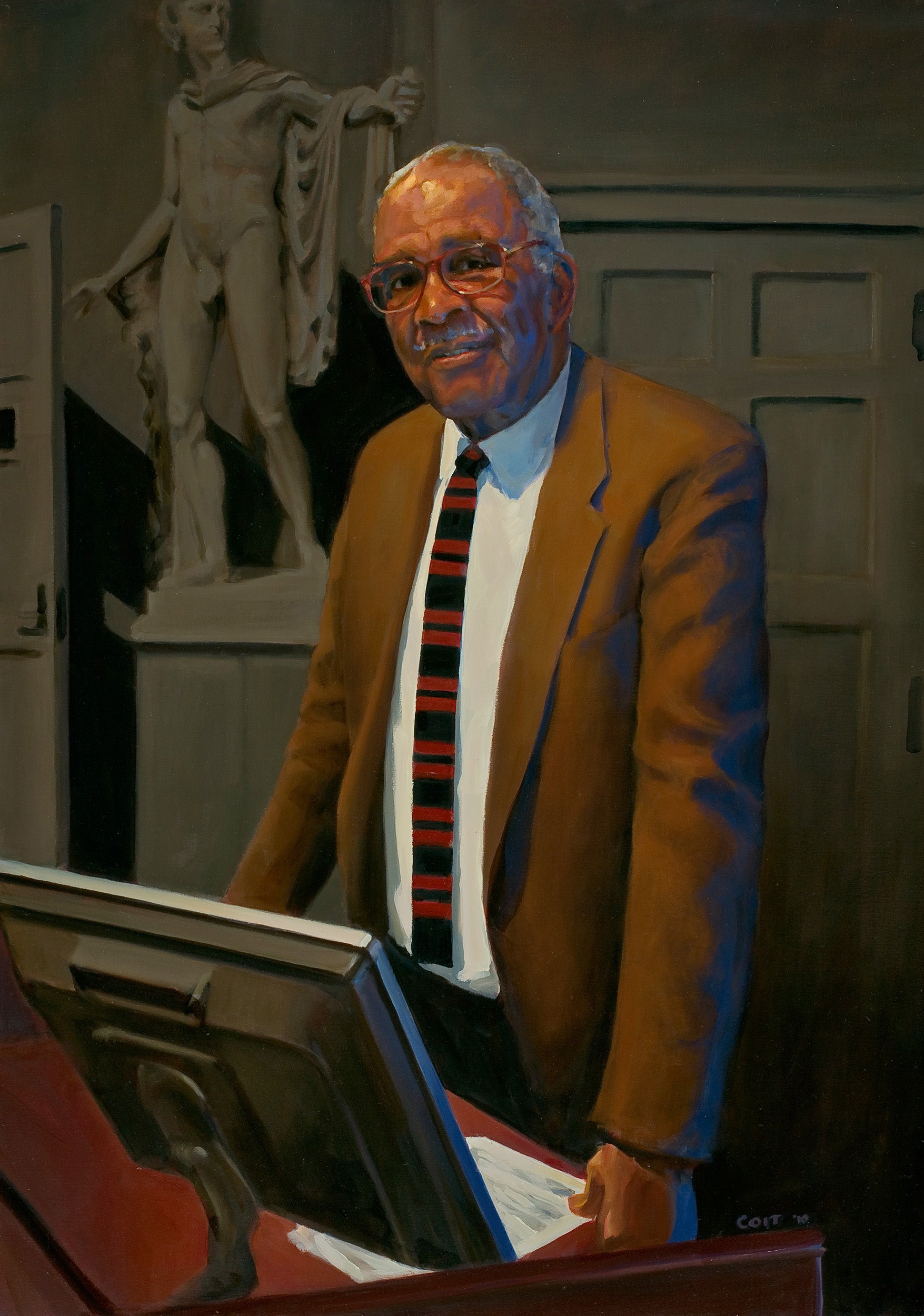 The portrait of Chester Middlebrook Pierce (1927-2016) is on display in Lowell House and was unveiled in November 2010. A distinguished graduate of Harvard College in 1948 and Harvard Medical School in 1952, Pierce served on the faculties of HMS, GSE, and the Harvard School of Public Health, and was the first African American to be a full professor at Massachusetts General Hospital and the Harvard Department of Psychiatry. A professor of psychiatry for more than 40 years, Pierce also served as a consultant for the Children’s Television Network, the Peace Corps, and NASA. 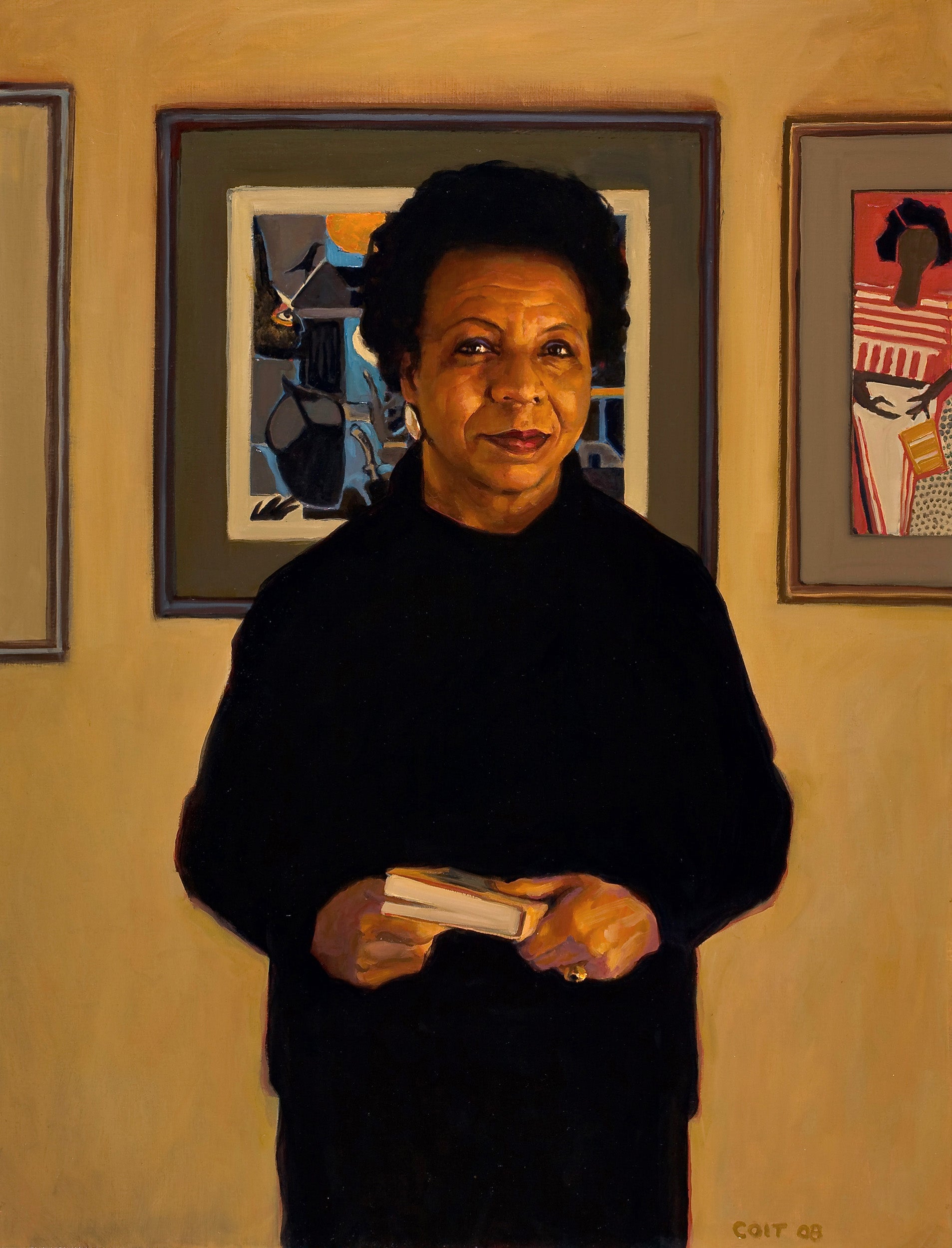 Florence Ladd (b. 1932), whose 2012 portrait is on display in Lowell House, joined Harvard in 1965 to teach at both the GSE and the Graduate School of Design (GSD). After leaving Harvard for MIT, where she became associate dean, and Wellesley College, where she was dean of students until 1984, she returned to serve as director of the Mary Ingraham Bunting Institute at Radcliffe from 1989-1997. She also held the post of lecturer at GSE from 1965-1970 and of associate professor of city planning at GSD from 1972-1977. 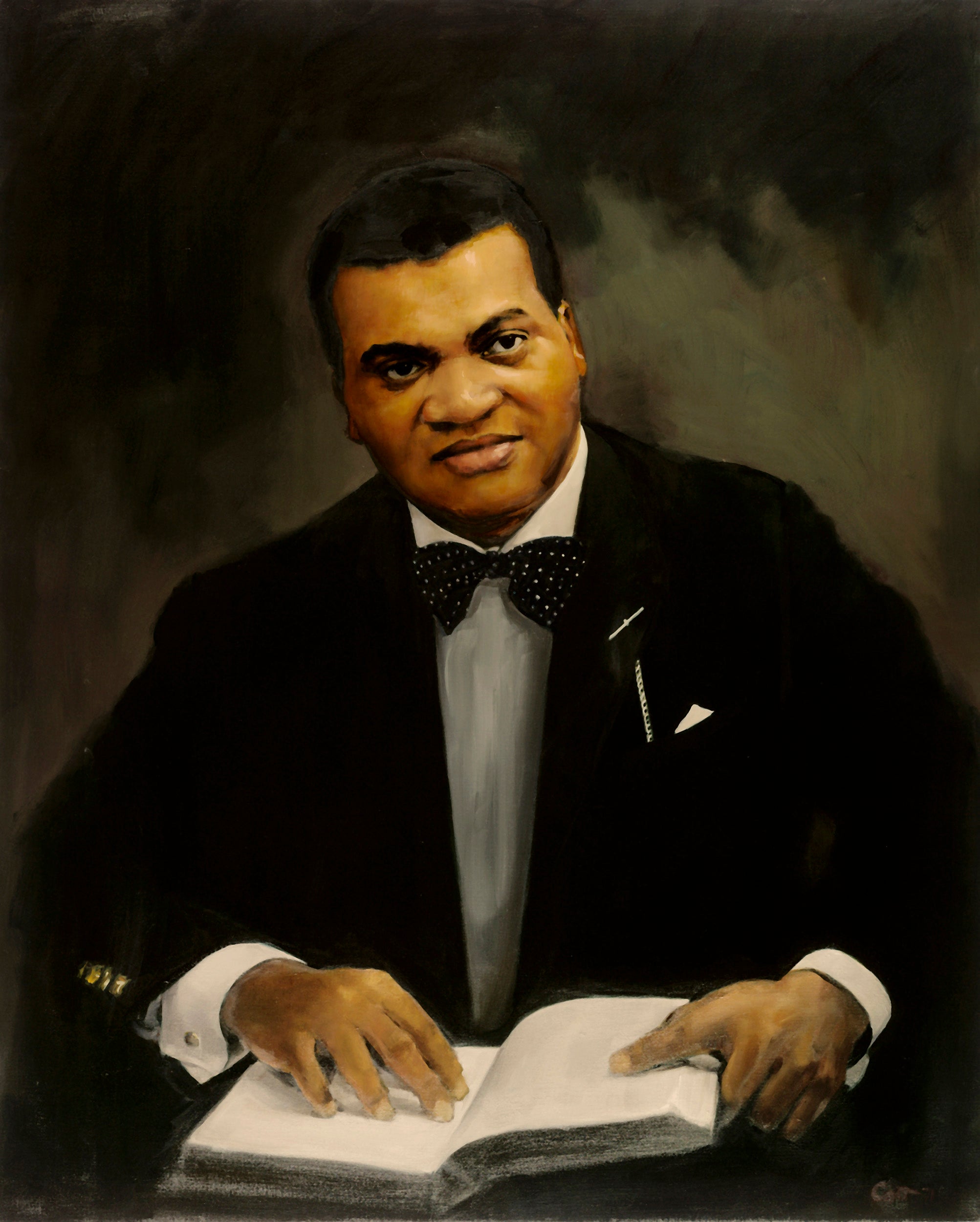 Archie Calvin Epps III (1937-2003), whose portrait has hung University Hall since 2005, earned his bachelor’s degree in theology from Harvard Divinity School in 1961. He became the College’s assistant dean of students in 1964, and was one of its first African American administrators. In 1971, Epps became dean of students and remained in the position until his retirement in 1999. 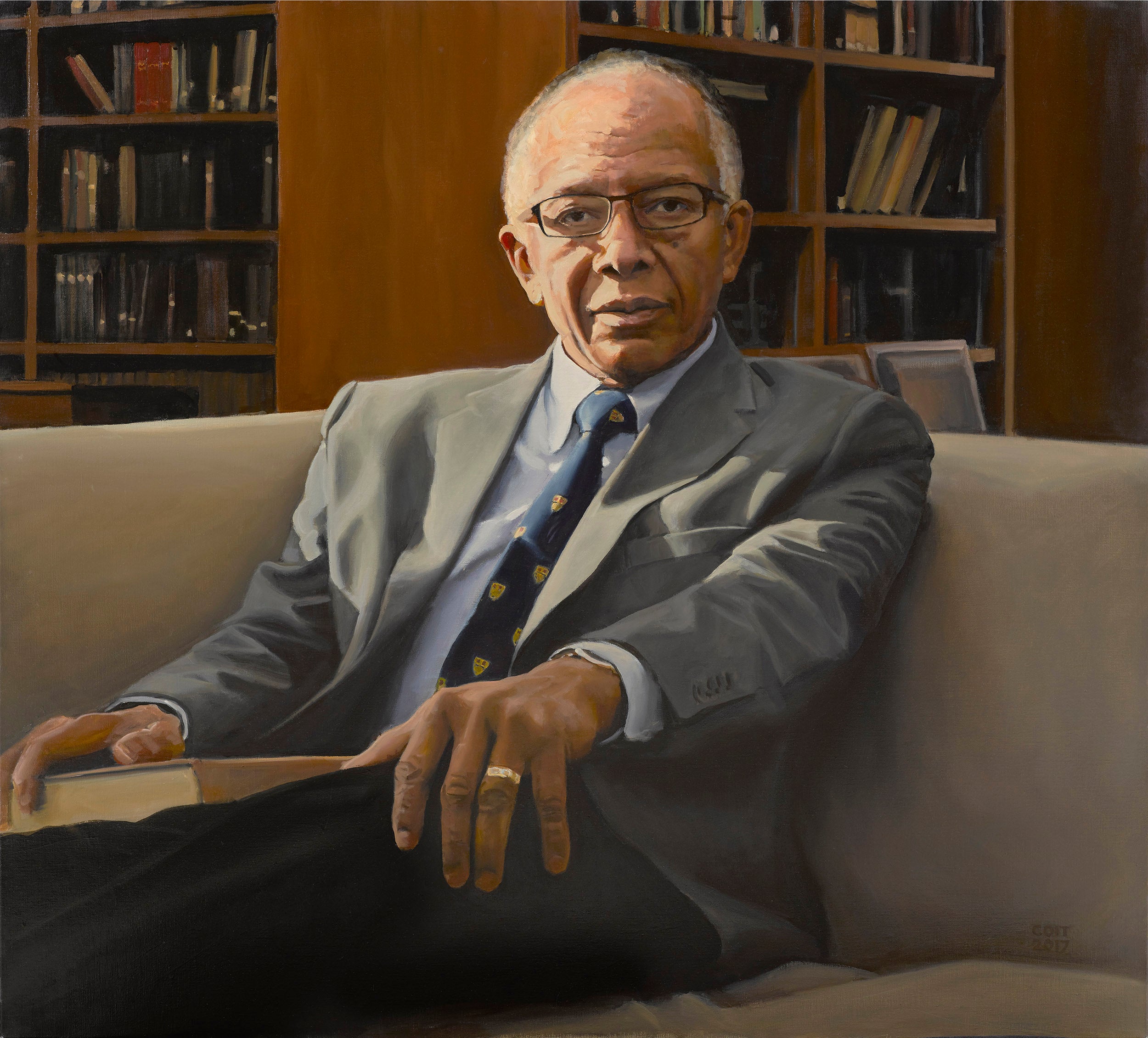 This portrait of Orlando Patterson (b. 1940) has hung in Leverett House, where he has been the Allston Burr Senior Tutor, since 2016. Patterson, the John Cowles Professor of Sociology, has also held academic appointments at his alma mater, the University of the West Indies, and the London School of Economics, where he earned his Ph.D. He also served as special adviser for social policy and development to former Prime Minister Michael Manley of Jamaica. 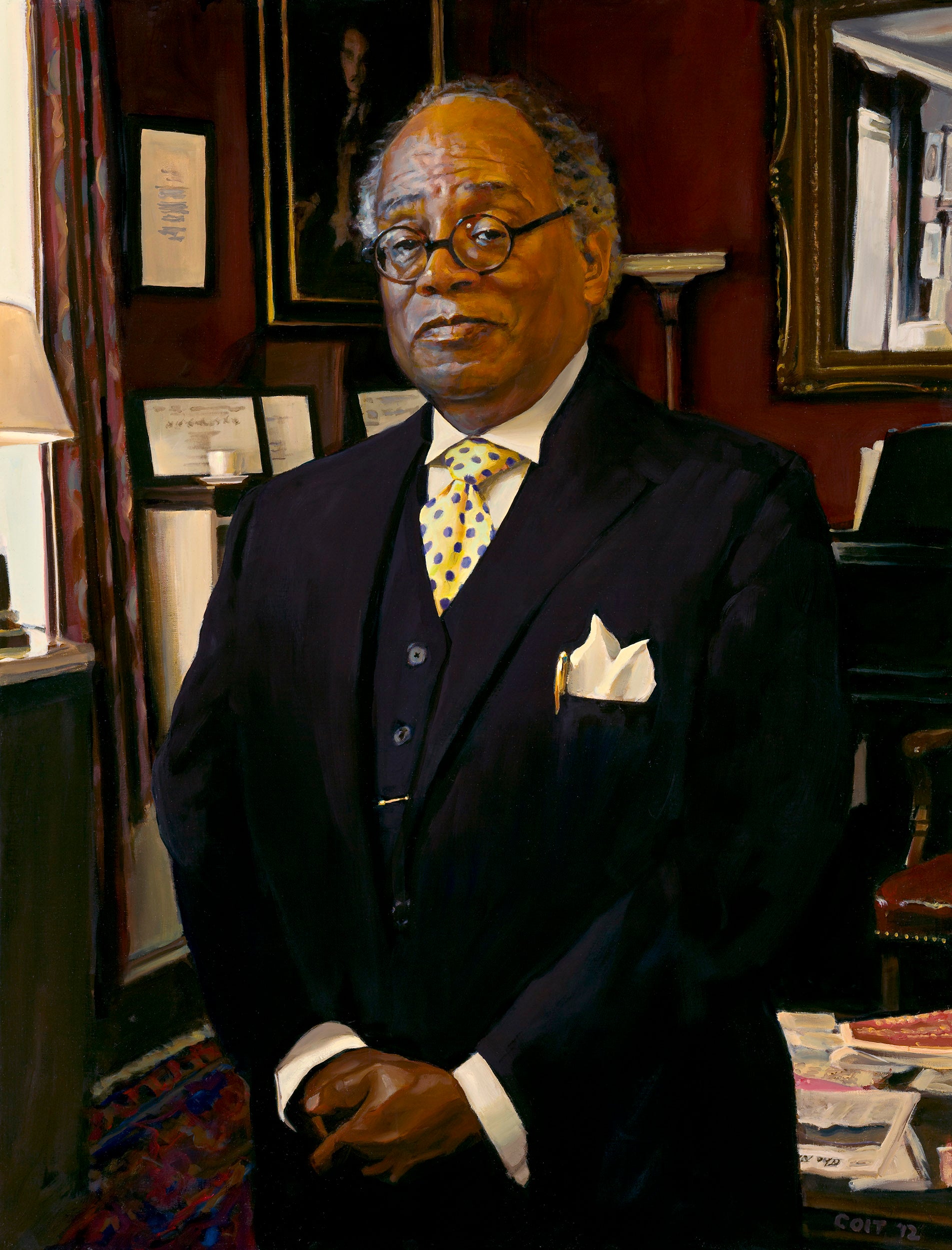 The esteemed Rev. Peter Gomes (1942-2011) was Plummer Professor of Christian Morals and Pusey Minister in the Memorial Church for four decades. He was a member of both the Divinity School faculty and the Faculty of Arts and Sciences. Gomes wrote many books, including the best-sellers “The Good Book: Reading the Bible with Mind and Heart” and “Sermons: Biblical Wisdom for Daily Living.” His portrait is on display in the Signet Society and was unveiled in 2013. 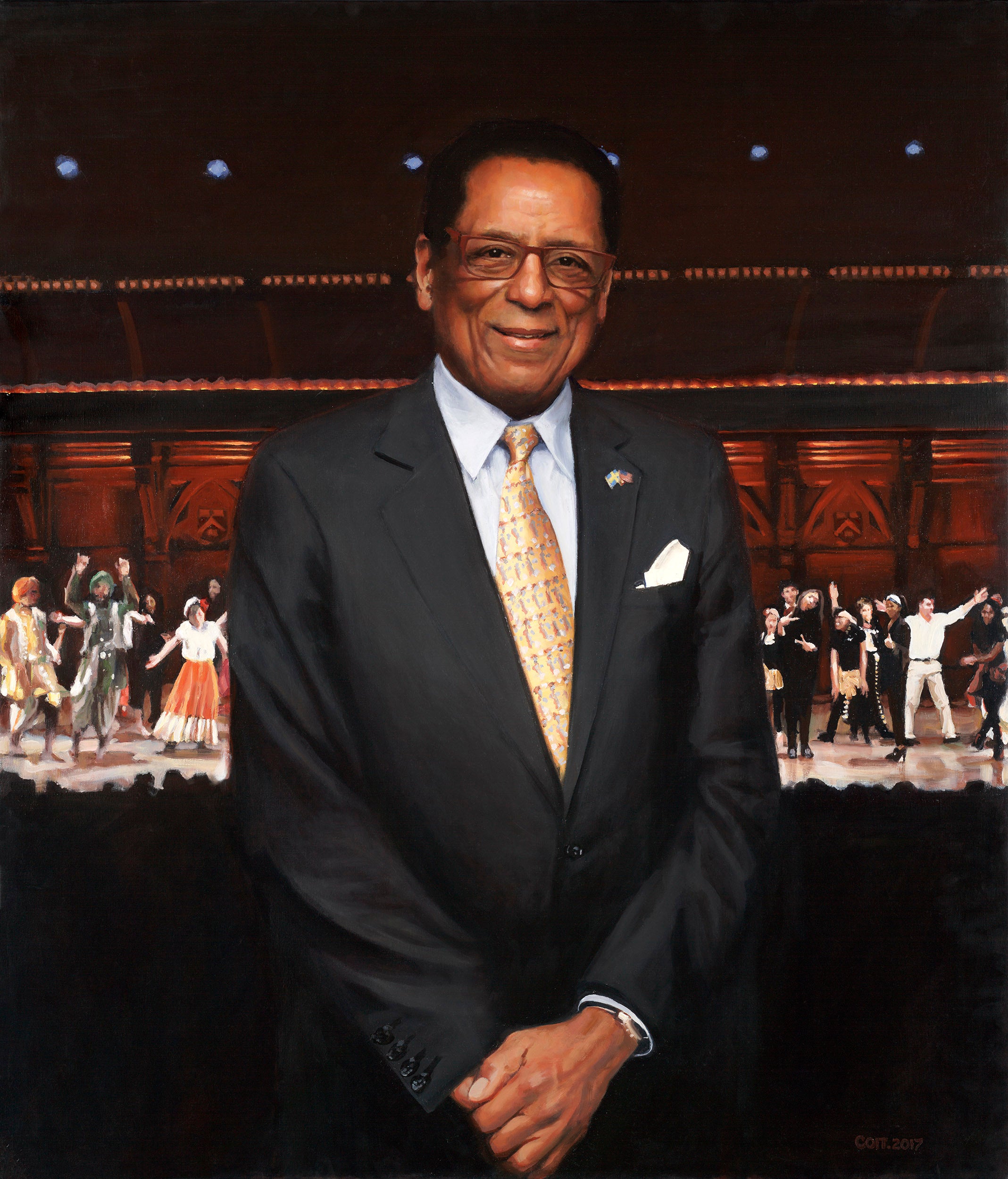 The portrait of S. Allen Counter Jr., (1944-2017), unveiled in 2018, is on display in Annenberg Hall. Counter, a neurology professor at Harvard Medical School (HMS), neurophysiologist at Massachusetts General Hospital (MGH), and director of the Harvard Foundation for Intercultural and Race Relations, was a mentor to many Harvard alumnae and alumni.
“I would always ask my subject, what do you want to say in your portrait? What is the message for future generations? … In a way, each of the portrait artists in my class are writing a case about the subject.”

Coit cut an unusual path to the visual arts from the Business School but said he uses his M.B.A. “every day in painting,” applying lessons learned working for firms such as G.D. Searle and Hewlett-Packard Corp. to his artistic practice.

“I tell many people that want to go into the arts that business school is fabulous training. … It gives you so much flexibility, so much conceptual strength, so much interpersonal strength,” Coit said. “And every good artist is an entrepreneur.”

In recent years, Coit has taught a portrait workshop during Wintersession. “I learned a lot about teaching from going to Harvard Business School. … I guess I teach portraiture by the case method.

“I would always ask my subject, what do you want to say in your portrait? What is the message for future generations? … In a way, each of the portrait artists in my class are writing a case about the subject.”

After more than 15 years, there is a closeness that Coit has achieved with his subjects.

When Freeman’s portrait was unveiled at the School of Dental Medicine, Coit reflected that his subject — the son of enslaved parents — had graduated in the School’s first class of six students only four years after the Civil War ended. It’s conceivable, Coit imagined, that Greener was in the audience as Freeman received his degree, just a year before he made history himself.

Coit closed the unveiling ceremony with, “I would like to give my congratulations to Dr. Freeman. He was a great subject.

“And it was really great getting to know him.”