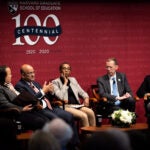 A century of making society better

From her work on “The Hunger Games” Elizabeth Banks has seen (and worn!) wigs that resemble a luminescent Vesuvius, DayGlo eyeshadow, and gowns in colors charitably described as aggressive. Though typically not while parading in the back of a convertible through Harvard Square in 40-degree weather, surrounded by dancing and cheering onlookers.

Such is the lot of the Hasty Pudding Theatricals’ Woman of the Year.

“This is a beautiful, very exciting, very unique experience,” Banks said after being recognized for her achievements by members of the Pudding. “This is a great group of artists that I’m sure will go out and improve the world we live in.”

In selecting the Pittsfield, Mass., native for the annual honor, members of the nation’s oldest theatrical organization pointed to her celebrated work as a television and screen actress and her ground-breaking turns as a female writer, director, and producer in Hollywood.

After completing her chilly tour, Banks was escorted into Farkas Hall where Hasty Pudding members showed her some of the hundreds of posters chronicling the group’s long history.

She then took a moment to add her name to a plaque displaying Woman of the Year since the tradition began in 1951, joining such luminaries as Julia Roberts, Scarlett Johansson, Kerry Washington, Helen Mirren, and Octavia Spencer.

And her day ended with the traditional celebratory roast, Pudding Pot presentation, and a preview of “Mean Ghouls,” the group’s second-ever show with a cast that includes women.

“She’s hilariously funny,” said Londeen McEachron, a Boston University student who attended the event. “In the second year that the Pudding allows women in its shows, it’s great to see a woman set the example. Times are changing, and it’s great that this is a platform for women to speak and be recognized, and it’s great that Harvard can provide that.”

The Woman of the Year Award is bestowed annually on performers who have made lasting contributions to the world of entertainment. As a movie actor Banks had starring roles in “The Hunger Games” franchise, “Love & Mercy,” and “The Lego Movie,” among others, and she is a three-time Emmy nominee for her performances in “30 Rock” and “Modern Family.”

She made her directorial film debut with “Pitch Perfect 2” in 2015 and produced, wrote, directed, and appeared in “Charlie’s Angels” last fall. She also produced the other two “Pitch Perfect” movies and is an executive producer of “Shrill,” the Hulu series which started its second season this month.

Besides her work in media Banks is also known for her involvement with the Center for Reproductive Rights, Planned Parenthood, and Turnaround Arts, among other organizations.