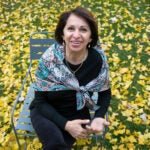 The strike began on the eve of the exam period for the fall semester, as the University and the Harvard Graduate Students Union-United Auto Workers (HGSU-UAW) continued to trade proposals on compensation, benefits, and other sticking points. University and union representatives have said they will continue to negotiate as the strike proceeds.

Picketers gathered in snowy Harvard Yard in mid-morning, and their numbers swelled to more than 500. Lines of strikers, wearing large blue-and-white “UAW ON STRIKE” placards around their necks, walked slowly around the Yard’s circumference.

The negotiations have been underway for 13 months, and the two sides have reached agreement on 12 articles. Differences remain, however, on central issues such as wages, benefits, and grievance procedures.

The University has put in place contingency plans to ensure that remaining academic work is completed, according to a Nov. 26 email to the Harvard community from Provost Alan Garber. In that message, Garber said that although Harvard recognizes the union’s right to strike, the action “will neither clarify our respective positions nor will it resolve areas of disagreement.”

“The University appreciates the vital role that our student workers play in fulfilling Harvard’s teaching and research mission,” Garber said. “Across Harvard, student workers contribute to groundbreaking research and to the academic experience and achievement of all students…. We very much hope that through ongoing good-faith efforts of HGSU-UAW and the University, we can reach a reasonable resolution that enables our students to be successful and thrive.”

In an additional statement issued Monday, the University said it is committed to addressing student workers’ concerns.

“We continue to feel a strike is unwarranted,” the statement said, noting the continuing negotiations, with both sides having exchanged counterproposals earlier this week. “The University is committed to addressing concerns that have been raised throughout this process.”

Rachel Sandalow-Ash, a third-year law student and member of HGSU-UAW’s bargaining committee, said the union is seeking the same things it was when talks started — better wages, more-affordable health care, and particular protections against harassment and discrimination.

Sandalow-Ash said, “The past few weeks and months of organizing have been really inspiring to see the energy across campus and to see student workers organizing in every department in order to build a more just and equitable campus community.”

The strike comes about a year and a half after the students — some undergraduates but mostly graduate students who work as teaching fellows and research assistants — voted to unionize and join the UAW. HGSU-UAW members voted in October to authorize a strike, and in early November the union’s bargaining committee set Dec. 3, the last day of fall classes and the beginning of the exam period, as the strike date.

University officials say the offers they have made — a 7 to 8 percent wage increase over three years, depending on student worker categories, plus additional benefits — are similar or higher than similar UAW settlements at other universities. The union is seeking a 15 percent raise over three years: an additional 5 percent increase in this fiscal year, which began July 1, on top of the 3 percent given in July, plus 3.5 percent in each subsequent year.

Much of the divide between the two sides stems from union members’ dual status as students and employees, according to the University, which has led to fundamental disagreements over which aspects of students’ Harvard roles should be bargained over as employment and which should be considered exempt as part of students’ academic roles.

For example, HGSU-UAW has proposed that if a student worker suspects a worrisome grade or other academic assessment is the result of retaliation by a faculty member, the student can take the matter to labor arbitration. The University, however, insists that such a determination would require specific expertise in a particular academic area, and it does not believe that an arbitrator would have the expertise to make such a judgment.

Students workers are also calling for the ability to take cases of harassment and discrimination to arbitration. The University, however, says that a labor arbitration that is available only to union members and not other members of the Harvard community would not meet the requirement of an “equitable investigation” under federal Title IX regulations. The union says it fears the University might conduct what it would describe as essentially an investigation of itself, and it prefers a neutral third party. The University has countered by pointing to the Office for Dispute Resolution’s (ODR) staff of trained investigators. It also notes that University procedures include the ability to appeal findings of an ODR investigation to an impartial panel, with the ability of either party in a case to object to a potential panelist based on a potential conflict of interest.

The union also has proposed making changes to the Student Health Insurance Plan (SHIP), which is available to all 23,000 Harvard students. The University has said it is not appropriate to negotiate the terms of SHIP in a contract that applies only to a subset of the student population. The union proposals call for increased benefits in areas such as dental coverage and mental health services. The University has sought to address these needs by creating new funds to provide financial assistance for health and dental insurance premiums. Additionally, the University has proposed a $300,000 fund to provide financial assistance for child care expenses. While the union supports the concept of a financial assistance fund, it wants the amount to be higher, and it seeks eight weeks of paid and four weeks unpaid family and medical leave.

The strike comes against the backdrop of possible regulatory changes by the National Labor Relations Board (NLRB). William Gould, former NLRB chair and the Charles Beardsley Professor of Law, emeritus, at Stanford Law School, said he expected the NLRB to take up a proposed regulation that effectively repeals the Obama-era change that allowed students at private colleges and universities to unionize. Many observers expect the NLRB to reverse the Obama administration stance.

Gould said the regulatory history of graduate student unionization has been muddied by conflicting NLRB actions, which have made building a coherent legal and regulatory history problematic. He also said it is not unusual for initial union negotiations to be difficult.

“This is negotiating a first contract. Those contracts are always more difficult when you’re establishing a relationship which is embryonic,” Gould said. “You’re dealing with a lot of concepts that are new to both sides … so that’s likely to be the stage at which you’re going to have more problems than otherwise.”

As of Tuesday, here’s where the two sides stood:

On wages, the University has proposed the 7 or 8 percent raise over three years, depending on work category, and to raise the minimum rate for student workers to $15 per hour. The union’s latest proposal calls for the increases of 15 percent over three years, as well as a minimum hourly rate of $25 per hour.

On benefits, Harvard is offering more than $700,000 in financial assistance funds for student workers. Specifically, it would provide $300,000 to defray student spouse and child health care premiums, $100,000 for dental coverage, $300,000 for child care reimbursement, and $25,000 for emergencies, including travel in case of death of a family member. Union negotiators are seeking 90 percent coverage of dental premiums, a $500 yearly out-of-pocket maximum for mental health coverage, and 65 percent health insurance premium coverage for adult dependents and 100 percent for children. It is also seeking a $650,000 fund to support students’ child care needs.

On sexual harassment and discrimination matters, the union has proposed a traditional labor arbitration, saying a more-neutral process is needed to guard against complaints being ignored or swept under the rug. The University doesn’t view such a process as consistent with its obligations under the Title IX statute. The University opposes subjecting students to cross-examination in an adversarial setting, a common component of standard labor arbitration. Harvard has proposed adding union representation to the existing Title IX Policy Review Committee, which recommends ways to strengthen procedures, and creating two committees, with HSGU-UAW representation, to deal with other forms of alleged discrimination and misconduct.