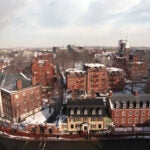 A memorial service is planned for 1 p.m. Dec. 7 at the Harvard Unitarian Universalist Church in Harvard, Mass., where Kronauer was a member since 1954.  A reception will follow at the home of Mr. and Mrs. Charles Kronauer in Harvard.  All faculty, students, and friends are welcomed.

Kronauer, M.S. ’48, Ph.D., ’51, had completed another paper with Harvard Medical School, which was published several weeks before his death.

Though experienced with research in both fluid mechanics and applied mathematics, he was primarily known for his pioneering work in mathematical biology, especially research on human circadian rhythms. Kronauer’s 1982 paper “Mathematical model of the human circadian system with two interacting oscillators” outlined a new method for understanding the biological circuits that underlie daily body cycles in variables such as blood pressure or body temperature. Kronauer’s research also had direct implications for the causes and possible cures for many types of sleep disorders, and for this he received the Farrell Prize in Sleep Medicine in June 2008.

He is survived by his three children, Karen Edwards Kronauer, Charles Richard Kronauer, and Anne Kronauer Saetren; and six grandchildren.