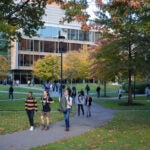 Professor and his work empowered activists and leaders

James J. McCarthy, Alexander Agassiz Professor of Biological Oceanography and director emeritus of the Museum of Comparative Zoology, died on Dec. 11 after a long battle with pulmonary fibrosis. He was 75.

A champion of the environment, McCarthy, known as Jim, was committed to both education and advocacy about climate change.

“A profound lesson from the past few decades of scientific discovery across the Earth and life sciences is that the weight of the human footprint on essential life-supporting services of the Earth system has grown dramatically since the time of Darwin,” he wrote in 2009 in an article for the journal Science, “Reflections On: Our Planet and Its Life, Origins, and Futures.”

“Could Darwin have imagined that so soon in Earth history a single species would be altering the prospects for the survival of other species across all continents and to the greatest depths of the sea?” he wrote.

Committed to the application of science to public policy, McCarthy led numerous international scientific efforts to alert the world to the effects of climate change. The founding editor of the journal Global Biogeochemical Cycles, he also served as co-chair of the Nobel Peace Prize-winning Intergovernmental Panel on Climate Change, as a lead author of the 2005 Arctic Climate Impact Assessment, and as president of the American Association for the Advancement of Science in 2008. In 2012, President Barack Obama appointed McCarthy to the U.S. Arctic Research Commission. In 2018, he received the prestigious Tyler Prize for Environmental Achievement for his work on phytoplankton productivity amid climate change, and his outstanding leadership in the field of science policy. McCarthy shared the award with fellow biological oceanographer, Peter Falkowski, of Rutgers University.

A dedicated fly fisher who angled for trout in his spare time, McCarthy’s scholarship steered him toward the sea. His primary research focused on plankton, and his work on nutrient controls on ocean productivity resulted in many awards, including the New England Aquarium’s David B. Stone Award (2005) for distinguished service to the environment and the community, and the Museum of Science’s Walker Prize, which recognizes “meritorious published scientific investigation and discovery” (2008).

“Nobody communicated the importance of the climate crisis in the context of the oceans as eloquently and passionately as Jim.”
— Al Gore, former vice president

Ken Kimmel, president of the Union of Concerned Scientists, remembered his colleague and former USC board chair on its website, calling him “a passionate advocate for the essential role science plays in our democracy” and “a key architect in the formation of our Center for Science and Democracy in 2011.”

Many of his fellow scientists and environmentalists and former students posted on a memorial page set up by the Harvard University Center for the Environment.

“Dr. James McCarthy was an amazing man, a loyal friend, world-class oceanographer, a passionate advocate for science and for our climate balance,” wrote former Vice President Al Gore. “Nobody communicated the importance of the climate crisis in the context of the oceans as eloquently and passionately as Jim. His dedication to better understanding our planet through its oceans will continue to enable and empower us as activists, citizens, and leaders fighting to solve this crisis.”

He was also remembered for his impact as an educator.

“Jim was the kindest, sparkliest, most deeply committed person I’ve known at Harvard,” wrote Samuel S. Myers ’87, principal research scientist, Department of Environmental Health, Harvard T.H. Chan School of Public Health, and director of the Planetary Health Alliance. “Whether mentoring me on science and spirituality or on a trout stream, his gentleness of spirit, his glittering enthusiasm, his curiosity, and his love came through. When the world needs it most, a great light has gone out.”

A native of Sweet Home, Oregon, McCarthy received his undergraduate degree in biology from Gonzaga University and his Ph.D. from Scripps Institution of Oceanography. He came to Harvard as an assistant professor in 1974, following postdoctoral and research scientist positions at Johns Hopkins.

McCarthy helped establish the undergraduate degree program in Environmental Sciences and Public Policy, which launched in 1993. He served on the multidisciplinary concentration’s standing committee since its inception, and as its head tutor from 1996 to 2009 and again in 2011–12.

“Jim McCarthy was a wise teacher and great mentor and role model,” recalled Harvard Medical School Assistant Professor Mary Berlik Rice ’99, M.D., M.P.H., who met him while an undergrad concentrating in Environmental Science and Public Policy. “I will always remember Jim for his brilliant intellectual curiosity, his caring interest in my family and career, and his passion for saving our planet. By example, Jim inspired me and many others to be a scientist and a policy advocate.”

“Jim was a shining example of why our community of scholars on the environment at Harvard is so special,” said Daniel P. Schrag, director of the Harvard University Center for the Environment and Sturgis Hooper professor of geology. “He was kind and collegial, thoughtful, and playful. He cared passionately about the environment and also about the people around him.”

McCarthy and his wife Suzanne, who survives him, were also deans of Pforzheimer House from 1996 to 2009.

In addition to his wife, McCarthy leaves his sons James Joseph (Jamie) and Ryan Sean McCarthy.

Plans for a memorial service at Harvard have not been finalized at this time.