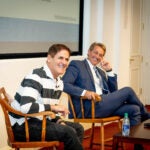 The landscape of the illegal drug trade changes constantly, particularly amid the current opioid crisis. Law-enforcement officers regularly find or confiscate pills, powders, and other substances and need to know their composition as quickly as possible to determine legal charges and sometimes to issue lifesaving warnings.

Carfentanil is a case in point. This cousin to fentanyl has emerged on the nation’s streets in recent years to the alarm of law and public health officials, and with good reason. It is estimated to be 10,000 times stronger than morphine, and even a few crystals can cause a deadly overdose. If officers suspect carfentanil-laced cocaine or heroin is being sold, they rush to verify it so they can spread the word on the street.

The problem, though, is that often government labs are backed up and getting test results can take a considerable amount of time.

Now, researchers in the lab of George Whitesides, the Woodward L. and Ann A. Flowers University Professor, have designed a promising new tool that can identify smaller concentrations of drug powders than almost any other field-testing device. Portable, simple to use, and cost-effective, the technology could provide law-enforcement officers and forensic chemists a quick and accurate way to identify potentially dangerous substances.

In a paper published Tuesday in the journal Angewandte Chemie, postdoctoral scholars Christoffer Abrahamsson and Michael Fink describe how Magneto-Archimedes levitation separates substances based on density. Their thermos-sized MagLev device has two brick-like magnets above and below a retractable, clear container. Inside, a magnetic gasoline-like solution made from something called a gadolinium chelate complex pushes foreign objects — bubbles, sugar, or heroin — into layers of neat, identifiable clouds. “If the liquid wants to be as close as possible to the magnets,” said Fink, “then the other stuff has to get out of the way.”

This upward-and-downward jostling, combined with gravity, forces each substance to float at a height corresponding to its density. “Try to shake a glass of honey and then watch the air bubbles rise,” said Fink. “Sometimes they just stay put.” To isolate fentanyl, a powder as fine as confectioner’s sugar, they invented a new chelate complex, capable of separating substances with far wider ranges of densities.

“I wouldn’t say it’s an improvement because we didn’t have anything to begin with,” said Joseph Bozenko, a senior research chemist at the U.S. Drug Enforcement Agency’s Special Testing and Research Laboratory. “This is novel in the fact that it is an entirely different tool to work with.” Current quick-test options like immunoassays (used in some pregnancy tests) and colorimetric tests that turn green, blue, or yellow in response to certain chemicals, are relatively fast and uncomplicated, but if they pick up more than one substance, the colors blend, becoming a murky and inconclusive brown.

Abrahamsson and Bozenko became acquainted at the urging of local forensic chemists familiar with both of their work. In October of 2018, Bozenko hosted Abrahamsson at the DEA for three days. Together, the two chemists fed MagLev its first illegal powders. “We started out with fentanyl. That was our main target because it is one of the biggest problems right now, and it just worked directly, levitated directly,” Abrahamsson said. “It was almost too good to be true.”

So far, MagLev has demonstrated separation of up to seven different substances at a time, the highest number the team tested. They are, however, confident their tool can handle far more. For forensic chemists and law enforcement, that ability is precious: Street drugs are often mixtures of multiple drugs — heroin, fentanyl, cocaine, methamphetamines — combined with cutting agents such as caffeine, sugar, baking soda, powdered milk, lidocaine, sometimes even rat poison.

Ingredient isolation is especially valuable when a new drug pops up. Carfentanil, for example, is just fentanyl with a few chemical adjustments. A few more adjustments and a new — potentially even more dangerous — version could appear on the street. In 2018, the DEA discovered 22 previously unidentified substances; six of those were new types of fentanyl.

Bozenko said when new drugs come into a forensic chemistry laboratory, backlogs mount. Even with the best chemical analysis tools, isolating an unidentified powder in a compound can take a day or more. MagLev separates most compounds in just five to 25 minutes. Forensic chemists can then extract each purified cloud with a syringe and use technology as large and expensive as some cars —like nuclear magnetic resonance spectrometers or high-resolution mass spectrometry — to confirm the identity of each.

“The biggest reward for the research would be to see it used to save lives.”
— Christoffer Abrahamsson, researcher

Most local labs can’t afford these machines, so the MagLev, which Abrahamsson said could cost just $30 to $200 depending on the size of the magnets, could be a valuable addition to an analytical arsenal. New versions of fentanyl, for example, would hover in the same general area, betraying a shared chemical foundation. Even without more extensive analysis, labs can take important precautions when handling a potential fentanyl analog.

“[MagLev] could enable us to identify novel drugs in a faster time period, which does serve the public,” Bozenko said.

Abrahamsson and Bozenko have plans to improve the technology. With a few tweaks, an officer could operate a smaller version in the field, mixing a powder into the solution, placing the clear container between the magnets, and waiting for the separation to occur. Eventually, Bozenko hopes to pair MagLev with a spectrophotometric — or laser-based — tool to confirm the presumptive result on scene. But first, Abrahamsson said he and the DEA need to collect more data to get MagLev certified for forensic analysis.

“We are looking for funding and partners to support our research,” Abrahamsson said. “We intend to eventually make MagLev an off-the-shelf product available to law-enforcement officers.”

He added: “The biggest reward for the research would be to see it used to save lives.”

This work was supported in part by the U.S. Department of Energy, Office of Basic Energy Sciences, Division of Materials Sciences and Engineering, the Defense Advanced Research Projects Agency (DARPA), and the Simons Foundation. 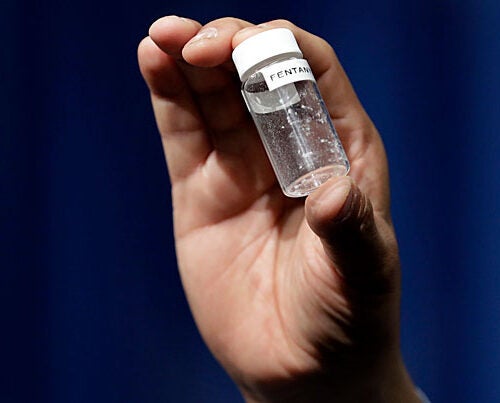