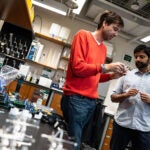 If, soon, you can receive a better flu vaccine, you can thank some very fit yeast — and the eight scientists who have observed them. In a new paper in Nature, a Harvard-led team of researchers has pioneered a study that advances the field of organismic and evolutionary biology, but promises real-world results.

The example of the flu vaccine illustrates the problem. With influenza, Michael Desai, professor of Organismic and Evolutionary Biology (OEB) and of physics, explained, “You need to predict what strains will be present next year or the vaccine will not be any good.

“We have the sequence of all these flu strains, and we’re watching their evolution. What you should be able to do is look at how they’ve evolved in the past and be able to predict into the future what is going to win and what is going to lose. The problem is, we don’t know how to do that prediction,” he said.

The questions, said Desai, in whose lab the study was conducted, were basic. “There is this swarm of mutations that are constantly happening,” he said. “How do they battle it out, and what determines who wins?”

We have been taught that evolution “is slow” and involves the “survival of the fittest,” explained Alex N. Nguyen Ba, a postdoctoral fellow in Desai’s lab and one of three co-lead authors of the new study, along with Ivana Cvijović and José I. Rojas Echenique. “It turns out that molecular evolution doesn’t work that way,” said Nguyen Ba. “It’s actually much faster than how we’ve been taught. This makes evolution way more complex than what has been anticipated.”

Such evolution has been posited mathematically over the last two decades. However, said Desai, previous lab experiments have not been able to prove or disprove the theory, as they have only been able to examine the process with high resolution over a short period of time or with low resolution over a long period of time. Collectively, noted Desai, the paper’s authors — who include Katherine R. Lawrence of MIT, Artur Rego-Costa of Harvard, Xianan Liu of Stanford, and Sasha F. Levy of SLAC National Accelerator Laboratory — have done both kinds of studies.

This new study, however, does both.  “We can identify every single relevant beneficial mutation,” said Nguyen Ba, citing new technology that allowed the research team to follow specific genomes (or lineages) for approximately 1,000 generations.

Cvijović said the research could have gone on indefinitely. “A thousand generations is about three months of growth in our conditions,” said Cvijović, who was a graduate student in Desai’s lab and is now a researcher at Princeton. “That’s enough time to see big changes happening.”

The in-depth, long-term research was possible because of a technological advance in methodology that allowed what Nguyen Ba called the “re-barcoding” of DNA. Using an enzyme to place a marker, the so-called “barcode,” at a specific DNA site, the researchers were able to follow the DNA of yeast through multiple generations. By re-tagging and re-barcoding subsequent generations to record their lineage, the team could then observe how this DNA was transmitted, noting what survived, and what thrived — or came to dominate — as generations passed.

What they discovered included a few surprises. According to the existing theory, the “fittest” DNA would be that which showed up most frequently in subsequent generations. However, Desai said observation showed “fluctuations” for which the theories could not account.

“Mutations and genotypes that seem to have fallen behind can leapfrog and dominate,” said Cvijović.

What that means, she said, will be the subject of future research. However, it implies that evolution is even more complex than previously thought. “Our experiment suggests there may be a wide range of a large number of strongly beneficial mutations,” she said. “And their benefits are both very strong and very different from one another.”