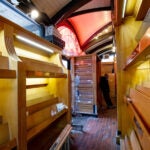 Out of Town out of time

What do a dodgeball tournament, a food tour of Boston’s Chinatown, a screening of “Captain America,” and meeting a professional hypnotist have in common? They’re just a few of the things that the newly revamped College Events Board (CEB) has made available to students so far this year.

With its mission “to bring diverse groups of students together and create a campus atmosphere that addresses student needs outside of the classroom,” in recent years the CEB has rapidly expanded the scope and scale of its role on campus. A co-curricular board, the CEB is comprised of 23 students, with support from staff in the Harvard College Dean of Students Office.

The CEB has been around for several years, but it wasn’t until 2017 that it began its expansion, when Tomika Smith was hired as a full-time adviser to the group. Before she began her tenure, CEB had been offering eight to 10 events per year. Today, that number has jumped to more than 30. Smith offers support and counsel, but is quick to point out that it is the students who are responsible for the terrific programming.

“They understand what students, like them, want to see and experience,” Smith said. “I really look to CEB to take the lead, dream, and imagine, while I play a supporting role on their sideline, with the goal of cheering them on and helping them to achieve the goal.”

Among the largest events the CEB puts on are the annual Yardfest celebration, which draws thousands of students to the Yard for a concert in April; Crimson Jam, a large-scale block party featuring numerous performances and games; and Harvard/Yale Spirit Week, a variety of events related to The Game.

While many of the events CEB puts on center around fun and festivity, the group has helped convene discussions of serious topics as well. Last year, they hosted a discussion titled “We’re Still Here: A Discussion of Indigenous Invisibility” as part of Native American Heritage Month. Just last month, they hosted “Pride Inside Out,” a celebration of BGLTQ+ identity that brought together student performers, a seminar on LGBT history, and a keynote address from Olympian and icon Adam Rippon.

One of the overarching goals of the CEB is to provide inclusive spaces where students from different backgrounds can come together. When it comes to the number of students they attract at their events, Smith said their goal is simple: everyone.

“We do intentional programming at least five times per month, with the hope that each student will and can be reached.”

Natalia Bermudez ’21 joined the CEB during her first year as a member of the Crimson Traditions committee, and later served as director of the City View committee. This year, she is serving as co-president along with fellow student Jessica Herrera ’21. Bermudez considers CEB an invaluable part of her Harvard experience.

“I can say without a doubt that, aside from classes and friends, CEB has been the most important part of my time at Harvard,” she said. “Most of what I’ve learned about Harvard, in terms of resources, academics, administration, and faculty, has been through CEB, whether that was talking to our upperclassmen or meeting administrators and campus partners.

“CEB has taught me how to work under pressure, how to work in a team and lead one, how to time-manage, and to foresee a problem and find a solution.”

Kate Colleran, assistant dean for Student Engagement and Leadership, noted the important role CEB plays in creating programming that brings together students from each of the Houses and first-year dorms.

“CEB really filled a niche for having all-campus programming,” she said. “While House programming is important, CEB is the only group doing events to bring the larger Harvard College community together.”

“Some of my best memories of CEB have been seeing students come to an event by themselves, and leave with a group of people they hadn’t met before,” she said.

She takes particular pride in the expanded recognition that CEB has earned across campus as the board’s programming has continued to expand.

“We used to be known as ‘the people who plan Yardfest,’” she said. “And now CEB is becoming a household name.”