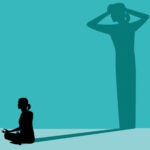 One year after the Blavatnik Family Foundation announced a $200 million commitment to Harvard Medical School (HMS) — the largest gift in the School’s history — philanthropist Len Blavatnik returned to the HMS Quad on Oct. 16 to spend the day visiting with Quad scientists to learn more about research taking place on campus.

“We had several very interesting meetings today. I felt like I was attending master classes all day. It was very intellectually stimulating,” Blavatnik said during an informal conversation with Harvard Corporation member David Rubenstein at an early evening gathering for the Harvard and HMS communities.

“I already saw progress stemming from the gift,” Blavatnik told Rubenstein. Rubenstein is co-founder and co-executive chair of The Carlyle Group and a leader in the area of patriotic philanthropy.

One of the stops Blavatnik made while on the Quad was the School’s Cryo-Electron Microscopy Center for Structural Biology, where scientists are visualizing molecules at the atomic level — work that is contributing to a deeper understanding of molecular mechanisms in both normal and disease states. He also met with HMS scientists working on single-cell sequencing and the use of computational biology and biomedical informatics to predict disease and devise interventions. “I find an enormous satisfaction in supporting science and education … to see people striving for excellence. It gives me a lot of emotional satisfaction,” Blavatnik said.

Blavatnik’s support for HMS is intended to help accelerate the pace of therapeutic discovery and propel the School’s mission of transforming medicine through curiosity-driven research that stimulates the development of new therapies and tools to diagnose, prevent, and treat disease.

During their conversation, Blavatnik, a Harvard Business School (HBS) alumnus and the founder and chairman of Access Industries, an industrial group with global investments in natural resources and chemicals, media and telecommunications, venture capital, real estate, and biotechnology, told Rubenstein that his commitment to the Medical School was encouraged by HBS Dean Nitin Nohria. Blavatnik said support for HMS meshes nicely with his own desire to support initiatives that may lead to significant scientific breakthroughs and that HMS is ripe with the potential to do this.

In welcoming remarks, HMS Dean George Q. Daley described Greater Boston as one of the world’s most dynamic ecosystems for biomedical innovation, home to a number of world-class hospitals and research institutions, more than 500 biotech firms, and 17 of the world’s top 20 pharmaceutical companies.

“Harvard Medical School is the epicenter of this incredible ecosystem,” Daley said.

Blavatnik and his foundation support a number of educational, cultural, and charitable institutions around the world, including the Blavatnik School of Government at Oxford, Tel Aviv University, Carnegie Hall, and Tate. The foundation also funds the Blavatnik Awards for Young Scientists, which honor the achievements of exceptional young scientists and engineers in the U.S., U.K., and Israel.

At Harvard, the foundation also supports the Blavatnik Biomedical Accelerator to identify promising early stage technologies, paving the way toward licensing and commercial development, and the Blavatnik Fellowship in Life Science Entrepreneurship, which offers HBS alumni the opportunity to create new ventures around promising life-science technologies while developing their leadership skills.

Blavatnik said his father was a chemistry professor and head of his department at the same university where his mother, trained as an electrical engineer, was an associate professor. Because he grew up in a family of scientists, Blavatnik said, he derives particular satisfaction from supporting the work of promising researchers.

“I would like at least one of them to be a Nobel Prize winner. It hasn’t happened yet, but a couple have come close,” he said.

In his rare, hour-long interview at HMS, Blavatnik said his family was originally from Odessa, in Ukraine. They were part of a Jewish immigration to the U.S. in 1978.

His first job in the U.S., he recalled, was as a computer programmer in the biostatistics department at what was then the Mount Sinai School of Medicine in New York. He earned enough money there to begin studying computer science at Columbia University part-time, he said, and then eventually full-time, graduating in 1981. He then worked at the Arthur Andersen accounting firm and at Macy’s before deciding to go to graduate school to earn his M.B.A.

“I was pretty naïve, so I applied only to Harvard Business School,” he said.

At HBS, Blavatnik said, he learned how to make and invest money, eventually parlaying his own investments into a global business enterprise. His net worth is now estimated at more than $17 billion.In addition to the satisfaction he derives from his business accomplishments, Blavatnik said he is very proud of his philanthropic work and grateful for his ability to be able “to give back in many different ways, in many countries, as well as being able to change the world.” A dual citizen of both the U.S. and the U.K., he was knighted by Queen Elizabeth II in 2017 for services to philanthropy.

Because of his interest in changing the world, Blavatnik said his support for HMS is particularly gratifying.

“I think, over many years … the speed of discovery, the process of translation from basic research to medical applications, will move faster, and many people will be cured,” he said.