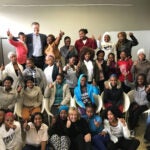 A shot in the arm for vaccine research

Though the recipe for soap — insert an oxygen atom into a carbon-hydrogen bond — sounds simple, carbon-hydrogen bonds are as hard to pull apart as gum stuck in hair. But since they provide the foundation for far more than just soap, finding a way to break that stubborn pair could revolutionize how chemical industries produce everything from pharmaceuticals to household goods.

Now, researchers at Harvard and Cornell have done just that. They have discovered exactly how a reactive copper-nitrene catalyst — which, like the peanut butter used to loosen gum’s grip on hair, nudges a chemical reaction to occur — could transform one of those strong carbon-hydrogen bonds into a carbon-nitrogen bond, a valuable building block for chemical synthesis.

In a paper published in Science, Kurtis Carsch, a Ph.D. student in the Department of Chemistry at the Graduate School of Arts and Sciences, Ted Betley, the Erving Professor of Chemistry, Kyle Lancaster, an associate professor of chemistry at Cornell, and their team of collaborators describe not only how a reactive copper-nitrene catalyst performs its magic, but also how to bottle the tool to make products like solvents, detergents, and dyes with less waste, energy, and cost.

Industries often forge the foundation of such products (amines) through a multistep process. First, raw alkane materials are converted to reactive molecules, often with high-cost, sometimes noxious catalysts. Then, the transformed substrate exchanges a chemical group, which often requires a whole new catalytic system. Avoiding that step and instead instantly inserting the desired function directly into the starting material could reduce the overall materials and potentially even the toxicity of the process.

That’s what Betley and his team aimed to do: Find a catalyst that could skip chemical steps. Even though researchers have hunted for the exact make-up of a reactive copper-nitrene catalyst for more than a half century, the precise formation of the pair’s electrons remained unknown. “Electrons are like real estate. Location is everything,” Betley said.

“The disposition of electrons in a molecule is intimately tied to its reactivity,” said Lancaster, who, along with Ida DiMucci, a graduate student in his lab, helped establish the inventories of electrons on the copper and the nitrogen. Using X-ray spectroscopy to find energies where photons would be absorbed — the mark of an electron’s absence — they found two distinct holes on the nitrogen.

“This flavor of nitrogen — in which you have these two electrons missing — has been implicated in reactivity for decades, but nobody has provided direct experimental evidence for such a species,” he added.

They have now. Typically, if a copper atom binds to a nitrogen, both give up some of their electrons to form a covalent bond, in which they share the electrons equitably. “In this case,” Betley said, “it’s the nitrogen with two holes on it, so it has two free radicals and it’s just bound by a lone pair into the copper.”

That binding prevents the volatile nitrene from whizzing off and performing destructive chemistry with whatever gets in its way. When someone gets a cut on their leg, for example, the body sends out a reactive oxygen species, similar to these nitrene radicals. But while the reactive oxygen species attack invading parasites or infectious agents, but they can damage DNA, too.

So, to contain the reactive nitrene, first-author Carsch built a massive cage in the form of a ligand. The ligand — like organic shrubbery surrounding the copper-nitrene pair — kept the catalyst intact. When he cut back that shrubbery and introduced another substance, — like a carbon-hydrogen bond — the fiery nitrene set to work.

Betley calls the catalyst a skeleton key with the potential to unlock bonds that would otherwise be too strong to use in synthesis. “Hopefully, we can generate these chemical species that are now going to be so reactive that they render the most inert kind of substances we have around us as something we can play with,” he said. “That would be really, really powerful.”

When Carsch first made the molecule, “he was literally bounding with joy,” Betley said. And his results only got more interesting: The nitrene reacted better than expected, even though “the molecule has no right to be stable,” and the bonding structure looked different than any of the designs proposed during the last six decades of research. “Had we proposed it at the outset, I think people would have scoffed at us.”

Though Betley has chased this elusive species — what Lancaster calls “big-game hunting” — ever since he launched his lab in 2007, he takes more pride in his collaborators than the winning science. “I get all my enjoyment from seeing Kurtis and my other students get super fired up about what they’ve actually been able to make,” he said. Carsch faced both critics and chemical walls but persisted nonetheless. “I’m glad he’s stubborn, as stubborn as I am,” Betley said. They both might be as stubborn as the bonds they can now break.

Next, the team could draw inspiration from this new design to build catalysts with even broader-reaching applications, like mirroring nature’s way of converting dangerous methane into methanol. “A real Holy Grail would be to say, ‘OK, that C-H bond there, that particular one in this molecule, I want to turn that into a C-N bond or a C-O bond,’” Lancaster said. That may be a distant goal, but his so-called “dream team” could be the right one to hunt down the solution.