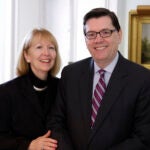 A pair of Harvard scientists have been selected to receive funding for research projects through the Department of Energy Early Career Research Program.

Associate Professor of Physics Cora Dvorkin and Associate Professor of Computer Science Stratos Idreos will each receive at least $150,000 a year for the next five years as part of the program, which is aimed at supporting early career scientists whose research falls into one of the six major programs of the Department’s Office of Science: advanced scientific computing research, basic energy sciences, biological and environmental research, fusion energy sciences, high-energy physics, and nuclear physics.

Dvorkin and Idreos are among 73 scientists from academic institutions and national laboratories nationwide who will be funded through the program.

“Supporting our nation’s most talented and creative researchers in their early career years is crucial to building America’s scientific workforce and sustaining America’s culture of innovation,” Energy Secretary Rick Perry said in announcing the awards. “We congratulate these young researchers on their significant accomplishments to date and look forward to their achievements in the years ahead.”

“I am thrilled to receive this award, and I am excited about the work ahead,” said Dvorkin

That work, she explained, will focus on providing new ways to understand the nature of dark matter and the initial conditions of the universe from present and upcoming cosmological surveys.

Currently, cosmological observations and galaxy dynamics seem to imply that the vast majority of all matter in the universe is composed of dark matter, which is not accounted for by the standard model of particles.

While cold-dark-matter theories have been extremely successful at describing observations on a large-cosmological scale, there are many different dark-matter candidates that have the same observable effects as cold dark matter on large-length scales.

One possible way to distinguish between those different models, Dvorkin said, is to look on much smaller-length scales, where usually dark-matter models become distinguishable.

“My research will develop the theoretical framework and statistical tools needed to map the detailed distribution of dark matter on sub-galactic scales using strong gravitational lensing,” she said. “A second goal of this research will be to build new statistical techniques that efficiently exploit the full power of cosmic-structure data from next-generation surveys.

“I am grateful to the Department of Energy for this support,” she added.

Idreos said he was “honored and excited to receive the DOE Early Career Award.”

“The award gives our lab the flexibility to explore the massive design space of data structures, one of the core areas of computer science,” he noted.

“A data structure explains how data is physically stored,” he said. “When designing algorithms for applications in business and the sciences, researchers often begin by defining a data structure that ideally minimizes computation and data movement.”

Unfortunately, however, there is no universally perfect data structure, meaning that as new data, applications, and hardware emerge, new structures must be designed from the ground up, a process that can be extremely expensive and time-consuming.

“We set out to discover the first principles of data structure design and develop learning algorithms to search through the astronomically large design space they form,” Idreos said. “Effectively, the principles and their structure form a ‘grammar’ that describes all existing data structures and their expected behavior in a principled way, as well as a massive number of designs that have not been invented yet.

“The critical benefit is the ability to reason about how to best store and access data,” he continued. “In turn, this makes it more accessible, and even automatic in some cases, to design tailored algorithms for any data-intensive problem. Data is quickly becoming a critical resource across scientific and business efforts, and our end goal is to take a step toward accelerating and democratizing the utilization of big data technology.”