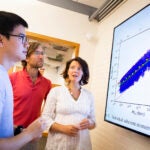 Predicting the strength of earthquakes

If a tree could talk, what might it say?

Would it plead for rain in a drought? Fawn over a neighbor’s foliage? Crack jokes about how fast another tree loses its leaves in fall?

It seems unlikely anyone will ever come across a loquacious linden. But for the arbor-curious, a red oak at the Harvard Forest in Petersham has been tweeting as @awitnesstree since July 17. Outfitted with sensors and cameras, and programmed with code that allows it to string together posts with prewritten bits of text, the Harvard Forest Witness Tree has been sharing on-the-ground insights into its own environmental life and that of its forest.

Already renowned in certain circles as the subject of the popular climate-change book “Witness Tree” by Lynda Mapes, the century-old oak’s social-media debut was the brainchild of Harvard Forest postdoctoral fellow Tim Rademacher and is now a team effort with Clarisse Hart, who heads outreach and education for the forest. Its online presence is modeled after similar “twittering” trees that chronicle their life experiences as part of a tree-water and carbon-monitoring network based in Europe called TreeWatch.net.

“We’ve done the work as a team to equip the tree with a voice, which we decided made the most sense in the first person, and even with a personality, in order to make it relatable to a larger audience,” said Rademacher. “But most importantly, our Witness Tree is an objectively data-driven account, which I expect will amplify messages of climate change. But we don’t decide what gets posted, the tree does.”

In 2018, with support from the National Science Foundation, Rademacher installed equipment on and around the tree to help better understand the tree’s physiology and its place within the environment of the Harvard Forest, and the world beyond.

Dendrometers measure the tree’s growth in real time, evaluating daily changes in the radius of its trunk and providing insights into its health, how it stores carbon, and how it helps remove carbon dioxide from the air. Sensors measure sap and water flow within the xylem, the tree’s transport system to move water and nutrients. This information will help the Harvard Forest team understand how climate, particularly extreme events such as heatwaves and drought, affects water use and nutrient transport within a tree.

Digital cameras called PhenoCams take time-lapse photos every 30 minutes to provide a picture of the environment around the Witness Tree as the seasons pass and the canopy turns from green to yellow to red and orange. The color changes provide clues about the absorption of carbon by photosynthesis and the ways forests are changing with the climate. Harvard Forest collaborators from the University of Massachusetts, Boston, periodically scan the tree (and its neighbors) with a Light Detection and Ranging (LIDAR) Point Cloud device, consisting of a laser, a scanner, and a GPS receiver, which creates 3D diagrams to quantify the volume and condition of leaves and wood.

“I was struck by the amount of technology that goes into researching one red oak, and trees in general,” says Shawna Greyeyes, a summer intern in the 2019 Harvard Forest Research Program in Ecology who developed the Witness Tree website and is @awitnesstree’s ghostwriter. “There’s a great opportunity here to introduce people to this important science, in language they can hopefully understand, and also connect with.”

Perhaps most impressive, especially for a centenarian, is that the tree is also blessed with a reference of more than 50 years of existing data culled from resources such as the Harvard Forest’s Fisher Meteorological Station.

“This is one of the things that sets it apart from existing twittering trees in Europe,” said Hart, “as our tree’s social media messages can also draw on the decades of data in Harvard Forest’s incredible data archive. Meaning, a sensor on a tree anywhere in the world could tell you that a summer temperature is hot, but our tree has the ability to report that it’s the hottest temperature it has seen in 50 years. Our tree is not just witnessing in real time; it’s got a memory.”

Case in point: On July 21, when most of Massachusetts was engulfed in blazing heat, the Witness Tree provided some perspective.

Hours later, the tree voiced what many sweltering residents across the commonwealth were probably also wondering:

The last 2 days were extremely hot for July. When is this heatwave going to end?

Trees are among the world’s most dominant life forms — there are about 600 adult canopy trees per each adult human being worldwide — so studying them will certainly bolster efforts to combat climate change, says Rademacher. Yet remarkably, even though they dominate our planet and are easily accessible to researchers, we still know comparatively very little about how they work.

Rademacher’s own research, for example, focuses on how environmental changes affect wood growth. He studies trees at Harvard Forest and brings the samples back to the Richardson Lab at Northern Arizona University, where they analyze leaves, wood, and roots to trace the amount and movement of carbon within the tree and its effects on wood growth. And although rough estimates of carbon absorption on land do exist, global vegetation models estimating land carbon levels over time are imprecise, because scientists simply don’t know how much trees will grow under changing environmental conditions.

Still, while the science on what role trees may play in climate change is not yet exact, it is clear that “every tree that is planted is better than a tree that is not planted,” said Rademacher.

For this reason, the Harvard Forest team hopes to create a tool kit, complete with sensors, to share with faculty, K-12 educators, environmental organizations, and individuals to continue to inspire inquiry, and education, on trees and the role they can play in preserving Earth for generations to come. Rademacher envisions mini weather stations gathering data on trees in individual backyards across the world. “I dream of an internet of trees,” he said.

To begin with, the team is hopeful that the Witness Tree will amass a sizable, engaged following on Twitter. Followers are encouraged to interact with the tree and to ask probing questions. So here’s one: Once and for all, if a tree falls in a forest and no one (read: human) is around to hear it, does it make a sound or not?

If I fell in the woods, YES, it would make a sound! (There are thousands of organisms around me that would sense the noisy vibration.) But as an oak tree in its prime, I’m not planning to fall any time soon!