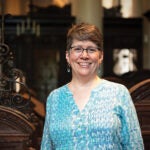 Arriving as a student in 1957, he stayed for more than six decades

McArthur’s energy and leadership kept HBS at the forefront of business education and laid a foundation of intellectual growth and development on which the School continues to build today. His contributions extended far beyond HBS, enhancing the Greater Boston region as well as organizations and institutions around the globe, including in his home country of Canada.

McArthur’s association with HBS began in 1957 when he arrived on campus from Vancouver. His standout performance in the M.B.A. program led to a scholarship in the School’s doctoral program, launching his remarkable career as a scholar, teacher, and administrator and culminating with his appointment as the School’s seventh dean.

McArthur’s vision, passion, and unparalleled gift for building consensus transformed the School. “John felt strongly the responsibility he carried as leader of HBS,” said Nitin Nohria, dean of Harvard Business School. “He cared deeply about every member of the HBS community and believed in the School’s ability to transform lives. By encouraging us all to dream big dreams — in effect, spurring our intellectual ambition — he set the School on a remarkable trajectory.”

McArthur is credited with building the faculty through the recruitment and promotion of outstanding faculty members, strengthening research, enhancing Executive Education, and launching important initiatives in ethics and social enterprise. He oversaw a major campus master planning and renewal effort and restructured the School’s publishing arm to expand the reach and impact of the School and its thought leadership throughout the world. He launched “Leadership and Learning,” a comprehensive M.B.A. curriculum review.

McArthur’s impact extended far beyond the Harvard Business School. Over the decades, he held numerous corporate directorships, committee memberships, and consulting posts in business, government, education, and health care organizations around the world.

For many years, he served as chair of Boston’s Brigham and Women’s Hospital (BWH), which sparked a lifelong passion for the health-care sector. He was the moving force behind the 1994 merger of BWH and Massachusetts General Hospital. He later served as the founding co-chair of the merged entity, Partners HealthCare System, Inc.

In addition to BWH, McArthur was a director of organizations including Chase Manhattan Corp., Cabot Corp., Rohm and Haas Co., Springs Industries, Inc., Telsat Canada, Bell Canada, and Teradyne Inc. He was a founding board member of the Canada Development Investment Corporation and a member of the Task Force on the Future of the Canadian Financial Services Sector.

McArthur, a resident of Weston, Mass., leaves his wife of 63 years, Natty; daughter Susan Radovsky; daughter Jocelyn Swisher and her husband Dan Swisher; four grandchildren; and brother Kenneth McArthur. A family funeral and burial has been planned. A memorial service will be held at Harvard’s Memorial Church at 2 p.m. on Oct. 30 with a reception to follow at Harvard Business School.

Donations may be made to Brigham and Women’s Hospital, Harvard Business School, or University of British Columbia.

To read the full obituary, visit the HBS website.