Predicting the strength of earthquakes 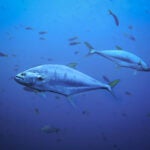 Scientists will be able to predict earthquake magnitudes earlier than ever before thanks to new research by Marine Denolle, assistant professor in the Department of Earth and Planetary Sciences (EPS).

“For large-strike slip earthquakes like those that occur on the San Andreas Fault, which are likely to rupture for about 50 seconds, we would be able to predict the final magnitudes 2 to 5 seconds after getting the first seismic wave,” said Denolle, senior author of the study that appeared recently in Geophysical Research Letters.

Denolle shares authorship with Philippe Danré, the first author and former EPS visiting master’s student; Jiuxun Yin, a Ph.D. candidate in the Graduate School of Arts and Sciences; and Brad Lipovsky, an EPS researcher. The team also proved that the activity of earthquakes is actually organized, not chaotic as scientists had previously believed.

“Our research, which is technically rather simple, provides answers relevant not only to earthquake dynamics, but to prediction of earthquake behavior before the earthquake ends,” said Denolle. While there is still no way to predict quakes before they begin, current detection systems consist of a series of sensors that transmit signals to determine the location and magnitude once rapid shaking occurs.

Denolle and her team used data products and created numerical models to predict an earthquake’s final magnitude 10 to 15 seconds faster than today’s best algorithms — seconds that could provide enough time for people to exit a building or for officials to stop traffic before shaking starts.

The team began by examining patterns of seismic signals — transient waveforms that radiate from the first rupture in a fault, a thin seam of crushed rock separating two blocks of the earth’s crust. An earthquake occurs when the blocks break free. Scientists read these waves using an underground instrument called a seismometer that translates motions into a graph called a seismogram. “Seismograms give us information about what happened on the fault at the place where the earthquake occurred,” said Denolle.

Denolle and her team combined previous seismograms, which recorded changes in the waves over time as they traveled between the seismometer and the fault. This data product, known as “source time function,” provides a more accurate read on the waves from the source over long distances.

Denolle and her team examined a catalog of source time functions from earthquakes around the globe between 1990 and 2017. They discovered that large earthquakes are actually composed of a series of subevents, smaller events whose size is nearly proportional to the size of the main one. The team concluded that they could predict the final size of an earthquake based on the size of the first few subevents.

“The self-organization of earthquake ruptures is well-explained by heterogeneity on the fault, and our current knowledge of earthquake physics can explain our observations,” said Denolle.

The researchers hope their work will continue to evolve and can one day help improve the algorithms for early warnings of earthquake. To do this, they will work on extracting more accurate high-frequency signals from earthquakes to understand more about their dynamics.

“Eventually, we would hope that the study can provide some guidelines for proper modeling of large earthquakes, and serve as a tool for earthquake early warning, especially for regions expecting large earthquakes, like the Pacific Coast and Japan,” said Denolle.