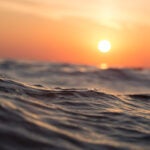 A dolphin is obviously not a golf ball. However, many scientists believed that the way one slips through the water and the other through the air owed to the same cause: similarities in surface texture and their effect on drag and locomotion.

A groundbreaking new study published July 17 in the Royal Society Biology Letters Journal has upended some of that thinking, demonstrating that in regard to dolphins, at least, it is based on faulty assumptions and measurements. “How smooth is a dolphin? The ridged skin of odontocetes,” co-authored by Professor of Biology George V. Lauder, makes use of an innovative new technique to disprove the earlier supposition.

The reasoning behind the older comparison was sound in terms of fluid dynamics. “Golf balls are dimpled,” said Lauder, who published the research with Dylan K. Wainwright, Ph.D. ’19, Frank E. Fish, Sam Ingersol, Terrie M. Williams, Judy St. Leger, and Alexander J. Smits. “That’s because if you have the right surface roughness, you can reduce the drag tremendously and the ball travels much farther.”

This hypothesis grew out of research published in 1936 in which the British zoologist Sir James Gray posited what became known as “Gray’s paradox,” theorizing that only some special quality of a dolphin’s skin could allow it to swim as fast it did. However, Gray had been able to study only rigid models of the marine mammals, and his findings were based, in part, on “a flawed idea about how muscles generate force in swimming,” said Wainwright, a postdoctoral fellow and first author on the new paper.

Earlier studies of dolphin skin appeared to support Gray’s idea, as most samples exhibited ridges, which were considered key to reducing drag. Many of those samples, however, had been removed from the marine mammals, which had caused the skin to wrinkle. Wainwright, Lauder, and their colleagues knew they would have to look closer at how skin actually functions — by studying it on a living animal.

“A lot of the prompting for looking at living animal skin was borne from thinking about what animals actually experience over their surfaces while swimming,” Wainwright said. “Although surfaces and skin are great barriers, their texture and roughness can be easily changed. Think about the surfaces of our fingertips when we are in water too long and get wrinkly — or ‘prune-y,’ as my mom says.” Lauder put it another way: Living skin is “under tension,” that is, stretched taut over muscle and fat, rather than left to shrink in on itself and wrinkle.

“Even small differences in the surface of an animal can impact interactions with the surrounding fluid. This means we really want to capture surface texture in a lifelike state, using as precise and accurate a method as possible,” Wainwright said.

To do so, the team used a new modeling technology, spreading a high-fidelity molding compound over a small patch of skin on a living animal, rather like a liquid Band-Aid or Silly Putty. Then they made a 3D model, via gel-based profilometry, mining data from surface measurements to create miniature topographic maps of those surfaces. An older study had looked at the skin on living dolphins but was not able to make such precise measurements or modeling.

Collaborating with researchers at University of California, Santa Cruz, West Chester University, and SeaWorld, the group was able to model the skin of several bottlenose and white-sided dolphins, killer whales, pilot whales, and belugas, which all had been trained to come ashore briefly for routine veterinary care. The skin of these marine mammals (which were safely returned to the water) was compared with that of other swimmers, such as trout and manta rays. The conclusion was that while some sea mammals had some ridges, at least on parts of their parts of their bodies, most did not.

“For the most part,” said Lauder, “dolphins are very, very smooth.”

Why did it take so long for accurate measurements to be made? Popular beliefs about dolphins may have hindered research. “Dolphins are like magical creatures for people,” said Lauder. “They’re beautiful and friendly, and people want to think that they have special properties that enable them to swim so nicely in the ocean. One of those misconceptions was skin surface texture. But that’s wrong.”

Dolphins and whales, he said, swim as well as they do for perfectly ordinary reasons. “They’re very muscular. They’re very streamlined. They have tendons in the tail that are arranged in a way that gives them a lot of thrust. It just doesn’t have much to do with the skin.

“Nature,” Lauder concluded, “has found multiple solutions to moving rapidly through the water.”