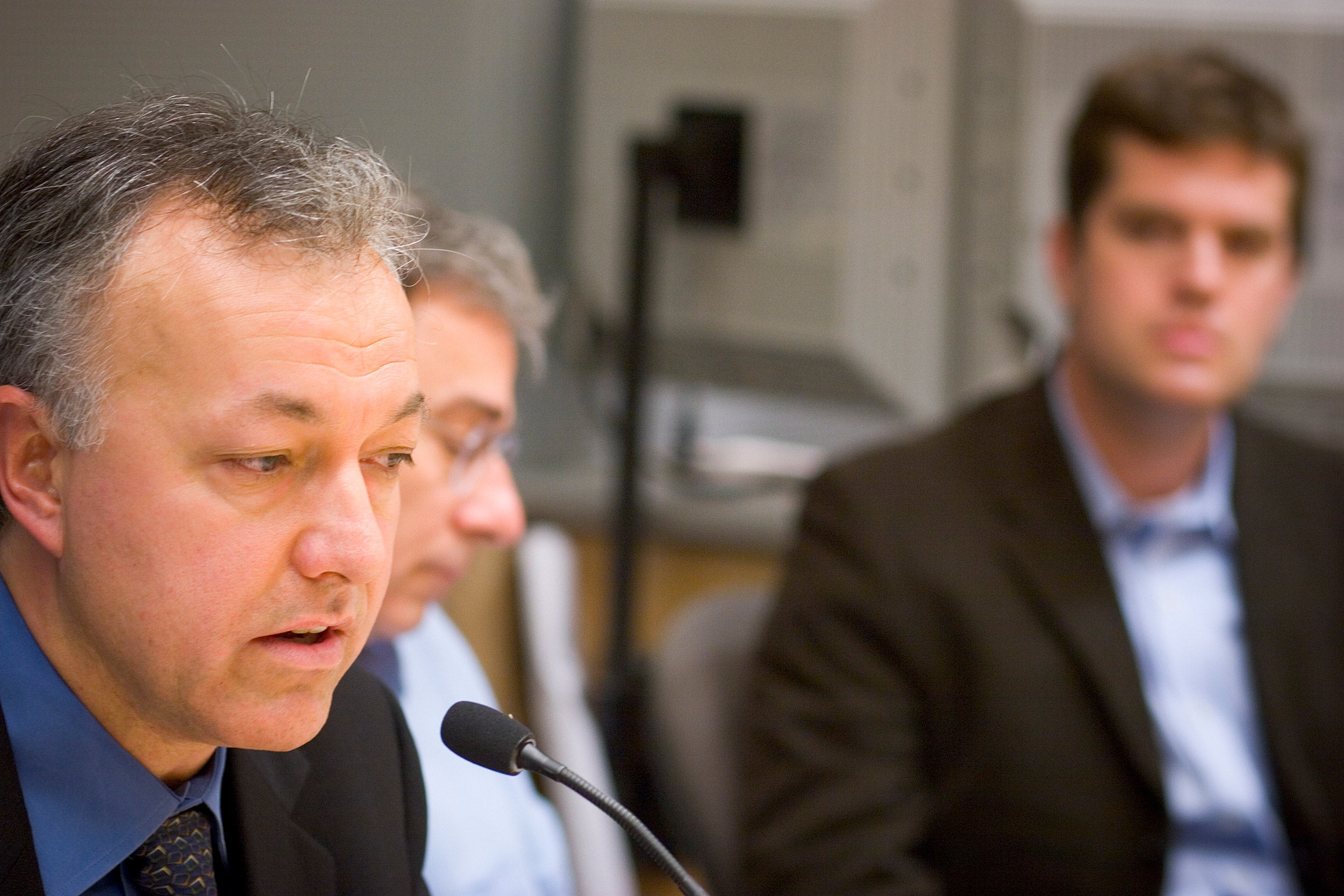 Cyclists and pedestrians are dying in increasing numbers on U.S. roads, according to recent U.S. government estimates, while overall traffic fatalities, despite a slight drop in 2018, remain up 12 percent since 2014.

The figures, from the National Highway Traffic Safety Administration, show a 1 percent drop in overall traffic deaths last year, but a 10 percent increase in traffic-related cyclist deaths and a 4 percent rise in the number of pedestrians killed. The Harvard T.H. Chan School’s Center for Health Communication is planning to tackle a major cause: distracted driving.

The center is joining forces with a Hollywood animation studio and a New York ad firm to develop a campaign aimed at raising awareness of the need for drivers to remain focused, a problem that has proved resistant to efforts by legislatures, federal and state agencies, insurance companies, carmakers, nonprofits, and others.

On the eve of the July 4 holiday period, when an estimated 41 million Americans will be on the road, the Gazette spoke to Jay Winsten, the Frank Stanton Center Director and the School’s associate dean for communication. Winsten and his team spearheaded the U.S. Designated Driver Campaign, which helped sharply reduce drunken driving fatalities. They plan to use the same strategy they devised for that project on this one: create a social norm that stigmatizes the behavior.

GAZETTE: Are things getting better or worse with distracted driving?

In the U.S., nearly 38,000 people lost their lives in traffic crashes last year, up 12 percent since 2014, and 4.5 million people were seriously injured. Distracted driving has been identified as a key factor in the recent rise.

GAZETTE: How does that compare to other kinds of deaths?

WINSTEN: At a global level, road crashes are responsible for over 1.3 million fatalities each year — higher than for HIV/AIDS, malaria, or TB. In the U.S., traffic crashes are the leading cause of death among young adults.

GAZETTE: Are we talking specifically about distractions due to technology or are we talking about all kinds of distractions: kids in the back seat, people juggling a sandwich, a cup of coffee, and driving?

WINSTEN: We’re talking about all sources of distraction, ranging from the use of digital devices to more traditional forms of distracted driving — reaching for a water bottle that you’ve dropped or turning toward a child in the back seat to handle a problem. Distracted driving is a longstanding problem. However, what’s brought it to the forefront of attention is the added dimension of injuries and fatalities resulting from the use of digital devices while driving.

GAZETTE: Massachusetts has a new law pending that would ban the use of handheld devices while driving. Did you have a role in that and what do you think of those restrictions?

WINSTEN: We were involved early on. We organized a briefing at the State House for members of the legislature, and I published an op-ed in The Boston Globe.

Almost every state has enacted a law to ban texting while driving. But those laws have proven extremely difficult to enforce. That’s because, in most states, it’s still legal to enter GPS coordinates on a smart phone, or scroll through music selections, while driving. The prohibition is limited to texting and emailing. So, when drivers are pulled over, they frequently tell the officer, “No sir, I wasn’t texting and driving. I was entering GPS coordinates.” And it requires a warrant to check the driver’s phone.

Nineteen states — and Massachusetts is about to follow suit — prohibit all use of handheld digital devices while driving. The Massachusetts Senate and House have passed different versions of that bill — they will have to be reconciled — and the governor has indicated that he intends to sign it.

Banning the use of handheld devices makes it possible for police to effectively enforce distracted driving laws because, if you are holding the digital device, that’s a per se offense. It’s going to make a significant difference on the enforcement side, though it’s not a panacea.

GAZETTE: What has been previously tried to address the distracted-driving problem?

WINSTEN: Government agencies, corporations, nonprofits, and celebrities like Oprah Winfrey and Ellen DeGeneres have mounted campaigns to curb distracted driving. Digital-device manufacturers have promoted the use of do-not-disturb-while-driving apps on smartphones. Auto manufacturers have developed advanced monitoring and response systems to assist drivers in avoiding crashes. And, insurance carriers and telematics companies have joined forces to create financial incentives for safe driving, monitor driver performance, and to provide feedback to drivers.

The problem is that, notwithstanding these efforts, distracted-driving behavior has remained largely resistant to change. It has emerged as a global problem, drawing the attention of policymakers on every continent. No one has figured out the solution yet.

GAZETTE: Why has this proven so hard to tackle?

WINSTEN: In today’s hyperconnected culture, there’s tremendous psychological resistance to putting down the phone and disengaging from one’s social and business worlds when one steps into the car. Audible notifications of incoming calls, text messages, and emails exert a powerful pull. Very few drivers — about 5 percent — take the step of silencing those notifications while driving, despite the ready availability of “do not disturb” technology for that purpose.

Another part of the challenge is that many drivers have highly inflated beliefs about their own skills at multitasking. And each time they drive while distracted and get away with it, their confidence only grows. Videos featuring dramatic slow-motion recreations of serious crashes caused by distracted drivers garner millions of views, but they don’t change behavior because many viewers think, “That’s not me. I can handle it. That won’t happen to me.”

And lastly, in contrast to drunken driving, the dominant social norm around distracted driving remains largely permissive. There’s no stigma, no sense of shame associated with the behavior. Most people say they disapprove of driving while distracted, but they continue to do so and readily admit it. The rapid proliferation of high-tech distractions in the vehicle — particularly in-car entertainment systems controlled by touch screens — threatens to further exacerbate the problem.

Our own interest is in the next generation of public campaigns. We analyzed the extensive body of opinion research that’s available on this issue and were intrigued by one finding in particular: Large majorities consistently express a palpable fear for their own personal safety due to the actions of “other” drivers, even as they downplay the risks from their own multitasking. They say they’re frightened by the multitude of distracted drivers who drift in and out of their lanes.

So, we want to promote a message that resonates with drivers’ preexisting fear: Vigilantly scan the road to detect and rapidly respond to emerging threats. In other words, be an attentive driver.

GAZETTE: So, this has a twofold effect, heightening awareness that other drivers could be staring at their screens instead of the road, and at the same time making the point that you don’t want to be the person whom other drivers are on the lookout for.

WINSTEN: Yes, that’s correct. The message will be executed in a way that adds a dimension of self-consciousness about one’s own driving. At a granular level, Project LookOut, as we call it, will promote active scanning of the road environment, especially at busy intersections and in other high-risk zones — blind curves, work sites, school crossings, police road stops. The campaign will emphasize that attentive driving involves considerably more than keeping eyes on the road and hands on the wheel. Especially in high-risk zones, it requires vigilant attention — systematically scanning left, right, and in rear- and side-view mirrors — to detect, evaluate, and rapidly respond to threats — a level of attention that cannot be achieved while multitasking.

To help promote a shift in social norms, Project LookOut also will encourage passengers — including children — to speak up when their driver becomes inattentive. The campaign will create an animated mascot to model interpersonal interventions by passengers. And, we will seek to popularize language for passengers to use when speaking up. We’re working with a Hollywood animated film studio and a leading advertising/marketing agency to develop the character and the overall campaign.

GAZETTE: So, active scanning helps you to see not just other drivers who may be erratic because of a distraction, but also bikers and pedestrians?

WINSTEN: Yes. There needs to be a careful balancing of the message: It’s obviously not solely about protecting yourself and your companions; it’s also about not causing harm to other road users whose lives have momentarily intersected with yours.

GAZETTE: Is there a solid research basis for your emphasis on active scanning?

WINSTEN: Yes, the campaign’s emphasis on vigilant scanning is based in part on findings from a research workshop that we convened in collaboration with the U.S. National Highway Traffic Safety Administration (NHTSA) and Toyota. The workshop brought together some 30 researchers to review knowledge gained from aviation research on strategies to counter inattention in the cockpit, and to consider potential applications of that research to the distracted driving problem.

A key behavioral factor in aviation safety is the maintenance of “situational awareness” (SA), which depends on three steps: surveillance of the surrounding environment through active scanning; identifying and rapidly assessing a potential risk; and projecting ahead in time to anticipate how the situation may evolve. The workshop concluded that SA also “offers high potential payoffs for improving road safety and saving lives.”

GAZETTE: Will Project LookOut be solely a media initiative?

WINSTEN: No, we also will assist local community groups in tackling the issue, with a big emphasis on preventing harm to pedestrians and cyclists. The materials we develop will be made available to grassroots organizations for local branding.

GAZETTE: So, this is going to be a resource for groups who are working on this issue and think it’s important already. Are you also going to be involving YouTube and Facebook and the like?

WINSTEN: Yes, we’ll be working through both traditional media channels and social media channels aggressively. The Hollywood creative community will play a significant role in this, as they did with our designated-driver campaign.

GAZETTE: Who’s going to be working on this?

WINSTEN: It’s an initiative of Harvard Chan’s Center for Health Communication. We will be implementing it in stages, reaching out to researchers and others within the School and around the University to collaborate.

GAZETTE: Has a launch date been set?