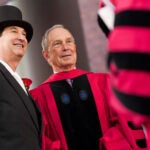 Breyer to step down from Harvard Corporation

The Wyss Institute for Biologically Inspired Engineering at Harvard University announced today the latest gift of $131 million from its founder, entrepreneur and philanthropist Hansjörg Wyss, M.B.A. ’65.

The Wyss Institute seeks to bridge the gap between academia and industry by drawing inspiration from nature’s design principles to solve some of the world’s most complex challenges in health care and the environment and commercializing those solutions to maximize their impact.

“Hansjörg Wyss has helped to expand what we know and what we can accomplish across a wide range of disciplines. The advances that his generosity has enabled will change the future for countless people,” said Harvard University President Larry Bacow. “His third gift to support the work of the Wyss Institute will ensure the continued success of our extraordinarily talented faculty and staff, as well as create new opportunities for collaboration and growth. We are deeply grateful for his support.”

In 2009, Wyss made possible the Institute’s creation with a founding $125 million gift. A second gift to the University in 2013 enabled the Institute to grow and advance its pioneering work. The gift announced today will continue to enable the progress the Institute has made during its initial 10 years, amplify its already significant impact, and sustain its leadership in the field of biologically inspired engineering. Wyss’ giving over many years and across the University amounts to more than $400 million.

“When talented, creative people are given the freedom to work together across disciplines, there are few problems they cannot solve,” said Wyss. “In the last decade, the Wyss Institute has made breakthrough after breakthrough to improve medicine and to apply the latest science to the betterment of peoples’ lives. I am happy to continue my support for the Wyss Institute and Harvard and look forward to seeing what the institute discovers and creates in the years ahead.”

Wyss’ support for the Institute’s unique model — interdisciplinary collaboration among scientists and engineers from disparate fields along with expert staff with industrial experience — has led to sustained productivity in the past decade, including more than 2,600 patent filings, 53 licensing agreements, 29 startups, and numerous industry collaborations. The groundbreaking discoveries, designs, and technologies the institute has produced across a range of areas have a shared potential to improve human health and the environment on a global scale. Included among the breakthroughs Wyss’ gifts have enabled are:

One of cancer’s most insidious tricks is deactivating the body’s immune cells, which normally find and kill malfunctioning cells. A project from the lab of core faculty member David Mooney, Robert B. Pinkas Family Professor of Bioengineering at the Harvard John A. Paulson School of Engineering and Applied Sciences (SEAS), in the Institute’s immuno-materials platform created a small implantable scaffold made of a biodegradable polymer that contains components derived from a patient’s cancer cells to act as “triggers.” When immune cells pass through the scaffold, they become activated and can successfully hunt and kill cancer cells elsewhere in the body. This process also creates a vaccine-like “memory” of the cancer so that any future cancer cells will also be killed. The technology was licensed by Novartis in 2018 and is currently in human clinical trials, where it is showing remarkable promise in treating patients with melanoma.

Any drug that is developed for humans is first tested on animals to determine its safety and efficacy, but because animals are metabolically and genetically different from humans, drugs that work in mice or rats often fail in people. In addition, patients sometimes react differently to different drugs, but it is difficult to predict what those reactions will be before the drug is administered. One of the first startups founded to commercialize a Wyss technology, Emulate, Inc. aims to solve this problem with organs-on-chips: clear, flexible microfluidic chips that can be seeded with live human cells to recapitulate the function of human organs ex vivo. This technology was created in the Institute’s bioinspired therapeutics and diagnostics platform by the lab of Wyss Founding Director Donald Ingber, the Judah Folkman Professor of Vascular Biology at Harvard Medical School and the Vascular Biology Program at Boston Children’s Hospital, and has the potential to eliminate animal testing, greatly accelerate the drug development process, and enable personalized medicine.

Diagnosing a patient with the correct illness is necessary to treat any disease, and recent diagnostic technologies have emerged that can determine sickness or health on a molecular level. However, most molecular diagnostic tools are costly, labor-intensive, and require advanced lab equipment, making them difficult to deploy in low-resource settings. A synthetic-biology-based diagnostic sensor in the Institute’s living cellular devices platform was developed by Wyss core faculty member James Collins, Termeer Professor of Medical Engineering & Science at the Massachusetts Institute of Technology. It can detect molecules of DNA and RNA with extremely high precision and produces an easy-to-read signal. Crucially, this process can be done at room temperature and does not require any scientific instruments, allowing molecular diagnostics to be brought to the front lines of disease outbreaks. The technology was licensed by Sherlock Biosciences in 2019.

Nearly a million Americans suffer strokes annually, and 80 percent of them lose the ability to use one of their legs normally. Even after undergoing physical therapy, many patients never regain a normal walking gait, grow more prone to falls, and become more sedentary. Wearable “exoskeletons” are being developed to provide support during walking and rehabilitation, but these devices are large, hard, and expensive, limiting their use. Working in the Institute’s bioinspired soft robotics platform, Wyss researchers in the lab of Conor Walsh, John L. Loeb Associate Professor of Engineering and Applied Sciences at SEAS, have created a light, soft, fabric-based “exosuit” that applies assistive force to correct patients’ gait during walking and can be worn during normal daily activities. The exosuit was licensed in 2016 by ReWalk Robotics, which is commercializing it for stroke and multiple sclerosis patients. 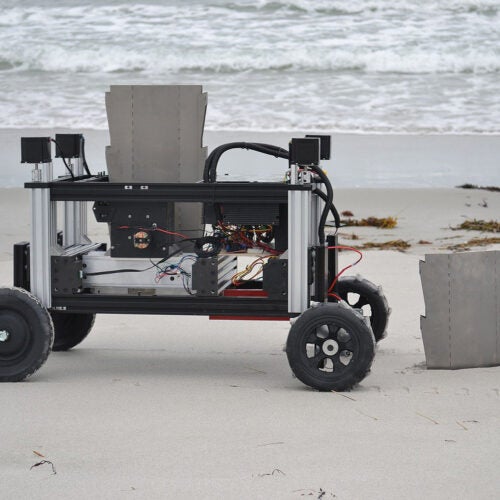 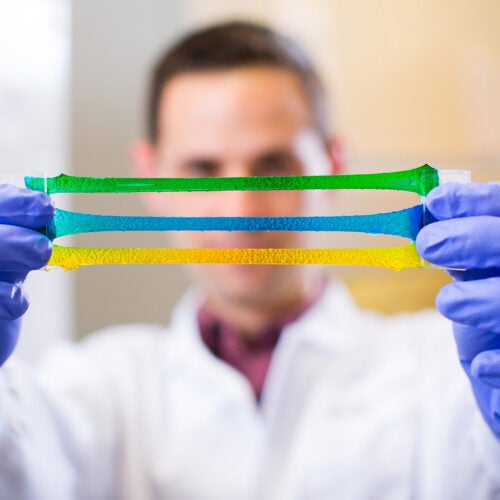 Today, a decade after Wyss founded the Institute, 375 full-time staff collaborate and work in 100,000 square feet of research space shared between Harvard’s Longwood Medical Campus and Cambridge sites. The community of scientists, biologists, physicists, chemists, engineers, and clinicians includes 18 core faculty, 16 associate faculty, and numerous students, postdocs, and fellows, as well as more than 25 scientists and engineers recruited from industry with extensive experience in product development and team management across multiple disciplines and fields. In addition to their technology commercialization efforts, Wyss Institute faculty and staff have published more than 2,000 scientific articles, with an average of one paper in Scienceor Natureper month since 2009.

“From developing singular insights and cutting-edge approaches to creating bioinspired materials and feats of engineering, the Wyss Institute has and will continue to have a powerful impact,” said Harvard University Provost Alan Garber. “Through the many technologies it creates as well as the partnerships it has cultivated, the institute shines a light on the convening power of Harvard and the creative brilliance of its faculty and staff. We are truly grateful for Mr. Wyss’ generosity and for placing his trust in Harvard.”

Garber emphasized the Institute’s alliances with all of the University’s Schools, as well as with other leading academic and clinical institutions in the Boston area and around the world. This collaboration and the bridges it has built between academia and industry have been key to the institute’s ability to accelerate the development of novel diagnostics, therapeutics, and other disruptive technologies.

“The Wyss Institute exists because of Hansjörg Wyss’ vision that crossing disciplinary boundaries and collaborating across both different scientific fields and different research institutions is crucial for bringing about transformative change,” said Ingber, who is also a professor of bioengineering at Harvard’s School of Engineering and Applied Sciences. “We are honored and humbled by Mr. Wyss’ continued generosity, and we will continue to strive to push the envelope in both technology innovation and translation of these technologies into products that can bring about near-term positive change worldwide.”

A native of Switzerland, Wyss is a philanthropist dedicated to helping save the world’s remaining wild places, protecting and empowering society’s most vulnerable, and encouraging breakthroughs in medicine and science. His philanthropy is made possible by his success in starting and growing a medical research and design company, Pennsylvania-based Synthes USA, whose products have helped millions of patients recover from skeletal and soft-tissue trauma and injuries.

Today’s gift is being made through the Wyss Foundation, created in 1998 and known for helping to protect some of the world’s most iconic landscapes — from Montana’s Crown of the Continent to the headwaters of the Amazon River in the Andes Mountains — and ensuring they remain open and accessible to all. Altogether, the Wyss Foundation has invested more than $450 million to help local communities, land trusts, and nonprofit partners conserve more than 40 million acres of land in North America, Africa, Europe, Australia, and South America. Last fall, in a New York Times op-ed, Wyss announced he would donate $1 billion over the next decade to help conserve at least 30 percent of the planet in a natural state by 2030.