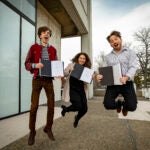 Sara Bobok ’19 has always been of two worlds, at home in both and neither. Born near Budapest, Hungary, she moved to the U.S. at age 2 when her parents — an internist and a mathematician and software engineer — emigrated in search of economic opportunity, eventually settling in a suburb of Schenectady, N.Y. Unlike many immigrants, while growing up Bobok returned to her native land every year. “It was difficult in Hungary to express what it was like to live in America,” she said, “and difficult in America to explain that I’m not entirely American. The language we spoke, the foods we ate, the culture we grew up in, and also my family’s values were Hungarian.”

Though she and her parents and younger brother were active in the expat Hungarian community, they had no extended family nearby. “I had great opportunities here but wish I could have gotten to know my cousins better,” she said.

She found another sort of family on her visits, though. “A big turning point in my life happened when I was 14,” she recalled. It was when she spent 10 days working with her aunt in a foster-home “orphanage” in Galospetreu, Transylvania, a region of Romania with a Hungarian ethnic minority.

“I thought I was going to teach an English program for the kids,” she said, “but I realized on the first day that of all the things they needed in the world, fluency in English wasn’t one of them. My entire worldview shifted in terms of how I’d seen my life and what was important to me. Probably my third day there I completely broke down. I remember asking how the world could be so unfair just because someone was born in a different place.” Since that revelation, Bobok has returned to the orphanage annually, for anywhere from two to six weeks, getting to know the 30 or so 3- to 17-year-olds who live there.

Most of the children she meets are there because of neglect or economic scarcity, and often when they leave the orphanage, they are subject to the same cycles of poverty their parents were. “But they work and love their children and are very respectable,” she said. “They live in poverty but it seems clear there’s always something they took away from the home.” Bobok, too, has taken something away from her time there. “I think I owe a lot of who I am today to the orphanage teaching me such serious lessons so early on.”

Last year, in addition to a brief stint at the orphanage, Bobok spent three months conducting participant observation research with Hungary’s far-right party, Jobbik, including time in the party’s youth summer camp, for her senior thesis. In the course of her extensive research she was surprised to find that a disproportionate number of young people in the party — approximately a quarter of them — identify as social liberals. The reason behind this apparent paradox, Bobok discovered, rests in a redefinition of Hungarian patriotism through a realignment of young people’s political priorities. Her advisers at the Minda de Gunzburg Center for European Studies (CES), which underwrote her research under one of 14 Senior Thesis Grants, were no less than stunned by her scholarship.

“Her hypothesis, which I believe is correct, is the first in-depth study on the mindset, worldview, and motivations of these people,” said Nicolas Prevelakis, the assistant director of curricular development at the Center for Hellenic Studies and Bobok’s thesis supervisor. “I believe it’s the only such study that’s been done in Hungary. Typically students do 25 or maybe 30 interviews; she did 70 or 80, and her findings are not only extremely important for Hungary but also for the fact that she identified a trend that goes way beyond Hungary.”

Grzegorz Ekiert, the Laurence A. Tisch Professor of Government and director of CES, calls Bobok, who’s concentrating in social studies, “one of those very special students Harvard is fortunate to have.” He recalls that in her first course with him, “Capitalism and Democracy in Central and Eastern Europe,” “she was not pleased with my introductory lecture, finding it too opinionated and critical of Hungarian politics. She was not shy to tell me this.” The two continued the conversation well after the semester ended, and Ekiert maintains that he learned nearly as much from her as she did from him.

Bobok is “not happy till she gets at the heart of things,” Prevelakis added, “and she’s willing to do a lot of work for that. That is very unusual, not only among students but among people in general. A lot of people would say, ‘I have the answer, let’s move on.’ But she has a commitment to the truth. She’s winning one award after another, which I think is well deserved.”

Bobok has been asked to speak at four conferences. She won the Kathryn W. Davis Prize for Undergraduate Research and the Hoopes Prize, which recognizes the best senior theses on campus. She recently learned she also received a Pforzheimer Public Service Fellowship, with which she intends to spend nine months in Hungary studying sex trafficking, which she called a “massive crisis” in the country. She plans to decipher “what the trafficking pipeline looks like in Hungary” and then try to identify possible points of intervention, ultimately designing a prevention curriculum that she’ll take to middle schools, high schools, and children’s homes.

It may seem far afield from her work with the political far right and her time at the orphanage, but from Bobok’s perspective they’re all of a piece. “I’m open to anything that will increase my potential of having an impact on these kids I’m working with,” she said, adding that she may eventually get a law degree and work in children’s aid in Hungary. “Ultimately I hope to make it my life’s work to keep using the resources I was so lucky to have been given in my life to somehow help people who were not afforded those same advantages.”