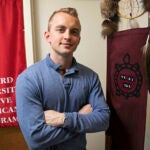 Despite tragic losses, Liz Roux keeps her head up and her goals in view

Liz Roux lives by the codes of optimism and resiliency. They have guided her through childhood tragedies and toward a career in medicine, helped her build new communities, and inspired her to reimagine her idea of home.

Roux was born in China and abandoned as an infant. She was adopted from an orphanage and her family of two — she and her American mother — was tight-knit and adventurous from the start. Growing up in southwest Florida near the Gulf of Mexico, Ten Thousand Islands, and Everglades National Park, they spent their days exploring the region’s natural beauty and feeding Roux’s endless curiosity.

“Whenever we went somewhere, I was always asking, ‘why are we walking? Why don’t we run?’” said Roux. “She definitely wanted me to channel my energy into something directed.”

Roux found that direction in seventh grade, when she started running competitively, eventually becoming captain of her high school cross-country and track teams. Her mother was diagnosed with cancer and passed away when Roux was 16. Her teammates and running club rallied to support her, emotionally and financially, after Roux organized a running fundraiser to pay her mother’s medical bills. Her cross-country coach unofficially adopted her two years later and Roux joined his family of five. Roux’s running community showed up again when her coach’s youngest son, David, passed away from cancer during her sophomore year at Harvard. Roux’s family formed Team David, which runs the annual St. Jude Children’s Research Hospital’s Memphis Marathon and has raised more than $100,000 for the hospital in the past two years.

These terrible losses — and the support she received in their wake — further defined Roux. “Taking care of my mom and brother when they were sick and eventually passed away helped solidify the idea that I wanted to help people,” Roux said.

After her mother’s death, Roux decided to become a doctor and applied to Harvard on a pre-med track. When she got into Harvard and was offered a full financial aid package, Roux, who a few months earlier hadn’t truly considered leaving Florida for college, saw an opportunity for new adventures in academia and beyond.  Once she arrived on campus, she found a new calling in marine biology research. Deciding between the two paths was difficult, but Roux’s love of caregiving was solidified in the wake of her brother’s death. In her junior year, she reaffirmed her career goals in medicine and continued to pursue her fascination with the natural world as a concentrator in integrative biology, finding another home in the close-knit Department of Organismic and Evolutionary Biology (OEB).

“Folks in the OEB Department are down to earth and love nature like I do,” said Roux. “It’s a place where pre-med and zoology people can come together and do research that they are all interested in.”

Andrew Berry, a lecturer and undergraduate adviser for integrative biology concentrators in the department, was impressed by Roux’s dedication to field research. “Field biology is hard, and you have to be independent, think on your feet, and make your own decisions when you can’t ask for help,” said Berry. “Liz is already an accomplished field biologist, which is very impressive.

“Liz is also a consummate community builder,” Berry added, “and as one of the two seniors responsible for the OEB undergraduate group, she has done a wonderful job in helping to foster vertical integration between classes of students from sophomores to seniors.”

In another community building project, Roux worked with other integrative biology concentrators to propose a new undergraduate course that focused on field research and methodology and was first offered to sophomores in January.

“Liz was willing to make this course happen even when it wasn’t going to be available to her as a senior, which was very generous to the other students,” said Professor of Organismic and Evolutionary Biology and Harvard College Professor Gonzalo Giribet, who advised Roux’s senior thesis. “She does things for others and puts in the work for things that will benefit future students.”

Roux’s sense of adventure didn’t waver at Harvard, despite her intensive pre-med curriculum and the culture shock of New England and its winters. But as she had with running, Roux directed herself toward opportunities: a study abroad summer program in Tanzania after her first year; a spring break trip to Panama to do field research with Giribet’s “Biology and Evolution of Invertebrate Animals” course; and last summer, a return to the shores of Florida for her senior thesis research.

Roux’s thesis, “Phylogeographic differentiation of B. candida, ectocommensal flatworm of the Atlantic horseshoe crab,” was her contribution to understanding how the worm’s environment and location shape its symbiotic relationship to the crab that is its host. As she talked her way onto fishing boats and conducted solo kayaking trips around the Florida peninsula, she also learned a few things about her own identity and sense of belonging.

“Doing field research in Florida was a way for me to see the state almost in its entirety,” said Roux. “I had an idyllic childhood, but I didn’t have a romanticized idea of home anymore. It was a place with good and bad things like any other. Doing my research there taught me to think more deeply about what makes a community.”

Outside the classroom, Roux also worked diligently to experience life with intention. After a chance dining hall encounter with a participant, she joined Alzheimer’s Buddies, a Phillips Brooks House Association program that pairs College students with residents at long-term care homes in the Cambridge area. As a trip leader in the First-Year Outdoor Program (FOP) and the Outing Club, she helped students develop a love of nature on hikes and climbs around New England. Roux served as the women’s captain of the Harvard College Running Club for three years and led community runs at her on-campus job with Harvard on the Move. In the fall, she gave a TED talk at TEDxYouth@BeaconStreet titled “Run for, not from,” on the role of running in her life. Even jogging along the Charles River, Roux adds to her cohort.

“I see strangers on my runs and we all wave to each other and say hello, like we’re all in it together,” she said. “There are many extraordinary people here, and when I take time to get to know and understand them, I feel more connected.”

Through Harvard and into the future, Roux remains focused on the values and issues close to her heart. She plans to apply to medical school in 2020, and looks forward to new experiences in the interim.

“People at Harvard are really passionate, and it’s very invigorating,” said Roux. “It took some time to narrow down my focus to a few key things that I love and enjoy, and I didn’t want to jump through hoops because I felt like I had to. Now, I’m adventuring with purpose.”