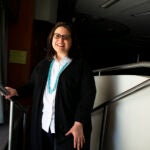 Nima Samimi knew early on that everything’s in a name — except identity. Growing up, the first-generation Iranian immigrant boy often wondered who he would be if his name sounded more American.

It was driving determination cloaked in self-doubt that led him on a path of discovery to understand his cultural history and ultimately to a symbolic stage name, Muhammad Seven.

Now 41, he will walk Commencement with the appreciation of Middle Eastern culture he earned in November with his master’s of liberal arts degree from the Harvard University Extension School in hand, and a name reflecting a deeply felt expression of identity through music.

Samimi was born in Boston to an American mother and Iranian immigrant father, who came to the United States in 1975. On his mother’s side, his grandparents were Catholic and Protestant. His father’s parents were Muslim and Jewish.

His parents separated when he was a year old. While growing up, Samimi and his mother moved frequently throughout predominantly white towns in Greater Boston while she worked hard to break away from public assistance. His father had relocated to Buffalo, N.Y., leaving Samimi without the presence of Iranian community in his life.

“Buffalo has a blue-collar community of Iranians, but I was raised by my mother apart from that,” he said. “I also have a very mixed religious heritage. I show up in the world as an Iranian-American Muslim, but almost all of my father’s family stayed in Iran, so I didn’t have that strong cultural connection.”

His mother had a strong sense of justice, Samimi said, and she taught him the value of hard work, determination, and the search for meaning. When he was 14, he and his mother worked for 10 weeks in an orphanage in Nicoresti, Romania, shortly after the fall of the Communist regime of Nicolae Ceausescu.

Two years later, he spent his junior year as an exchange student in Alsace, France, where he became fluent in French. At 17, after graduating from Weston High School, he moved to London and attended Steiner Waldorf teacher training, but soon developed a passion for the culinary arts working in area restaurants. Since then, Samimi has held more than 40 different jobs, including baker, waiter, carpenter, landscaper, farmer, and even assistant building manager at the University of Massachusetts Boston’s Student Center, where he attended the university’s honors program, and graduated in 2007 with a bachelor’s degree in history.

“I was raised in unusual circumstances, and I’ve done a lot of odd things. It really was a story of self-discovery,” Samimi said.

While growing up, Samimi regularly visited his father in Buffalo and cultivated a deep knowledge of his Iranian history. But that never changed his shy, self-conscious nature born of a complex identity. Making friends was a struggle, partly, he thinks, because of his name, Nima. Plus, he looked decidedly different from most of his American peers.

“From a young age I was very self-consciously Iranian,” Samimi said. “For most immigrants there is major motivation to assimilate, and as a boy I was so bad at assimilating that I quickly gave myself over to the alternative, which was really try to understand what it meant to be both Iranian and American.”

To do that, he clung to his passion — music. He wanted to be a songwriter as long as he could remember, and at age 14 taught himself to play guitar. But Samimi said he could not figure out how an Iranian could have a voice as a songwriter in the United States because he saw no examples of anything that looked remotely like that.

“When I was young, I desperately wanted to be a songwriter and felt pretty inadequate about myself. I would work hard at improvement, then just collapse, crash and burn basically in self-doubt,” he said. “I repeated this cycle honestly, for the better part of 20 years, but just wouldn’t give up.”

Samimi released his first album — created on his cell phone when he had the surprise opportunity to tour with folk singer Chris Sand — at age 30. That “crash course” of songwriting and performing was enough exposure to boost his confidence. Not only did that venture inspire his stage name — Muhammad Seven — and eventually a second album, it led to a profound path of self-discovery, one deeply drawing on his Middle Eastern heritage. His focus homed in on something very close to his heart — the Middle Eastern poor and working people’s movements for social justice.

Samimi took a job at the Arnold Arboretum of Harvard University that allowed him to continue his education in the Middle Eastern Studies program at Harvard. His role as a gardener — a misleading title for the man who is the outdoor maintenance custodian, trash collector, and shop steward at the 281-acre botanical and research institution — gave him plenty of brain space to contemplate his studies, which he said have transformed the way he looks at the world.

“My program has so many inspired individuals dedicated to thinking critically about so many real, tangible, important issues about the Middle East, and it wildly informed my perspective,” he said.

Samimi also wrote two screenplays while in the A.L.M. program, one about Middle Eastern restaurant workers in Boston during 9/11.

“It’s easy to have a narrative in my head that a 41-year-old person should not be doing what I’m doing — following my heart, making a record, pursuing my dreams, and picking up trash,” he said.

David Hunt, a UMass Boston professor who has a Ph.D. from the Harvard Kennedy School, said Samimi was an exemplary student with a “cosmopolitan” sophistication, but at the same time a “neighborhood kind of guy.”

“Nima came across as a young man who had been everywhere and with a keen understanding of what he had lived and seen. This was combined with a modest and unaffected air,” Hunt said. “One day he told me he counted up all the jobs he had had in his life. There were 46, including the Fornax [Bread Company] in Roslindale, where my family shops every day. I think of Nima every time I’m strolling through the Arboretum and am glad to hear he is being recognized by his peers.”

It took Samimi 10 years to finish his master’s degree. That journey, for him, reflects his passion for a better world, and for his wife and their son, Rostam, who began kindergarten this year. This achievement also culminates with the release of his deeply felt new album, what he calls a love letter to the working class. Drawn from his life as an immigrant working person and as a self-conscious investigation into his roots, it’s a significant symbol of his identity.

“I am Muhammad Seven, my band is Muhammad Seven & The Spring,” he said. “The spring is a metaphor for many things — for rebirth, for the Arab Spring, for a spring of water where ideas, hope, and life spring forward.”