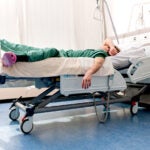 A new study led by researchers from Harvard T.H. Chan School of Public Health and the Broad Institute of MIT and Harvard is the first to have observed the complex set of chemical and molecular events that disrupt the microbiome and trigger immune responses during flare-ups of inflammatory bowel diseases (IBD), including Crohn’s disease and ulcerative colitis.

While previous studies have cataloged microbial changes during IBD, the researchers in this study developed a unique biotechnology toolbox to understand why microbiomes change during IBD and how this provokes an unhealthy inflammatory reaction. These tools allowed them to measure microbial chemical changes and human gene regulatory shifts, potentially allowing for new therapies in the future.

The study, which included dozens of collaborators, was part of the second phase of the Human Microbiome Project (HMP). The project, the first phase of which was launched in 2007 by the National Institutes of Health (NIH) Common Fund, aimed to characterize the microbiome in healthy adults and in people with specific microbiome-associated diseases. The most recent phase of work began in 2013 with the mandate to tease apart the molecular mechanisms underlying the microbiome’s roles in disease.

“The Human Microbiome Project overall has been a flagship effort in understanding the microbiome’s contributions to health, and in creating a community of researchers who can study the microbiome to discover new diagnostics and therapies for disease,” said Curtis Huttenhower, professor of computational biology and bioinformatics at the Chan School, an associate member at the Broad Institute, and senior author of the study. “Our results from this study pave the way for early detection of upcoming flares in disease activity — which can then be aggressively treated — or potentially for new biochemical therapeutic opportunities to encourage complete remission of IBD.”

The finding were published today in Nature.

Each individual’s gut microbiome is a community of trillions of microbes, including bacteria, viruses, and fungi that research indicates play an important role in numerous diseases, including IBD. IBD, which affects more than 3.5 million people worldwide and is growing in prevalence, is a chronic disease marked by periods of remission followed by flare-ups in which the disease becomes active.

For this study, the most comprehensive analysis to date of human microbiome interactions during IBD, researchers followed 132 participants for one year and compared Crohn’s disease and ulcerative colitis patients to a control group of participants who did not have IBD. Participants provided stool samples every two weeks, blood samples approximately once a quarter, and a set of colon biopsies at the start of the study for analysis. In total, 2,965 samples were analyzed with an unprecedented suite of molecular, cellular, and clinical tools to understand the detailed biochemistry of the disease.

First, these detailed measurements made it easy to observe and confirm findings from previous studies, such as a reduction in overall ecological diversity in the gut and the gain and loss of specific pro- and anti-inflammatory microbes during disease.

More importantly, the suite of tools deployed for this study allowed researchers to determine the reasons for the changes. The results showed that during periods of disease activity, people with IBD had fewer microbially derived chemicals, which they speculated could be due to a combination of factors, including less-beneficial microbial metabolism, poorer nutrient absorption, higher levels of water or blood in the bowels, and more urgent bowel movements. These factors decreased the overall stability of the gut microbial ecosystem, leading to more episodes of improper immune responses and overreaction to the normal gut microbiome among IBD patients.

Specifically, during periods of disease activity people with IBD had higher levels of polyunsaturated fatty acids, including adrenate and arachidonate. The researchers also discovered that nicotinuric acid was found almost exclusively in the stools of patients with IBD and that levels of vitamins B5 and B3 were particularly depleted in the guts of people with IBD.

The team found that bile acids — made by humans but chemically modified by gut microbes — were disrupted during IBD as well, in tandem with molecular regulation in groups of microbes. These included a group of bacteria related to the genus Subdoligranulum that are carried by almost everyone, but are depleted during inflammation and have not been previously isolated or characterized.

Overall, the findings provide the most detailed snapshot to date of the microbiome in people with IBD during active and inactive disease states. The findings showed that different forms of IBD — Crohn’s disease compared with ulcerative colitis, for instance — had different effects on the activity and composition of the microbiome. The researchers said the findings provide promising new targets for potential IBD treatments, including polyunsaturated fatty acids, bile acid derivatives, and human immune response pathways, as well as new data, tools, and protocols that will enable future research on IBD and the microbiome.

“Given how tightly connected the microbiome is with our health and well-being, these results shed some light on how we might avoid the problems that arise when this relationship goes awry, and how we might be better stewards of these lifelong companions,” said Jason Lloyd-Price, who worked on the study while a research scientist at the Chan School and the Broad Institute and was lead author of the paper.

Ramnik Xavier, a core institute member of the Broad Institute of MIT and Harvard and co-director of the Broad’s Infectious Disease and Microbiome Program, was also a senior author of the study.

Funding for this study came from National Institutes of Health grants, including funds from the Common Fund, the National Institute of Diabetes and Digestive and Kidney Diseases, the National Center for Complementary and Integrative Health, the Office of Dietary Supplements, a National Science Foundation grant, and an Army Research Office grant.