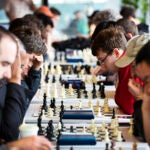 After a Navy career, Jake Moore looks to make human rights his next mission

Jake Moore, M.C./M.P.A. ’19, has had his share of adventures on the high seas. In 15 years as a Navy helicopter pilot and instructor, he has flown missions across the Asia-Pacific theater and beyond, including in support of Special Forces.

With the new ground he has covered as a mid-career master in public administration student at Harvard’s Kennedy School of Government, he has prepared for his next step with the Navy — and for a civilian career beyond.

Moore, 36, a lieutenant commander who has earned several prestigious military awards, is poised to transition to one of two elite assignments. He was selected to serve as a U.S. liaison on the staff of the NATO Supreme Allied Commander in Brussels. Then he was offered the chance to command a helicopter squadron.

“It’s all humbling to me,” said Moore, who in early April was weighing those options.

“I can’t really imagine a better time to be a solid, positive representative of America at NATO,” he said. And added that it was “a great honor to be trusted with the responsibility” of heading a squadron. His decision will be based, he said, on “where I can make the greatest impact on people.” (If he takes the NATO assignment, he would have the chance to lead a squadron later.)

Moore, who came to Harvard as a Navy Politico-Military Masters Fellow, said the Kennedy School has been a “perfect fit” for him because its flexible M.P.A. program has allowed him to focus on leadership development, a topic of particular interest to him as a future squadron commander and one who aspires to update the Navy’s approach to leadership training.

He said preparing leaders will be a core skill for him in the career he hopes to pursue when he retires from the Navy in five years: working with refugees and asylum seekers.

Beyond the academics, “This has been probably the most meaningful period of reflection I’ve had in my life,” Moore said of his time at Harvard, which began in July 2018. After “flying hard for 15 years,” he said, he has enjoyed being able to pause and just be a student, “to unpack 15 years’ worth of leadership experience … and start to imagine what I might do” in the future.

Moore, who grew up in Colorado, joined the Navy ROTC program at Georgia Institute of Technology, where he earned a bachelor’s degree in management in 2004.

After training as a Naval Aviator for two years, Moore spent much of the next 13 years in the Asia-Pacific theater, assigned to helicopter squadrons deploying from aircraft carriers and land bases in Japan and San Diego. His squadrons were kept busy playing a role in the Navy’s frequent interactions with foreign naval vessels in that area — notably China.

He said of those encounters, which often involve efforts by both sides to observe the other or to project power, “The trick is to [avoid] escalating things or becoming unprofessional or dangerous.”

Most recently, from 2016 to early last year, Moore served as a pilot and maintenance department head for a Japan-based helicopter sea combat squadron.

But Moore said among his most vivid memories is from 2012, when he led a helicopter team that assisted in fighting a forest fire in California, saving about 181 homes.

Through his wife, Ali, a case worker with international refugee support organizations, Moore has volunteered over the last five years in assisting refugees and asylum seekers in San Diego and Japan. In December 2018, he was part of a Harvard team that visited the Moria refugee camp on the Greek island of Lesvos and developed a strategy to improve its conditions.

Now he looks forward to the day that human rights work becomes a full-time career.

“There are huge numbers of people suffering around the world, either because of conflict or dire economic circumstances,” Moore said. “When you meet people affected this way … it’s almost impossible not to be compelled to help. I think I will very likely trade one form of service for another and keep going.”