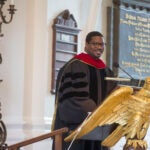 At a Meeting of the Faculty of Arts and Sciences on May 7, 2019, the following tribute to the life and service of the late James Allan Davis was placed upon the permanent records of the Faculty.

Our colleague and teacher Jim Davis was an exceptional scholar devoted to building empirical foundations for social science theory, especially in survey and public opinion research. An innovative and enthusiastic college instructor, he delighted in teaching others about the power and excitement of discovery through research.

Born in Chicago in 1929, Jim’s B.S. was in journalism from Northwestern. He did graduate work in sociology at the University of Wisconsin before earning a Harvard Ph.D. in 1955. His dissertation research on status symbols was about how Cambridge homemakers varied and converged in assessing the contents of living rooms. During his career Jim held faculty appointments at Yale, the University of Chicago, Dartmouth College, and Harvard and directed the National Opinion Research Center. He taught in the Faculty of Arts and Sciences from 1977 until 1994 and was Master of Winthrop House for 15 years, in partnership with his wife, Martha. He both chaired the Department of Sociology and served as its Head Tutor. After becoming Professor of Sociology, Emeritus, he taught for many years as a senior lecturer at Chicago, before passing away in 2016.

Early on, Jim conducted social psychological studies of individual behaviors situated in group settings. A renowned one depicted the college campus as a “frog pond,” finding that relative deprivation shaped career choices among college students. Contending that students assess themselves via comparisons with their on-campus peers, he showed that students of a given ability level displayed less ambition when surrounded by highly capable others. Jim was especially proud of his study demonstrating that Great Books clubs were more apt to retain their adult members when they actively engaged those participants in discussions. In sociometry — a precursor of contemporary network analysis — Jim systematized theory about the interplay between social similarity and interpersonal relations and extensively documented regularities in arrangements of sentiments within small groups.

Jim’s most enduring legacy began with his 1971 proposal to add “twenty-some questions” — on such topics as race relations, happiness, and trust in others — to an ongoing national survey. He envisioned a program to disseminate high-quality social science data widely and quickly — an unusual stance at a time when such data were scarce and often closely held. He sought to facilitate cumulation and replicability in research as well as data-oriented teaching. Jim foresaw a series of surveys to prospectively track social change over time, writing that “[y]ou have to start somewhere.”

From this beginning emerged the ongoing General Social Survey (GSS) project, which has since collected and distributed 31 surveys of American adults. Jim’s GSS-based research centered on opinion trends, especially in support for free expression by nonconformists. He reported that such tolerance rose steadily as younger, better-educated generations succeeded older, less-educated ones. Examining trends across numerous indicators, he concluded that generational turnover was gradually liberalizing the U.S. public opinion climate, countered by “conservative weather” within generations.

The GSS project amply fulfilled Jim’s aspiration to develop a public good. To date, more than 25,000 academic works have used its data, and every year hundreds of thousands of students analyze them in coursework. Data collection enterprises in many other countries modelled themselves on it, and collaboration among their directors (including Jim) established the International Social Survey Programme, which broadly disseminates internationally comparable survey data.

His commitment as an educator — especially of undergraduates — was at least as central as research to Jim’s professional identity. Animated both in the classroom and as a mentor, he was an early practitioner of active learning who quickly appreciated the educational potential of distributed computing. To Jim, the classroom was an interactive problem-solving laboratory. In his introductory course on American society, students learned about such subjects as inequality, family change, or rural-urban population movement by conducting their own elementary data analyses, rather than reading and absorbing the findings of others. His methods courses stressed the underlying logic and principles of social research, accompanied by just enough statistical technique to put them into practice — but no more. Courses required several papers that became more sophisticated as a term progressed. Jim insisted on concise and direct writing, citing the proverb “fine words butter no parsnips” to convey the importance of a sound grounding in evidence and Alfred North Whitehead’s “seek simplicity and distrust it” to encourage students toward straightforward rather than roundabout accounts for phenomena.

As well appreciated for his pedagogy as for his scholarship, Jim won the Distinguished Contributions to Teaching Award from the American Sociological Association and the Joseph R. Levenson Memorial Teaching Prize for excellence in undergraduate teaching from the FAS. Perhaps as important to him, though, was that his students recognized his genuine warmth and commitment to their learning. Upon Jim’s retirement, one concentrator wrote, “[Y]ou did not make me feel [that] I had so much to learn [before I could] approach real problems … you seemed to feel that your students were capable of anything, they just needed conviction and a bit of guidance.” Jim launched many undergraduates, including two members of this Memorial Minute Committee, into academic careers.

Those of us who knew, worked with, and learned from Jim over the years remember seeing his smile, the gleam in his eye, his omnipresent bow tie, and the bookbag over his shoulder as he came across campus or began to teach. We recall his incisive, quick wit, as evident in classes and meetings as in his writing, where it remains on display today.

Jim Davis is survived by Martha, his wife of 66 years, four children (Mary, Jim, Andy, and Marty), and 11 grandchildren.