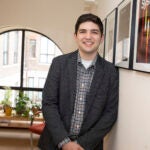 La’Toya Princess Jackson may be most at home onstage or in a recording studio. But when the writer, producer, and performer receives her master of liberal arts (A.L.M.) degree in extension studies in the field of dramatic arts, she’ll be celebrating her work as a scholar.

Jackson was already a recording artist, having been mentored by noted hip-hop producers No I.D. and LRoc, when she began training with Ballethnic in Atlanta, a classically trained, culturally diverse performing company. It was to hone those skills that she first came to Harvard in 2014 for a course in modern dance choreography technique.

“It felt like all the stars were lining up for me to really explore something new here at Harvard while also exploring who I am as an artist,” said Jackson, when we spoke in the Harvard Dance Center.

A native of Fort Worth, Texas, who had earned her bachelor’s degree in mass media arts at Clark Atlanta University, Jackson was considering pursuing an M.F.A. at a more arts- or performance-oriented school. But as she completed that summer choreography course, Harvard announced its Theater, Dance & Media concentration. “A little light bulb went off in my head,” she recalled.  “I was like, well, it’s a long shot, but maybe I could come in the degree program here.”

Since qualifying for the program in 2016, Jackson has been busy, dancing with the Harvard Dance Project under the direction of Jill Johnson, whom she credits as a mentor, and as a member of the Harvard-Radcliffe Modern Dance Company, among other performance projects. Perhaps closest to her heart has been the 2018 production of her original ballet “Vanity Lane,” for which Jackson also wrote the book and danced the lead role, ElectrKPrincess. (Excerpts had been previewed at Harvard’s Arts First Festival a year earlier.) It is this ballet and an ambitious visual album, “(Re)Imagined,” which will encompass video, music, dance, and text, that Jackson intends to work on when she returns to Atlanta to apprentice with Ballethnic.

But on campus Jackson the performer was also Jackson the researcher — specifically into the history of ballet and the contributions of black dancers, choreographers, and company leaders, many of them overlooked. Her thesis, “Black Swans Shattering the Glass Ceiling,” focuses on the black contribution to ballet, from icons such as Arthur Mitchell, founder of Dance Theatre of Harlem, to historical companies like the American Negro Ballet and the New York Negro Ballet, making the case for a reconsideration of the black ballet aesthetic in the United States.

Take Katherine Dunham. “She’s known as a modern dancer,” said Jackson. “But in my research, I found that she started the first black ballet company in the United States.

“People think that blacks are just now making history or you have these one-offs of blacks being in predominantly white ballet companies, but you had a whole ballet company like Dance Theatre of Harlem that has been producing black ballerinas” for decades.

Jackson, a latecomer to classical ballet, had begun to combat de facto segregation in the art form by launching a community-oriented ballet program with the Boys and Girls Club of Metro-Atlanta. She brought those outreach skills with her to Massachusetts, first through the Boys and Girls Clubs and ultimately into Boston Ballet, where now she is a teaching artist with the company’s community programs and the Boston Ballet School. Her historical research has given her a sense of continuity — and of purpose.

“The thesis is very personal for me,” said Jackson. It has been, she noted, part of a journey that took her from Atlanta into historically white institutions like Boston Ballet and Harvard. For Jackson, that also meant joining with two colleagues to create the Extension School Convocation in 2018, a tradition that continues this year, in part to fight the familiar “impostor syndrome.”

“I think all Harvard students go through this, but specifically Extension students,” said Jackson, who also served on the executive boards of the Harvard Graduate Council and the Harvard Black Graduate Student Alliance and is a co-chair of Black Graduation. “Are we really Harvard? Is this really a Harvard degree?

“These are conversations that are happening in the University, not just among Extension students,” she said. “I talk to students all over the University about having this space for inclusion for people who are in different walks of life.”

It is a space she has found at Harvard. “I’ve been able to create my own interdisciplinary track of music, of dance, of performance, and put [together] literally all the elements of what I like to do and who I feel like I am as an artist and even as a researcher,” she said. “I mean, last semester I took a class in popular music and culture and American literature, and my final assignment was on Janet Jackson and black female identity in popular culture. What other program would I have been able to do that in?”

Going forward, she’s hoping that her multidisciplinary approach will pay off. “I’m just crossing my fingers that people will start to gravitate to what I’m doing and want to maybe book me for performances or to hear about the research that I’m doing,” said Jackson. “I feel like I have so many more options available to me now than before I came here.”