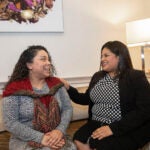 A mobile app that stops cyberbullying, a way to support tenants’ rights and housing advocacy, technology that raises the standard of infection prevention, and a science-driven approach to reinventing everyday consumer products received the four top prizes in the eighth annual President’s Innovation Challenge Showcase and Awards Ceremony.

“The only way [the world] gets better is if good people like you are willing to make it so,” said President Larry Bacow in his introductory remarks.

Each of this year’s four winners was awarded $75,000 in prize money from the Bertarelli Foundation to help them advance their innovations. The winners are ReThink for preventing cyberbullying; JustFix for supporting tenants facing landlord harassment and neglected housing conditions; Kinnos for its patented technology for infection prevention in health care settings; and Jamber for reinventing consumer products that can transform the lives of millions, starting with a coffee mug that even Parkinson’s patients can hold.

“Winning the President’s Innovation Challenge helps us get more Jamber mugs into the hands of more people, which is really meaningful, because we’ve seen stories from all of our customers about how much these mugs are improving people’s lives,” said Diana Arseneau, co-founder and chief science officer at Jamber.

The President’s Innovation Challenge brings the Harvard community together to engage with pressing issues and explore how to turn their ideas into ventures with real-life impact. This year, it attracted more than 400 applications from 12 Harvard Schools. Teams competed across four tracks — Social Impact or Cultural Enterprise; Health and Life Science; “Open,” for ideas that transcend categories; and Launch Lab X for eligible alumni-led ventures. All 20 finalists showcased their products and services Wednesday at Klarman Hall, and gave one-minute pitches onstage before the winners were announced.

In her remarks, Jodi Goldstein, executive director of the Harvard Innovation Labs, talked about the importance of bringing together the Harvard community to solve some of the world’s most challenging problems.

“Our vision has been to create a community where no matter where you are on your journey, you will be welcomed,” Goldstein said. “For us, it’s not just about supporting innovative ideas, but about supporting the people behind those ideas.

The four runners-up, who each received $25,000, were GC Therapeutics, for developing a faster and more efficient cell engineering platform; MDaaS Global, for building and operating diagnostic centers to provide health care to Africa’s next billion citizens; MyToolBox, for creating a labor marketplace for skilled blue-collar workers; and Sophya, for helping students learn more effectively on the internet.

This year, the President’s Innovation Challenge also introduced the $10,000 Ingenuity Awards, for ideas with potential to be world-changing, even if they are not yet fully formed ventures. The Ingenuity Awards grand prize of $5,000 was given to Christina Chang for envisioning the development of a sustainable chemical steel manufacturing process that would decrease global CO2 emissions. Two $2,500 runners-up prizes were awarded to Tauheedah Baker for a tech-based approach to increasing the quantity, quality, and retention of teachers of color in underserved communities, and Nicole Iveyfor making day care centers hubs for everything working parents need.

The Launch Lab X track is also new this year, bringing the total prize money to $410,000.The President’s Innovation Challenge prizes are exclusively funded by the Bertarelli Foundation, which announced the President’s Innovation Challenge Fund in October 2017 to fund the competition for the next five years. This gift extends the Bertarelli Foundation’s previous backing of student-led ventures at Harvard, which began in 2013 when the foundation funded the Deans’ Health and Life Sciences Challenge at the Harvard i-lab.

“The potential in this room alone gives me great hope for the future,” said Goldstein in her closing remarks. “My main message to everyone in this room tonight is this: No matter what, keep innovating.” 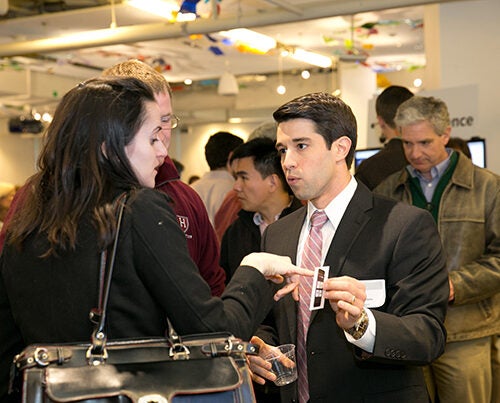 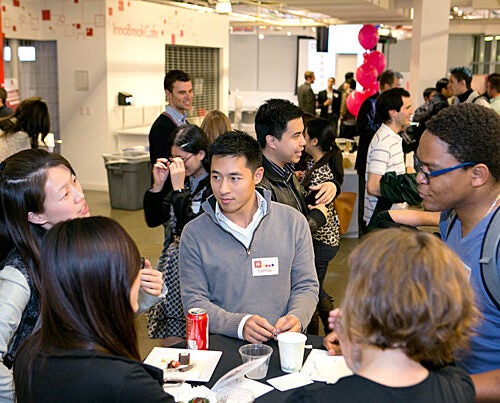