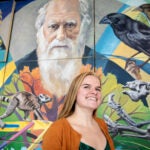 Searching for answers in what lemurs leave behind

Brittany N. Ellis ’19 can remember the moment she began loving museums. “I was in ninth grade, and my mom and I went to the Met [the Metropolitan Museum in New York],” she said. “I was in an ancient history class that focused on past societies through the lens of material remains, and I learned to appreciate objects as media for telling stories about people’s lives. I spent eight hours at the Met that day with my mom, using the objects to tell her stories of the Egyptians, Mayans, and Pueblo peoples. You haven’t been able to get me out of museums since.”

There were plenty of museums in Ellis’ hometown of Pittsburgh, including the Carnegie Museums of Art and Natural History and The Andy Warhol Museum, where she served as an intern. At Harvard, she joined the student board at the Harvard Museums of Science & Culture (HMSC) in 2017 and helped organize events designed to engage undergraduates and prospective students, such as Visitas Night at the Harvard Museum of Natural History.

Ellis said her time on the board was rewarding, noting that members of “the HMSC Student Board [have] the chance to meet with curators and administrators from across museums to learn more about the institutions. As someone who is interested in working in museums in the future, it is helpful to interact with museum staff and learn more about their roles, concerns, and projects.”

Her Harvard concentration is social anthropology and archaeology, and her special interest is in making museums more inclusive. She aims to advance collaborative policies with local communities to involve more people in the curation and collection of objects as well as in display, education, and programming. Ellis is dedicated to the idea of fostering relationships among institutions, researchers, and local communities.

She feels strongly that “museums or researchers that work with cultural sites, objects, or stories have a moral obligation to do so more responsibly and collaboratively. For me, this means working with source communities as much as possible at every level. I hope to focus on directing initiatives for engaging with communities and innovating the ways that museums tell stories and care for the objects they collect.”

Ellis’ favorite exhibit at Harvard’s Peabody Museum of Archaeology and Ethnology is “Wiyohpiyata: Lakota Images of the Contested West,” co-curated by Butch Thunder Hawk, a Lakota artist and teacher, and Castle McLaughlin, a curator at the museum. “The combination of scholarship creates a richer and more contextualized presentation reflecting the contemporary lives of Native American peoples.”

Several teachers at Ellis’ all-girls school in Pittsburgh were instrumental in revealing to her the information contained in the items societies leave behind. “My history teacher was an archaeologist and encouraged us to approach history through objects and artifacts,” she said. “I can remember examining artifacts from an Egyptian village that showed the active role of women in owning businesses, managing property, and making judicial decisions — all through writing that remained on sherds of pottery.”

Ellis spent the past two summers in Jordan on archaeological digs. “My research has shown me how archaeological work has the potential to bring people together or alienate communities,” she said.“[It] also highlighted the need for more critical and truly collaborative methodologies when it comes to working with these materials and spaces.” She cited a researcher in a different field as an early inspiration. “When it comes to conducting research more generally, pioneering field researchers such as [primatologist] Jane Goodall certainly paved the way for women to excel in important field work, sometimes working under harsh conditions.”

Ellis’ near future is at Oxford, where she will study as a Rhodes Scholar. The Rhodes scholarship process was, she said, rigorous and awe-inspiring. “With Harvard’s endorsement, I started applying in August,” she said. “Only two students from each geographic district are chosen.” Rhodes scholars are selected for their academic success, integrity, and devotion to the common good. “The Kirkland House Fellowships Team was helpful in preparing me for the interviews. It was really gratifying to know that the committee members who chose me for the scholarship also believe in what I think is important.”

The scholars were selected in November 2018, the weekend before Thanksgiving. “My mom made the trip to Philadelphia for the interviews so she could be near me throughout that process,” Ellis said. “At first, when my name was announced, I was in shock. It was hard to move or even process what was happening. As soon as I could, I called my mom, who came rushing in from the parking lot and then called my father, who started crying. I was able to celebrate over Thanksgiving with them.”

Ellis also excelled at Harvard as a journalist and news executive at the Harvard Crimson. In addition, she was president of the Radcliffe Union of Students and a Radcliffe Research Partner for two years. Other achievements include a perfect GPA and her election to Phi Beta Kappa as a junior. Finishing up her last semester, she spends time outside of classes either coxing her house crew team on the Charles River or in Allston at the Harvard Ceramics Program studio.

Ellis, who participated in a high school summer program at Oxford, will this time pursue a master’s in visual, material, and museum anthropology, and plans to extend her work toward a doctoral degree in anthropology. “I am eager to return to Oxford, where I first began my critical examination of museums,” she said. “I will use this opportunity to support a life focused on furthering collaboration between museums and communities in order to share stories and make museums the invigorating, accessible, and connective places I believe them to be. … My dream job is to work in a curatorial position at the British Museum.”

Ellis appreciates the Harvard community in which she has thrived. “I’m grateful for the funding that allowed me to attend the College, for the opportunity to study abroad, and everyone in the Anthropology Department who has been so supportive. I especially want to thank John E. Hudson Professor of Archaeology Rowan Flad and my thesis adviser [Professor of Anthropology] Matthew Liebmann.”