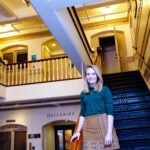 From the Motor City to Harvard, Nicole Johnson has brought energy to spare

Nicole Johnson’s secret to being her best self? Keeping busy.

It’s what fueled her journey to Harvard in pursuit of what could be called a fifth diploma in higher education — and it’s what now has her weighing either a doctorate or more research-based work.

Johnson has taken three courses at a time (the normal load is two) toward her master’s in education policy from Harvard Graduate School of Education (HGSE) while working four jobs, serving as vice president of the HGSE Student Council, and preparing for the Miss Massachusetts International Pageant, which she won in March.

“I have this ridiculous amount of energy and I have no idea where it comes from,” Johnson said, noting with a smile that she never drinks coffee.

But she does plan her day to the minute, from when she wakes up to when she studies to when she goes to bed. And while others may dread the thought of being so busy or having their day so structured, for Johnson it’s normal.

“At this point, [keeping busy] is just something I enjoy,” she said. “It feels like so much of just who I am. To not be this busy would … make me a little antsy to just be sitting at home twiddling my thumbs.”

This “stay busy” attitude dates to Johnson’s childhood in a neglected neighborhood in Detroit. She packed her day with so much activity that she didn’t have time to consider breaking rules. In high school, she joined the Junior ROTC, took lessons in baton, piano, and clarinet, and worked in the school’s main office.

“I would be able to tell my friends, ‘Oh no, I can’t do this bad thing with you because I have after-school practice or I have this organization meeting that I have to go to,’” she said. “The busier I got, the more excuses I was able to give people.”

Johnson set herself apart, graduating while many of her peers did not.

The Detroit Public Schools Community District has perennially been ranked among the worst in the nation. In 2007, the year after Johnson graduated, Education Week cited the district’s graduation rate as below 25 percent (though a district spokesman said it was more than twice that, accounting for students who left the district and graduated from other systems).

“When I was a little girl, or even a high school student, I would have never in a million years thought that a person like me could even apply to Harvard or a [doctoral] program,” Johnson said. “I wasn’t even sure that I would go to a four-year college.”

But go she did, to Eastern Michigan University, in Ypsilanti, where she earned a bachelor’s degree, a master’s, and two graduate certificates — while, of course, working full time.

“Pretty much, I have taken classes — at least one, every single semester — year-round for about the past 10, 11 years,” Johnson said. “I really enjoy school, if you can’t tell.”

Johnson went on to work at Washtenaw Community College, in Ann Arbor, then applied to Harvard.

Arriving here, she had a clear goal: Take advantage of opportunities, one of which was to participate in large-scale academic and field research projects. “I absolutely can’t leave here without research experience,” she told herself.

While taking those three simultaneous grad courses, she participated in three research projects and worked as a fellow at HGSE’s Education Redesign Lab. The projects delved into types of research she wanted to learn about: quantitative, qualitative, and experimental. They ranged from studying whether teachers would present their classroom lessons differently if they could collaborate on the lesson plan with fellow teachers, to convening focus groups on how to best support over-age students in a Massachusetts public high school, to examining the theory that learning should focus on things a student will actually use in the real world.

“I kind of got all of the different [research] buckets,” Johnson said. “So, mission accomplished.”

All this helps Johnson feel like her best self, she said, a notion she got from competing in pageants since she was about 16 years old.

“When you compete in a pageant, you are your best self,” Johnson said. You are in the best shape you can be, you’re involved in community organizations, and your grades are the best they can be because judges look at that as well, she said. “Even though there is this glamorous side of things, it helps you a lot on a personal level.”

From her mix of experiences, Johnson has come to feel a responsibility to succeed for the people who have helped to get her where she is — such as her mother.

In the spring semester of Johnson’s freshman year at Eastern Michigan, room and board fees were pending and she didn’t have the money. (She didn’t know about federal student aid when she applied to colleges.) The day the bill was due her mother showed up and paid it. Johnson didn’t ask where the money had come from; she was just grateful to be able to stay. Months later, Johnson noticed that her mother wasn’t wearing her wedding ring; she had sold it to pay the college fees.

“Once she made that sacrifice for me, it made me realize that there were so many other people in the world that were counting on me to be successful,” Johnson said. “It made me think of not only my mother but of all my teachers, or my counselors, or even the kids that I grew up with that unfortunately didn’t have the opportunity to go to college. I have to be responsible for my future. I saw that as my turning point and my opportunity to make my life what I wanted it to be. Because of that I always shoot for really, really high expectations for myself and also opportunities.”