Searching for answers in what lemurs leave behind 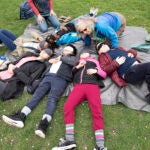 It was just poop, but it was something of a dream come true for Camille DeSisto.

The Harvard College senior loves travel and the environment, so spending two summers in Madagascar’s tropical forests studying invasive plant dispersal — the island nation’s lemurs eat the plants’ fruit and poop out the seeds — was exciting and, just a few years earlier, had been unimaginable to her.

“I’ve always been so interested in the environment — in conservation in particular,” DeSisto said. “But I never dreamed I would have done research in tropical forests with lemurs.”

DeSisto, an organismic and evolutionary biology concentrator from Pforzheimer House, did more than just follow lemurs through a forest. She directed an independent field crew, supported by funding from Harvard and outside sources, over the course of those summers. They surveyed forest tracts to assess the spread of the strawberry guava, a Brazil native that aggressively spreads in Old World tropical forests. The team also did germination experiments to see if consumption by different lemur species helps or hurts germination odds, and they collected leaves for genetic analysis.

“It was really just throw me into the thick of it and figure it out as you go along,” DeSisto said. “There was really no time to be daunted. Everything was just super exciting, but challenging for sure.”

The strawberry guava is spread widely along Madagascar’s tropical east coast, and DeSisto’s genetic analysis showed that the tree had probably been introduced three times. She also found that germination success differed according to which lemur species ate the fruit, with some lemurs giving the forest invader a boost and others seeming to retard germination.

“The plant is everywhere along the eastern rainforest,” DeSisto said.

Though she directed the project, DeSisto said she relied heavily on the field workers and a graduate student from a local university for their knowledge of the plants, local names for them, and information on pathways through the forest that allowed them to conduct research safely.

“I really relied on local knowledge for everything,” DeSisto said. “In a lot of ways, it’s their project.”

Back at Harvard, DeSisto worked in the lab of Charles Davis, professor of organismic and evolutionary biology and the director of the Harvard Herbarium. Davis said he was impressed that DeSisto took on in-depth study at a point in her academic career when many students are trying out various things in the course of deciding their interests for the future.

“She really does want to understand this deeply and from multiple angles,” Davis said. “She’s the real deal.”

Davis gave DeSisto high marks for the quality of her research — he expects to see her results in a scientific journal — and for the importance of the subject she tackled.

“She’s the kind of person who gives me hope for the future of these issues.”
— Charles Davis

Invasive species are a problem everywhere in the world, Davis said, but are particularly dangerous on islands like Madagascar, where they can threaten native plants that are unlike plants anywhere else.

The project, DeSisto said, highlights the complexity of finding the right path when natural landscapes are influenced by human activities. Though the strawberry guava, which can grow to 40 feet, is displacing native trees, it’s not a matter of simply uprooting the plants. They are widely spread, and also strawberry guavas are eaten by lemurs, some species of which are endangered. In addition, DeSisto said, local human populations have developed uses for it, one of which she discovered when she became ill and a the field workers suggested she chew guava leaves.

Even for lemurs, the tree might not be all good news. There’s some indication that the strawberry guava is beneficial to fruit-eating animals, DeSisto said, but the decline in tree species diversity that accompanies invasion may mean that there are fewer resources during the nonfruiting months. “It’s a complicated problem,” she said, “but for sure a problem.”

DeSisto, who grew up in Boston, credited her mother, a clinical social worker, for her love of travel, and her father, who works in construction, for her environmental bent. She has a brother and a twin sister, Isabelle, who is a year behind her at Harvard after taking a gap year.

“Our family car ran on vegetable oil,” DeSisto said. “We were definitely your classic environmentalist family.”

DeSisto attended Boston Latin but credits her summer activities with feeding the budding environmentalist inside. She worked as a “green ambassador” on Boston Harbor’s Thompson Island one summer and got a taste of research during another at the Chincoteague Bay Field Station in Virginia.

At Harvard, DeSisto became active in the outdoors community, participating in the First-Year Outdoor Program and becoming president of the Harvard College Conservation Society. A swimmer in high school, she joined the club swim team, which she said was important in “grounding” her at times.

Her path to Madagascar, in the Indian Ocean off the coast of East Africa, started when she joined Davis’s lab and began working under the guidance of a visiting fellow from there, Onja Razafindratsima. She began her Madagascar project in summer 2017, after spending a month in Ranomafana National Park on a project with the Harvard Planetary Health Alliance. When that work was done, she spent the next two months getting her own work up and running. She returned in 2018 for another three months. DeSisto said her experience in the Davis lab helped her develop a deeper appreciation for both plants and genetic analysis, which Davis suggested she perform to better understand the strawberry guava.

Graduate school is in DeSisto’s plans, but first, she is returning to Madagascar to research ants. After that, she’ll begin a Fulbright scholarship in Ecuador, studying mangrove forests.

“She’s the kind of person who gives me hope for the future of these issues,” Davis said.