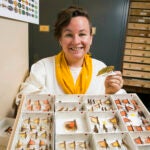 The constant in Simi Shah’s life has been her passion for her heritage.

She grew up in Duluth, Ga., a child of Indian immigrants. The family’s early struggle is one she holds dear, and she developed close ties with the South Asian community there — ties she would preserve when she went off to college.

Shah, who concentrated in economics with a minor in government, joined the South Asian Association (SAA) as a first-year and served as its co-president in 2018, became captain of the Harvard Bhangra Dance Company, and helped to produce SAA’s “Ghungroo,” the annual student-run performance and celebration of South Asian culture.

She also launched a podcast with her friend and fellow senior Kailash Sundaram to highlight South Asian American pioneers in the hopes of unifying their community. The first episode featured Vivek Murthy, the U.S. Surgeon General during the Obama administration.

“I think it’s a pretty unprecedented cohort of people out there who are role models for our generation,” Shah said. “There have been remarkable strides [for South Asian Americans] in one generation, whether they were immigrants or their parents were immigrants, but no one’s fully talking about it.”

“We used Harvard’s name and mission to get people excited to speak to people in the shoes they were once in and be an inspiration to those coming after them,” Sundaram said.

Shah grew up hearing stories about her family. Her paternal grandfather was poor and worked to put his five children through school. When her father immigrated to the United States in the 1980s, it was “the very classic story, with $8 in his pocket.” He worked in engineering before becoming an entrepreneur. He is now chairman of a bank.

“The joke is that my sister, 10 years older than me, was born with the wooden spoon and I was born with the silver. I was born at a time when my parents were at a much more stable place, but of course I’m always exposed to those stories,” Shah said. “My sister spent a lot of her adolescence in a Days Inn because my family’s in the hotel business. My mom would work the front desk, work nights until she had me.”

Shah understands the pressure to succeed and her whirlwind years at Harvard have been nonstop. In high school, she said, she aimed for the best college she could go to, and she hit the ground running.

For four years, Shah has been involved in a flurry of countless clubs, activities, and internships, in many of which she has held leadership roles. From Harvard Women in Business, to Expressions Dance Company, to Hillel’s annual Israel trek, to the Harvard College Consulting Group, no two weeks looked the same.

“Anytime I had a free moment, I was trying to do something for the organizations I was a part of,” Shah said. In her final few weeks, she is doing a different kind of cramming and trying to experience things she’s never done at Harvard.

“I don’t think I could have had any sense of what [being at Harvard] meant and I still don’t think I fully grasp what it means to be here and I don’t think I will for many years. … I wish I’d started day one,” she said.

Being part of so many organizations has strengthened her relationships and, four years on, she said she is still learning more about these friends every day.

“Everyone here is brilliant in their own way and has so much story behind who they are and how they’ve gotten here,” she said. “It’s a really humbling group of people to be around.”

Sundaram’s friendship with Shah has grown through their podcast.

“She’s someone who is very tenacious. If there was someone I needed to get the job done, I’d give her a call,” he said. “Her passion is infectious.”

Her support and presence has been essential to Sundaram, especially this past year: “When I was writing my thesis, she was there to celebrate with me and take in the moment with me.”

Post-graduation, Shah will be working in private equity with the firm Audax Group, developing her financial technical knowledge. Eventually, she wants to go to business school to help her family’s hotel management business continue its legacy. She also hopes to explore her passion for writing.

“There’s this quote I saw on a grad cap a number of years back and I think I’m going to put it on mine: ‘I am my ancestors’ wildest dreams,’” she said. “I wish my grandfather had been here to see me get into Harvard. … I think for him to see how hard my family has worked to be where we are and to have a grandchild that goes to Harvard is something that has been very important to me.”