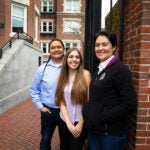 “When I make up my mind about doing something, I get it done,” said the former Navy pilot, speaking recently from her Virginia home.

Fighting the odds is nothing new to the Cameroon native who once taught herself to swim in a few months so she could meet the Navy’s entry-level water-survival requirements for pilots, which included treading water in full military gear and taking a plunge from a 12-foot-tall tower. And now she’s ready for her next challenge.

This year, Maroadi graduates from the Harvard Extension School with a master’s degree in international relations, a clean bill of health, and a happy toddler at home. But she almost never made it to Cambridge.

She first felt a lump in January 2016. Initially, doctors were unconcerned. But after several months of tests, Maroadi learned she had stage 3 breast cancer. She endured a bilateral mastectomy, reconstructive surgery, radiation, and chemotherapy. The love of family and friends helped her face “such an aggressive, life-threatening disease,” she said. So, too, did Harvard.

While receiving treatments in 2016 and 2017, Maroadi flew to Boston from Washington, D.C., twice a week for classes in international relations and psychology. “Harvard Extension School was my escape during this challenging period,” she said. “It helped me feel like I was useful, it helped me feel not so imminently mortal, and it also helped me plan for the future.”

Doug Bond, one of Maroadi’s Extension School instructors, called her “a joy to have in class.”

While teaching his course on international relations, Bond said he learned a lot about his area of expertise, the region of Africa that comprises the Economic Community of West African States (ECOWAS), from Maroadi who grew up in neighboring Cameroon.

Her diagnosis, he added, never slowed her down. “I just love her smile and her integrity,” said Bond. “She doesn’t just learn about life, she lives it the same way … she does everything 100 percent.”

Maroadi hopes to work with an organization like the United States Institute of Peace or the World Bank when she retires from two decades of Navy service next year. Giving credence to her ambitious plans are her military background, her ability to speak five languages, her new Harvard degree, and her fierce determination.

She credits her parents with both her drive and her desire to give back. Her father studied engineering in the United States and put his knowledge to work in Africa, helping develop Cameroon’s infrastructure. Her mother, a teacher and a strong believer in education, founded two schools in the country for children of limited means.

After high school, Maroadi studied in Italy, eventually traveling to the U.S. to pursue two bachelor’s degrees, one in computer science and another in math. While finishing college at the University of Texas, Austin, she enlisted in the Navy. There, she found a mentor, a member of the elite Blue Angels flight squadron, who encouraged her to become a pilot. She flew reconnaissance and surveillance missions from 2005 to 2008, received her master’s degree in national security and strategic studies from the Naval War College in Rhode Island in 2009, and returned to Italy to engage in diplomatic work for the Department of Defense. In Italy, she met her husband and they tried to start a family, but Maroadi was unable to conceive. It was “devastating,” news, she recalled. But it didn’t stop them. They contacted a surrogate early in 2016 in the United States, where Maroadi had been stationed for further military training. Then came her diagnosis.

At the hospital that summer for a new biopsy, she was advised to prepare for grim news. On the same day, the surrogate told her they were pregnant. “Everything seemed perfect in that moment,” said Maroadi, who recalled thinking, “I don’t care what my biopsy results show, I am going to beat it.”

“It was a relief to be able to go to Harvard and do something different,” she said. “Everything else in my life involved being ill; but when I traveled to Cambridge, we discussed how to inspire strategic empathy or how to identify early warning indicators as we worked on our tasks to save the world from conflict.”

When her treatment was over, she took advantage of the Extension School’s online courses to study remotely. “I could be in class,” she said, “while I cuddled my baby.”

Now cancer free, Maroadi is busy planning the next steps in her career and adjusting to having an energetic toddler at home. She is also helping other women struggling to conceive by sharing her own challenges with them. “I realized that we often suffer alone,” she said, “when we could help each other survive the trauma by sharing our stories.”

Like all graduates, Maroadi only gets two tickets for Harvard’s commencement ceremony, but two is all she needs for her husband Andrea and her son Léo Oyé, who will be cheering for her in the crowd. The name Léo represents their struggle to overcome adversity, she said. “Like a lion, he is our symbol of strength and courage that pulled my husband and me out of darkness.”

Oyé, she added, is a word in Ejagham, the language spoken in her village in Cameroon. “If you are praying to God and you are immensely thankful for something,” said Maroadi, “you say Oyé.”