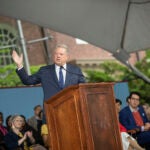 Recipients include a chancellor, Drew Faust, an editor, a museum director, and distinguished professors

Widely regarded as Europe’s most powerful leader and “Chancellor of the Free World,” Angela Merkel was sworn in as German chancellor on Nov. 22, 2005, the first woman and the first East German to hold the office.

With her slogan “Wir schaffen das” — “We will manage it” — Merkel’s four terms have been marked by shrewd resolve and pragmatism, along with an openness to positions from across the political spectrum if sensible and popular, as exemplified by her decision to phase out nuclear power after the Fukushima accident in 2011. Her welcoming of migrants and refugees and  handling of the European debt crisis, on the other hand, showed Merkel’s willingness to do what she believes is right, even if out of favor.

Last fall, she stepped down as head of the Christian Democratic Union, the party she joined in 1990, and announced that she will step down as chancellor when her current term ends in 2021.

Merkel’s many honors include the Grand Cross 1st Class of the Order of Merit of the Federal Republic of Germany, the U.S. Presidential Medal of Freedom, and the 2018 J. William Fulbright Prize for International Understanding. Time magazine named her its person of the year in 2015, and Forbes ranked her first on its 2018 list of the World’s Most Powerful Women.

The founding director of the Smithsonian’s National Museum of African American History and Culture, Lonnie G. Bunch III has used his position to help millions of visitors understand African American history as fully American history. In previous work as the associate director for curatorial affairs for the National Museum of American History, he developed exhibitions such as “Smithsonian’s America,” which explored the history, culture, and diversity of the U.S., and as president of the Chicago Historical Society he initiated outreach to diverse communities and launched a much-praised exhibit and program on teenage life titled “Teen Chicago.”

A historian, curator, educator, and prolific author, Bunch has written on topics ranging from slavery (“Slave Culture: A Documentary Collection of the Slave Narratives”) to the presidency (“American Presidency: A Glorious Burden”) to American museums (the award-winning “Call the Lost Dream Back: Essays on History, Race and Museums”).

Bunch served on the Commission for the Preservation of the White House under Presidents George W. Bush and Barack Obama, and has been included in the American Association of Museums’ 100 most influential museum professionals and twice in Ebony Magazine’s 150 most influential African Americans. In 2017, he was elected to the American Academy of Arts and Sciences.

Daubechies was born and educated in Belgium and moved to the U.S. in 1987. She came to Duke in 2011 after stints working for Bell Laboratories and then Princeton University, where she was a professor of mathematics. She is best known for her discovery and mathematical analysis of compactly supported wavelets, which are used in image compression, such as in JPEG 2000 for both lossless and lossy compression. Her book, “Ten Lectures on Wavelets,” won the Steele Prize for Mathematical Exposition in 1994.

Daubechies’ current research focuses on the development of analytic and geometric tools for the comparison of surfaces, an understanding that is central to many scientific disciplines and to the construction of video animations and many medical and biological applications. She is also interested in improving secondary mathematics education in the U.S. and around the world, and in the stimulation of mathematics, science, and technology in developing countries.

Harvard president emerita and Arthur Kingsley Porter University Professor, and the founding dean of the Radcliffe Institute for Advanced Study from 2001–2007, Drew Faust is the author of six books. The most recent, “This Republic of Suffering: Death and the American Civil War,” was awarded the 2009 Bancroft Prize and the New-York Historical Society’s 2008 American History Book Prize, and was one of The New York Times’ “Ten Best Books of 2008.” It was also the basis for an Emmy-nominated episode of the PBS “American Experience” series titled “Death and the Civil War.”

Faust was elected to the American Academy of Arts and Sciences in 1994, the Society of American Historians in 1993, and the American Philosophical Society in 2004. In 2018 she was awarded the John W. Kluge Prize for Achievement in the Study of Humanity by the Library of Congress.

Faust made expanded financial aid and diversity and inclusion the hallmarks of her tenure. At the same time as leading the enormously successful Harvard Campaign, which raised $9.6 billion to advance Harvard’s mission, she advocated for increased federal funding for scientific research, raised the profile of the arts on campus, increased international outreach, embraced sustainability, launched edX, and promoted collaboration across all academic disciplines and administrative units.

Medieval historian William Chester Jordan is Dayton-Stockton Professor of History at Princeton University, where he has also been director of the Program in Medieval Studies and director of the Shelby Cullom Davis Center for Historical Studies. Jordan was chair of Princeton’s History Department from 2008–2017.

A prolific author, Jordan’s 1996 book “The Great Famine: Northern Europe in the Early Fourteenth Century” was awarded the Haskins Medal of the Medieval Academy of America. His most recent work, “The Apple of His Eye: Converts from Islam in the Reign of Louis IX,” won praise from his colleagues as “exquisite, sharp, and brilliant.” He has also edited a one-volume encyclopedia of the Middle Ages for elementary schoolchildren and a four-volume version for middle schoolers, and was editor in chief of the first supplemental volume of Scribner’s “Dictionary of the Middle Ages.”

His current research focuses on French-English relations in the 13th and early 14th century.

David Remnick has been editor of The New Yorker since 1998 and a staff writer since 1992. Under his leadership, The New Yorker has won 48 National Magazine Awards, including multiple citations for general excellence, and was named a finalist 178 times, more than any other publication. In 2016, it became the first magazine to receive a Pulitzer Prize for its writing, and has since won four, including the gold medal for public service.

Remnick began his reporting career as a staff writer at The Washington Post in 1982. Six years later, he started a four-year tenure as the newspaper’s Moscow correspondent, an experience that formed the basis of his 1993 book “Lenin’s Tomb: The Last Days of the Soviet Empire,” which won both the 1994 Pulitzer Prize for nonfiction and a George Polk Award for excellence in journalism.

Remnick has contributed to The New York Review of Books, Vanity Fair, Esquire, and The New Republic. He has been a visiting fellow at the Council on Foreign Relations and has taught at Princeton University, where he received his B.A. in 1981. He was elected to the American Academy of Arts and Letters in 2016.

Emmanuel Saez is an economics professor and director of the Center for Equitable Growth at the University of California, Berkeley, and a former assistant professor at Harvard. His research with French economist Thomas Piketty examined tax policy and inequality from both theoretical and empirical perspectives, finding that the top earners in the U.S. have taken increasingly larger shares of total income over the past 30 years, and that current income inequality levels are as high as they were before the Great Depression. Saez has recommended a marginal tax rate of 73 percent or more for the wealthy. With Harvard economist Raj Chetty and others he has also researched social mobility in the U.S., concluding that significant geographical differences correlate with segregation, income inequality, local school quality, social capital, and family structure.

He is editor of the Journal of Public Economics and co-director of the Public Policy Program at the Center for Economic and Policy Research.

Saez earned his Ph.D. in economics from the Massachusetts Institute of Technology in 1999. He was awarded the John Bates Clark medal of the American Economic Association in 2009 for bringing the theory of taxation closer to practical policymaking, and a MacArthur Fellowship in 2010 for his research into the connection between income and tax policy.

Marilyn Strathern is a professor of social anthropology emerita, and Life Fellow of Girton College, Cambridge University, where she was mistress from 1998–2009.

Strathern began her career studying the Mount Hagen people in Papua New Guinea, challenging social constructs of gender norms and arguing that the world is “ontologically multiple,” made up of many constructed but independently existing realities. Later, in the U.K., she became involved with anthropological approaches to modern reproductive techniques such as in vitro fertilization, which she believes will lead to new understandings of kinship.

She is probably best known for “The Gender of the Gift: Problems With Women and Problems With Society in Melanesia,” a critique of anthropological theories of society and gender relations applied to Melanesia, a subregion of Oceania, and “After Nature: English Kinship in the Late Twentieth Century,” a comment on the cultural revolution at home. Her most recent book, “Before and After Gender: Sexual Mythologies of Everyday Life,” is also one of her first, written in the early 1970s but not published until 2016.

Strathern is a Fellow of the British Academy and was named a Dame Commander of the Order of the British Empire in 2001. Now retired from the Cambridge, she is the honorary life president of the Association of Social Anthropologists of the U.K. and Commonwealth.

An alumnus of both Harvard’s Ph.D. program and its faculty, Wu Hung is the Harrie A. Vanderstappen Distinguished Service Professor of Art History and the College at the University of Chicago.

Born in Sichuan, China, he worked as a curator in the Palace Museum of the Forbidden City before coming to America in 1980. After earning his doctorate in art history and anthropology in 1987, he taught at Harvard from 1987–1994.

Wu Hung has written extensively on contemporary and traditional Chinese art, in publications including “Monumentality in Early Chinese Art and Architecture,” “Remaking Beijing: Tiananmen Square and the Creation of a Political Space,” and most recently “Zooming In: Histories of Photography in China.”

An awarded teacher and a member of both the American Academy of Arts and Sciences and the American Philosophical Society, Wu Hung also delivered the A.W. Mellon Lectures in the Fine Arts at the National Gallery of Art this year. His six-part series explored how “dynastic time” in China was represented in art and emerged and defined itself in historical contexts, responding to and inspiring religion, politics, and art through the ages.

Wu Hung is also the director of the Center for the Art of East Asia, and consulting curator of the Smart Museum of Art at the University of Chicago.