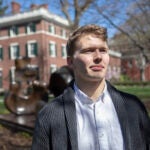 Harvard College seniors Kabir Gandhi from Dunster House, Genesis De Los Santos from Eliot House, and Lucila Takjerad, a master of public administration student at the Harvard Kennedy School, were selected as speakers on Commencement Day, which is among the University’s highest student honors.

The three were selected after a two-month competition that kicked off with a workshop in early March and wrapped up when the winners were selected on April 23. On May 30, in addresses that traditionally combine poignant reflection, pointed observation, and a bit of humor, they will reflect on their careers here, the places from which they came, and where they and classmates might be going.

As an applied math concentrator, Gandhi might seem an unusual choice to deliver a speech in Latin to thousands. But to him, that’s kind of the point of getting a liberal education in a place like Harvard.

“I could go from reading Virgil with experts like [Pope Professor of the Latin Language and Literature] Richard Tarrant to thinking about how to model temperature regulation of the atmosphere,” Gandhi said. “That kind of balance, I think, is what makes liberal arts really special.”

Gandhi will draw on that diverse background in his address, “A Library and a Garden,” which refers to a quotation by the Roman orator and statesman Cicero: “If you have a garden along with a library, you have everything you need.”

Gandhi said one of Harvard’s libraries — at Dunster House — was something of a refuge for him and is one of the special places on campus on which he will reflect. The library, he said, was recently restored in a way that updated it, honored its history, and made it a comfortable spot where he wrote most of his essays and did most of his problem sets.

In addition to making the classics a secondary concentration, Gandhi is receiving a Chinese language citation. After Commencement and a summer at home in New York, he plans to embark on a yearlong Schwarzman Fellowship, studying in China at Tsinghua University in a one-year master’s program.

The Boston housing development Genesis De Los Santos grew up in may seem a world away, but isn’t so different from Harvard, she said. Commonalities emerge, as long as one looks for them instead of differences. Physically, each set of buildings shares unifying architectural features, and, from a human standpoint, each place houses a community upon which De Los Santos came to rely.

De Los Santos said she began to notice the similarities when she revisited the South Street housing development in Jamaica Plain while working on a documentary for class. She lived there until her family moved to Dorchester when she was 12.

De Los Santos, an Eliot House senior graduating with a concentration in history and literature, will draw not only on the differences that are often perceived to separate the two places but also on their similarities in her Senior English Address, “Just off the Orange Line.”

“I talk about the communities that shaped both my experiences growing up and experiences at Harvard,” De Los Santos said. “I thought about it for a very long time before I submitted it.”

If those two communities shaped her, De Los Santos also helped to shape them. For family and friends, she said, Harvard has gone from an inaccessible place to someplace real — and realistic, if one works hard enough.

Her own Harvard journey was at times rocky. She transitioned from being a first-year who felt out of place to being a sophomore who found groups to connect with, to being an upperclassman who finally felt part of the broader Harvard community. After graduating, De Los Santos plans to embark on a one-year travel fellowship, visiting France, Senegal, the Dominican Republic, and Haiti.

To Lucila Takjerad, little things mean a lot, and sometimes they mean everything.

Takjerad, a mid-career master in public administration student at the Harvard Kennedy School (HKS), is delivering the Graduate English Address, “The Least You Can Do.” Takjerad said that faculty and students here are so focused on big, world-changing problems that it bears reminding that small things can also be catalysts for change.

Takjerad was born in Algeria. Her family moved to France during the Algerian civil war in the early 1990s. Though they struggled, Takjerad said she received a quality education that opened up many opportunities in life. She studied business and worked in finance before deciding to take a year off and apply to Harvard.

Her time at Harvard has changed many of her plans for the future, she said. One thing that hasn’t changed, though, is her determination to embark on work that helps people after she graduates. She isn’t sure exactly what form that will take — both nonprofit work and government service in either Algeria or France are possibilities. What matters to her, she said, is making a difference in the lives of the communities she serves.

“It’s been humbling and transformative,” Takjerad said of her HKS experience. “When I came to Harvard I had a career plan, which was blown to bits by all my inspiring classes and discussions with classmates.”