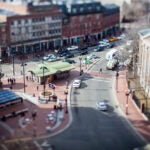 Dominique Erney was a child when she saw the devastating effects of the criminal justice system on incarcerated people and their families.

“I have family members on both sides that have been incarcerated throughout my life, so the system is something that I was very intimately aware of as a young person,” said Erney, who was born and raised in Gainesville, Fla. “When I came to college, I was able to step back from my own personal experience and realize that mass incarceration isn’t just happening in my life, but it’s a systemic issue that I could study.”

In her years at Harvard, Erney ’19 has focused on reforming the criminal justice system through public policy, electoral politics, and academic research. Blending the personal with the political and moving between the spheres of theory and practice is familiar territory for Erney, who grew up navigating in different worlds in her own family.

“On my mom’s side, I’m a first-generation college student, and my father didn’t go to college, but my paternal grandparents are highly educated,” she said. “I’m also biracial, and throughout my childhood I was back and forth between worlds, code-switching a lot” across divisions of race and class.

Learning those dichotomies helped Erney adjust to new or difficult circumstances, including the transition from her hometown and school, which she attended for 13 years, to life in the Northeast and at Harvard.

“I had a very nontraditional upbringing, but even when my parents were struggling, I didn’t feel destabilized,” she said. “I’ve had to adapt to many situations in my life, and I knew I would be able to make it here and settle in.”

Once on campus, the worlds of politics and theater became twin pillars of support for Erney. She got involved in politics through the Harvard Kennedy School’s Institute of Politics (IOP) and the Harvard College Democrats. In her first year, her commitment to criminal justice reform crystallized at a seminar hosted by the IOP’s Politics of Race and Ethnicity (PRE) program with Elizabeth Hinton. Hinton, the John L. Loeb Associate Professor of Social Sciences in the Department of History and the Department of African and African American Studies, brought a community organizer from Los Angeles, who had been incarcerated, to speak to the group.

“He went through the things he would fix about the prison system, which made me think about my family members and how they had gone through the same thing,” said Erney. “It really touched me, and I thought, why couldn’t I be the person who is part of this group that is going to fix this?”

Erney attacked the issue head-on in all facets of her life at Harvard. The social studies and African American studies concentrator served on the executive committees of the College Democrats and the PRE program and wrote her senior thesis on the role of plea bargains in the continuing subjugation of black Americans. She also spent two summers in Washington, D.C., working first at the Justice Policy Institute and then at the American Civil Liberties Union’s National Prison Project.

“My summer jobs were crucial because they showed me that I was learning something worthwhile and useful to the sphere that I want to work in after graduation,” she said. “It was important to ground myself in the work, so that I could have an informed opinion when it came time to write my thesis.”

Anya Bassett, the director of studies and a senior lecturer in social studies who served as Erney’s academic adviser, was impressed by her thorough approach to complex issues. “Dominique stands out for her intellect and the way she combines her deep moral commitment to social justice with the work that she does on criminal justice reform,” said Bassett. “She is a student who pushes us to the limits of possibility, and is always thinking about how to make the world better.”

With the College Democrats, where she was vice president in 2018, Erney participated in the political side of change-making during the 2016 and 2018 elections. Working on campaigns across New England helped her understand how issues such as criminal justice reform, health care, and immigration affected people outside of her academic and political orbits.

“Campaigning definitely made me feel closer to the issues that I cared about in the abstract,” said Erney. “When you’re knocking on people’s doors to talk to them, those issues are not abstract at all. You find out whether the things you spent a lot of time thinking about matter or don’t matter to people.”

Erney’s involvement with the College Democrats was also a way to channel the energy and focus she poured into musical theater as a child. A prolific performer since age 5, Erney loved the way plays brought people together for a common goal. At Harvard, she worked as a producer and stage manager for productions including the freshman musical “All’s Fair!” and “Macbeth.”

“Being in a musical with people is about working toward opening night and the run of the show, producing a good product, and having fun,” Erney said. “That bond and engagement you feel with people is something I’m attracted to, and campaigning ties that together with values that I care about a lot. The camaraderie you build with people is intense and is unlike many other things I’ve experienced.”

As Erney wraps up her senior year, her plans are intrinsically tied to the future of the reform movement.

“Criminal justice reform intersects with so many different fields and you can work on it from many angles,” said Erney. “At some point, I want to go to law school and become a public defender, but I also want to work in advocacy. I’m committed to this issue in whatever I do next.”