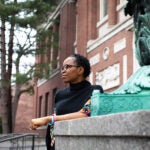 SEAS, Center for Astrophysics, and the departments of chemistry, economics, neurobiology, public health, and applied physics are represented

NAS is a private, nonprofit institution that recognizes achievement in science by election to its membership. Established under a congressional charter signed by President Abraham Lincoln in 1863, it now counts 2,347 voting members and 487 foreign associates among its members.

In addition to welcoming new members, NAS presented 19 awards to honor extraordinary scientific achievements in a wide variety of fields. Two were presented to Harvard faculty.

Xiaowei Zhuang received the 2019 NAS Award for Scientific Discovery. Zhuang is a pioneer in super-resolution imaging, single-molecule imaging, and genome-scale imaging. The technologies developed in her laboratory have provided critical understanding of the molecular mechanisms of cellular function. Zhuang is a Howard Hughes Medical Institute Investigator, David B. Arnold Jr. Professor of Science, professor of chemistry and chemical biology, and professor of physics at Harvard.

The 10 Harvard faculty are among 100 new members and 25 foreign associates recognized by the NAS this year. They are: