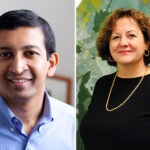 Will step down this summer to assume his new role

After seven years as Harvard’s Plummer Professor of Christian Morals and Pusey Minister of the Memorial Church, Jonathan L. Walton will step down this summer to assume the role of dean of the Wake Forest University School of Divinity, Harvard announced today.

When he assumed leadership of the Memorial Church in 2012, Walton took over the role held for almost 40 years by Harvard legend Peter J. Gomes, a renowned Baptist preacher and scholar with a fierce wit who challenged intolerance and prejudice from the pulpit.

It may have been a daunting task, but Walton made the job his own by simultaneously respecting its long history and his predecessor while expanding efforts to press for social change and inclusion, and further opening up the church to Harvard and the wider community with the sentiment, “Everyone may not belong to Mem Church, but Mem Church belongs to everyone.”

“Harvard has been an incredible place for me professionally and for my family, personally. We developed incredible relationships that I am certain will stand the test of time and distance,” said Walton, an ordained Baptist minister whose research focuses on the intersections of religion, politics, and media culture. “The Memorial Church embraced me and helped me to grow intellectually and spiritually. Over the past seven years, I feel that we have extended that embrace to a wide array of people from varying walks of life. Those who gather today at Mem Church are both younger and more colorful, literally and figuratively, than when I arrived.”

Looking ahead, Walton said he is eager to head an institution that is devoted to preparing people for lives in ministry.

“At Wake Forest School of Divinity, there are about 125 master of divinity school students that are entering pulpits across this country and engaged in human services. To think that I could be a part of helping to shape the curriculum, and thus build upon the great work that they have been doing in preparing women and men for the ministry, is an exciting proposition.”

Across the University, members of the Harvard community reflected on Walton’s time in Cambridge.

“Jonathan Walton is an extraordinary talent, one of the finest preachers I have ever heard,” said Harvard President Larry Bacow. “His deep commitment to our students and our community have strengthened spiritual life at the University. With great compassion and wisdom, he has constantly reminded us of our responsibility to use our gifts to make the world a better place, and I am confident that he will make Wake Forest a better place, just as he has Harvard.”

An author, ethicist, and religious scholar, Walton graduated from Morehouse College and attended Princeton Theological Seminary. Prior to arriving at Harvard, he was assistant professor of religious studies at the University of California, Riverside, from 2006‒2010. He joined Harvard Divinity School (HDS) in 2010 and became the Pusey Minister in July 2012.

“Jonathan exemplifies the best in the great history of professorial ministers at the Memorial Church: He is both a scholar of world renown as well as a preacher whose voice resonates with both the timbres of a long and sublime African American tradition and the exquisitely subtle capacity for explications of the Harvard ministers who have preceded him. In other words, he excels both as a person of thought and a person of faith,” said Henry Louis “Skip” Gates Jr., Alphonse Fletcher Jr. University Professor and director of the Hutchins Center.

During his tenure, Walton made a number of changes aimed at further opening the church to Harvard students, faculty, staff, and the public. He introduced a weekly coffee meeting for the community following Wednesday morning prayers, expanded the scope of speakers at weekday prayer services, and strengthened ties with HDS by affiliating the ministers there with the Memorial Church.

Walton was also committed to embracing Harvard’s diverse community, which comprises people of multiple faiths. In 2017 he requested the recruitment of the University’s first Muslim chaplain. The same year he announced that Lucy Forster-Smith, Sedgwick Chaplain to the University and senior minister in the Memorial Church, would dedicate her efforts full-time to multifaith initiatives.

Anyone who has corresponded with Walton by email or text would have seen his familiar sign-off, “One Luv.” The line is a nod to Baptist minister and Civil Rights leader Benjamin Elijah Mays, who said, “The love of God and the love of humanity are indeed one love.”

“That’s the lens he tried to bring to the community, to Harvard itself, to the Bible, to his vocation,” said Stephanie Paulsell, Susan Shallcross Swartz Professor of the Practice of Christian Studies at HDS. Another hallmark of Walton’s ministry, said Paulsell, was his drive to make the church “a place where the intellectual, the spiritual, and the ethical were all nurtured.”

“He wanted the church to be a place where you could really be challenged intellectually or you could participate in spiritual practice, deepen your spiritual life, and where there were opportunities to serve our neighbors both close at hand and far away,” said Paulsell.

In 2016 and 2017 Walton also oversaw a major, multimillion-dollar renovation to the church, one of the most extensive to the building in its 87-year history, and the result, he said when it reopened, of “collective moral imagination.” The updates included an overhaul of the ground floor that saw the addition of meeting rooms, offices, a music rehearsal suite, and a “Student Oasis,” an open area with a meeting room, kitchen, and comfortable chairs where Harvard students could study, socialize, or take a break from their busy schedules. The work also made the building more accessible and included installing air conditioning in the church, which could become notoriously sweltering during the summer months.

As a passionate advocate for civil rights, Walton used his Harvard time to continue to press for social change. He led Harvard students on service trips in the U.S. and South Africa; frequently used his sermons to speak out against police violence, racial profiling, and mass incarceration; and supported the efforts of the Black Lives Matter movement and the Deferred Action for Childhood Arrivals (DACA) immigration policy that protects young undocumented immigrants from deportation. In 2017 Walton, along with other University professors, was arrested for blocking traffic along Massachusetts Avenue while protesting the Trump administration’s decision to end the DACA program.

An avid sports fan, he was a regular at Crimson athletic events and hosted popular tailgate parties at his Sparks House home. Harvard men’s basketball coach Tommy Amaker said Walton and his family were “advisers, mentors, counselors, supporters, and friends” to the Harvard basketball program, and called their impact on the Harvard community “immeasurable.”

“Rev and Cecily (and their amazing kids!) have been more than friends — they have become family to my wife and me,” wrote Amaker in an email. “As the saying goes, ‘There is nothing better than when your family become your friends and when your friends become your family.’ Walton Nation have become family to so many here at Harvard and the broader community!”

Walton said helping as many people as possible feel like part of the Harvard community was his driving mission as Pusey Minister.

“I felt that if the Memorial Church could not lead the way in terms of making people feel welcome and affirmed at Harvard University, then we should just close our doors. So, I hope that others will recall my time here and say ‘I felt seen.’”

The University will begin a search for Walton’s replacement in the coming months.