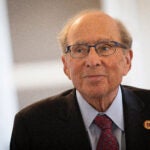 Donoff to step down as dean of School of Dental Medicine

Twelve Harvard faculty are among the more than 200 individuals elected to the American Academy of Arts and Sciences, the academy announced today.

“One of the reasons to honor extraordinary achievement is because the pursuit of excellence is so often accompanied by disappointment and self-doubt,” said David W. Oxtoby 72, the president of the American Academy of Arts and Sciences. “We are pleased to recognize the excellence of our new members, celebrate their compelling accomplishments, and invite them to join the academy and contribute to its work.”

The academy was founded in 1780 by John Adams, James Bowdoin, and others who believed the new republic should honor exceptionally accomplished individuals and engage them in advancing the public good. The academy’s dual mission remains essentially the same 239 years later, with honorees from increasingly diverse fields and with the work now focused on the arts, democracy, education, global affairs, and science.

“With the election of these members, the academy upholds the ideals of research and scholarship, creativity and imagination, intellectual exchange and civil discourse, and the relentless pursuit of knowledge in all its forms,” said Oxtoby.

“While the work of this class includes work never imagined in 1780 — such as cultural studies, cybersecurity, disease ecology, nanotechnology, paleoclimatology, and superconductivity — these members embody the founders’ vision of cultivating knowledge that advances, in their words, a ‘free, virtuous, and independent people,’” said Nancy C. Andrews, board chair of the American Academy.