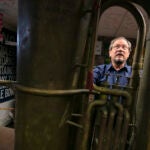 Kerry Thompson, Ed.M. ’08, didn’t start a dance program to promote human rights. But after seeing how dance brought people together around a common interest — whether they had disabilities or not — her program gracefully pivoted in that direction.

Thompson, a Louisiana native, expanded her nonprofit, Silent Rhythms, from including people with disabilities in dance to using dance to promote inclusion in society. It’s a paradigm shift, she feels, that will help change how people perceive those with disabilities, who often face discrimination and barriers restricting them from fully participating in society.

“Inclusion is still not a given in the U.S.” said Thompson, “and that’s why rather than accept that to be a fact, our society has to address it, challenge it.”

So Thompson, who earned her master’s degree at the Harvard Graduate School of Education and is deaf and blind, set out to do her part to move society forward.

“I love that [in dance] you can communicate with your partner without having to say a word,” Thompson said. “To me, that’s why dancing is the perfect way to bring the [deaf-blind, deaf, hearing-impaired, and hearing communities] together.”

Step by step, tango by tango, Thompson has taught dance to more than 5,000 individuals with disabilities, alongside those without them. Her effort has helped educate, raise awareness, and promote inclusion among people without disabilities while inspiring and bringing confidence to marginalized communities such as the deaf, who are often overlooked in dance because they can’t hear the music.

“As a teacher, I love when my students start with all these fears and self-doubts, but the more they do it, the more fun they have,” she said. “They are freed of their inhibitions and think, ‘I can do this.’ One student who has been with me for four years told me that he can now walk better. Before he struggled with walking due to balance challenges.”

Thompson understands many of the difficulties her students with disabilities face. Born with Usher syndrome, a rare genetic disorder that causes deafness and gradual vision loss, Thompson was born deaf and at age 10 began contending with progressive blindness. While most people can see 180 degrees, she can now see only 10. “It’s like seeing the world through a tiny hole on a piece of paper over your face,” she said.

According to the U.S. National Library of Medicine, approximately 100,000 people in the U.S. — not even 1 percent of the population — live with Usher syndrome, which accounts for most deaf-blindness. “Most people will never meet a person who is deaf-blind and most can only think of one person in history with deaf-blindness: Helen Keller,” Thompson said.

Despite hardships and even outright discrimination because of her disabilities, Thompson has overcome many of the barriers she has encountered. She can sign and read lips, and at a young age she learned to speak verbally with the help of a speech pathologist. As her eyesight has declined she has learned to read braille and use a white cane and tactile sign language (signing into the hands). She graduated from Louisiana State University, and at Harvard earned her master’s in human development and psychology. She moved to Boston for better career opportunities after being rejected in Louisiana because she was deaf.

“The response was, ‘We need someone who can hear,’” she said.

This type of discrimination has fueled Thompson’s advocacy work outside of Silent Rhythms. At the Disability Rights Fund (DRF), a grant-making collaborative that supports people with disabilities around the world, she serves as the inclusion and analytics officer. She is also on the Massachusetts Statewide Advisory Council and the board of directors for DEAF, Inc., and serves as a liaison representative for the DeafBlind Community Access Network Advisory Council.

At Silent Rhythms, Thompson does just that by connecting people who otherwise might not be able to communicate with one another. At one workshop, she teaches basic salsa and phrases in American Sign Language. It’s followed by a dance social where people communicate with the phrases and steps they just learned. The workshop gives disabled and nondisabled dancers a reason and opportunity to connect and understand one another.

Other workshops Thompson teaches at Silent Rhythms are specifically for the deaf-blind and for anyone who knows sign language. In the summer, she also teaches Salsa in the Park, which attracts around 500 people every Monday evening.

Thompson started dancing 15 years ago when a friend invited her out. “I jumped at the chance to go,” she said. “No one had ever asked me before. Most people without disabilities overthink when it comes to inviting someone with a disability to come along — then just simply don’t ask.”

Thompson quickly fell in love with salsa. She followed it up with bachata, cha-cha, merengue, swing, and a little tango. It was difficult, but once she understood the count and steps, she was able to put it together and get in rhythm, she said.

“My blindness usually restricts my movement out in the real world,” she said. “I have to go slow and take careful steps. Dancing makes me feel like the real me can come through.”

And while she can cannot hear the music, Thompson can certainly feel it.

“I find that people who can hear and can see focus so much on those senses that they do not realize the other senses they have,” she said. “I’m extremely sensitive to touch and the world around me. As much as a person who can hear listens to the music with their ears, I listen to it with my feet. I can feel the vibration pulsating from the floor.”

Recently, however, Thompson almost stepped back from dance and from society in general. Her vision continued to deteriorate and things she had once found easy were becoming increasingly difficult.

“A lot of people with deaf-blindness feel this way — that we have to hide from society,” she said. “Or rather that society is too difficult to navigate, so why try?”

Thompson persisted, though, realizing that if she and others like her do fall back, the inclusive society she hopes for will never become a reality. She’s willing to keep doing her part no matter the difficulty, one salsa and one tango at a time.

Silent Rhythms will host a Salsa and American Sign Language workshop and dance social from 1 p.m. to 4 p.m. on March 9 at the Muevelo Dance Studio in Malden. The lesson will be taught in ASL and spoken English. For more information or to RSVP visit the Facebook event.