Unwinding and connecting at WinterFest 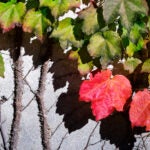 Harvard community celebrates the season with games, firepits, and marshmallows

The coldest weather can foster the warmest moments.

Students have plenty of opportunity to bundle up, avoid people, and stay indoors during the year’s frostier months. But Harvard’s Common Spaces is asking them to shed those covers during the third annual WinterFest, a time and place where people can chill out and warm up — to the weather and one another.

Walk by the Science Center Plaza during the day and you’ll see students, faculty, staff, and other members of the Harvard community taking part in classic ice-lane games like curling, or lounging beside smoky fire pits, roasting marshmallows and sipping hot chocolate while top 40 songs play in the background.

Open daily from noon to 7 p.m., this year’s WinterFest gives visitors a reason to take their time on what can seem like a three-monthlong shuffle from warm place to warm place. On Thursdays, Fridays, and Saturdays, things become toastier as firepits are lit in the plaza and the hours are extended until 8 p.m.

“It changes the perspective,” said Asa Coleman ’22, sitting by the fire with fellow first-years Izzy Kakala and Remi Owoseni.

Kakala, with a book cracked open on his lap, said the space provides a laid-back area to get ahead on some class work. Coleman and Owoseni said the firepit is perfect for a mental break.

The plaza is also a place for making impromptu connections, especially with strangers you’d otherwise just pass by. Take the chance meeting between Judy Benardete, a Harvard Business School alumna who lives in the area, and Alan Ellison, there to meet a Harvard student for dinner. The pair, attracted by the beckoning fire, sat and struck up a conversation.

“How often do we get to do that?” Benardete said. “The fire is so inviting. Stories come out.”

And if conversation and connection aren’t enough, there are marshmallows and other tasty treats or whole meals from the Common Spaces’ food trucks and Harvard Student Agencies’ s’mores kits and hot chocolate.

For those looking for a little more action, such as Lucy Gillet from the Harvard T.H. Chan School of Public Health, WinterFest has more active entertainment, including bowling, foosball, cornhole, and table tennis, which Gillet played with a friend. First-year students Kian Attari and Max Phillips found themselves on the ice lanes playing shuffleboard.

“We just got out of math, so this is a good break,” Attari said. His friend then slid the puck over, winning the game. “It’s over,” Phillips joked.

Their game was done, but WinterFest runs until March 15 — plenty of time for a rematch.

WinterFest is collaboratively managed by Common Spaces and Harvard Student Agencies. For more information about the WinterFest schedule, special events, and the food truck schedule, visit www.commonspaces.harvard.edu and Facebook.