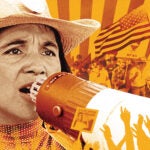 Timothy Barakett and Mariano-Florentino Cuéllar will take office in July

Timothy R. Barakett ’87, M.B.A. ’93, and Mariano-Florentino (Tino) Cuéllar ’93 have been elected as members of the Harvard Corporation. Both will assume their roles on July 1.

Barakett, a native of Canada, is a highly regarded expert in finance, an active investor and philanthropist, and an experienced trustee in education, health care, and beyond. He is also a dedicated alumni leader who played a prominent role in The Harvard Campaign, especially in efforts to augment student financial aid.

Cuéllar, a native of Mexico, is a justice of the Supreme Court of California and a longtime leading member of the Stanford faculty. A lawyer and a political scientist, he has directed Stanford’s principal institute for international studies, has served in varied roles in federal government, and currently sits on the Harvard Board of Overseers.

“We’re very much looking forward to having Tim Barakett and Tino Cuéllar join the Corporation next July,” said William F. Lee, the Corporation’s senior fellow and chair of its governance committee. “Both are dedicated Harvard alumni who have gone on to distinguished careers. Both are experienced board members who share a commitment to creating opportunity for others. Tino offers a remarkable breadth of experience and accomplishment in higher education and public service. Tim will bring us notable financial and business savvy, as well as deep engagement with alumni affairs and philanthropy. Their expertise and perspectives, as well as their collegiality, promise to contribute greatly to the Corporation’s work.”

Known for his business and finance acumen, his involvement with diverse nonprofit organizations, and his leadership in alumni affairs and development, Barakett founded and led Atticus Capital, a diversified asset-management firm, where he served as chairman and CEO for 15 years. Under his leadership, the firm grew to more than $20 billion in assets at its peak.

Barakett wound down Atticus Capital in 2010 to spend more time with his family and pursue his philanthropic interests. An active investor, he has served since 2010 as chairman of TRB Advisors, which manages his family’s capital; as co-founder and non-executive chairman of Stabilis Capital Management, a private investment firm; and as lead investor and director of GreyCastle Holdings, a reinsurance business. He also serves on the executive committee of Castleton Commodities International, a trading and infrastructure company with activities worldwide.

Barakett has emerged in recent years as a rising alumni leader at Harvard. He was a member of the University-wide executive committee for the recently concluded Harvard Campaign, and he co-chaired both the Faculty of Arts and Sciences steering committee for the campaign and the committee on financial aid. A member of the Committee on University Resources, he has helped raise reunion gifts for the College Class of 1987 and the Harvard Business School Class of 1993.

“I am deeply honored to have the opportunity to serve on the Harvard Corporation,” said Barakett. “I know firsthand the impact that Harvard can have on individuals, communities, and organizations throughout the world, and I look forward to working with President [Larry] Bacow, the members of the Corporation, and Harvard’s leadership to further its important mission.”

The Barakett family’s largest gift to Harvard, supporting financial aid, was critical in the launch of start-up grants for first-year undergraduates from low-income families. As Barakett told the Harvard Gazette in 2016, these supplementary grants are meant to “give new students more financial freedom to choose their activities, whatever they may be — doing public service, getting involved in student organizations, or even just the freedom to have dinner in a restaurant with classmates — because these experiences are such an important part of their student life and education. We want to help empower them to create their best Harvard experience, and never to feel they are on the periphery.”

Barakett is a trustee and executive committee member for the Dalton School, a past trustee of the New York Public Library, and a past board member for the Mount Sinai Hospital, Continuum Health Partners, and St. Luke’s–Roosevelt Hospital Center. He has served on public company boards in England and France.

The Baraketts’ philanthropy has emphasized efforts to promote equity and inclusion in education, health care, and other spheres. They have provided support to such organizations as the New York Public Library, especially its after-school programs at local branch libraries; Education Superhighway, which promotes high-speed internet access for classrooms nationwide; Freedom to Marry, dedicated to marriage equality; the Robin Hood Foundation, a leading anti-poverty organization; and the Lucile Packard Foundation for Children’s Health.

A native of Montreal and a first-generation college student, Barakett concentrated in economics at Harvard College. A star College hockey player drafted by the NHL’s New Jersey Devils, he was a member of Team Canada in 1987, and he played professional hockey in Switzerland in 1987‒88.

Shifting his attention to finance, he served as a senior associate at Battery Ventures from 1988 to 1991. After receiving his M.B.A. from Harvard Business School, he was a managing director at Junction Advisors before founding Atticus Capital in 1995.

A justice of the Supreme Court of California since 2015 and a Harvard Overseer since 2017, Tino Cuéllar is a respected judge and longtime law professor known for his intellectual range, his international perspective, and his devotion to public service.

Born in Matamoros, Mexico, the son of educators from Northern Mexico, he moved with his family to Calexico, Calif., just across the border from its sister city, Mexicali, at age 14. After graduating from Harvard College, where he concentrated in government and political psychology, he received an M.A. in political science from Stanford in 1996 and a J.D. from Yale Law School in 1997, before serving as senior adviser to the undersecretary for enforcement in the U.S. Treasury Department. He was awarded a Ph.D. in political science from Stanford in 2000, and served in 2000‒01 as a law clerk for Chief Judge Mary Schroeder of the U.S. Court of Appeals for the Ninth Circuit.

In 2001, Cuéllar joined the Stanford law faculty, where he became a full professor in 2007 and the Stanley Morrison Professor of Law in 2012. His scholarship and teaching explore legal and institutional change across a wide range of fields, including administrative law and legislation, cyberlaw, criminal justice, public health law, immigration, and international law and security. As director of Stanford’s Freeman Spogli Institute for International Studies from 2013 to 2015, he oversaw an array of 12 centers and programs focused on such diverse areas as governance and development, international security, health policy, food security and the environment, and contemporary Asia.

“When I arrived at Harvard from a small California border town, I found opportunities I could scarcely have imagined,” said Cuéllar. “The privilege of serving on the Corporation represents a chance to do all I can to help others have the same life-changing opportunities. At a time when the world faces daunting challenges, from protecting our planet to healing the sick to bridging divides with decency and candor, I look forward to working with President Bacow and the governing boards to ensure that Harvard continues to live up to its promise as a force for creativity, integrity, and humanity.”

While on leave from Stanford, Cuéllar co-chaired the Immigration Policy Working Group for the Obama-Biden transition in 2008‒09. He then served in the White House as special assistant to the president for justice and regulatory policy in 2009-10, advising on such issues as criminal sentencing, public health and safety, regulatory reform, civil rights, and immigration. After resuming active faculty service, he co-chaired the U.S. Department of Education’s Equity and Excellence Commission and served on the Council of the Administrative Conference of the United States.

Announcing Cuéllar’s nomination to the Supreme Court of California in 2014, Gov. Jerry Brown said: “Tino Cuéllar is a renowned scholar who has served two presidents and made significant contributions to both political science and the law. His vast knowledge and even temperament will — without question — add further luster to our highest court.” Cuéllar began serving as a justice in 2015, joining one of the most influential state supreme courts in the nation. Shortly after, he was named to chair the task force that oversees implementation of the California judiciary’s language-access plan, serving millions of Californians with limited proficiency in English.

He remains the Herman Phleger Visiting Professor of Law at Stanford. As a Harvard Overseer, he serves on the standing committees on social sciences and institutional policy, the advisory committee on honorary degrees, and the visiting committees for both the Design School and the Medical School. He taught January-term courses at Harvard Law School in 2016 and 2017.

Cuéllar chairs the board of the Center for Advanced Study in the Behavioral Sciences; the advisory board of AI Now (an initiative at New York University exploring the impacts of artificial intelligence); and the advisory board of Stanford Seed (focused on alleviating global poverty). He is a trustee of the Hewlett Foundation and a member of the American Law Institute’s governing council. He was Stanford University’s principal commencement speaker in June 2017.

In accordance with Harvard’s charter, Barakett and Cuéllar were elected yesterday by the President and Fellows, with the consent of the Board of Overseers.

Their election follows the arrival on the Corporation last July of Carolyn A. Martin, president of Amherst College, and Penny S. Pritzker ’81, former U.S. Secretary of Commerce. Barakett and Cuéllar will fill vacancies created by the planned departures of Susan L. Graham ’64, the Pehong Chen Distinguished Professor of Electrical Engineering and Computer Science at the University of California, Berkeley, and Jessica Tuchman Mathews ’67, former president of the Carnegie Endowment for International Peace.

Known formally as the President and Fellows of Harvard College, the Harvard Corporation is the oldest corporation in the Western Hemisphere. Chartered in 1650, the Corporation exercises fiduciary responsibility with regard to the University’s academic, financial, and physical resources and overall well-being. With 13 members, the Corporation is one of Harvard’s two governing boards. Members of the other, the Board of Overseers, are elected by holders of Harvard degrees.