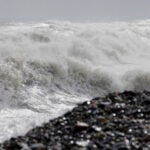 For more than a century, the world’s oceans have been becoming steadily more acidic as they soak up ever-increasing amounts of carbon dioxide from the atmosphere, and the impacts can be fatal for invertebrates such as shellfish, plankton, and corals that rely on dissolved minerals to build their shells and exoskeletons.

For at least some fish, though, the story may be more complicated.

Using precise CT scans of skate skeletons, Valentina Di Santo, a postdoctoral fellow in the lab of Evolutionary Biology Professor George Lauder, was able to show that, while ocean acidification has had led to a drop in the mineralization of some parts of the skeletons, it has had the opposite effect in other areas. The first-of-its-kind study suggests that continued ocean warming and acidification could impact everything from how fish move to how they eat. The findings are described in a Jan. 9 paper published in the Proceedings of the Royal Society B.

“This result was very surprising,” Di Santo said. “Until now, most research had been focused on the mineralization of the exoskeletons of invertebrates, because we know they experience very dramatic impacts from acidification, but nobody had looked at what happens to vertebrates.”

One reason for the lack of such studies, she said, is simply physiological: Unlike shellfish or coral, fish have internal skeletons.

“For the most part, people thought fish would be pretty resilient,” she said. “Certainly acidification stresses them — their metabolic rates go up and studies have shown behavior changes — but they have managed to adjust. But the more we investigate, the more we see that there are strong negative effects, even in the skeleton.”

Though she ended up finding it, Di Santo wasn’t searching for evidence of how acidification was impacting fish skeletons.

“I was looking at skate embryos that live off the coast here in New England, and studying the effect of developmental acclimatization to ocean acidification on their physiology and behavior,” she said. “I was able dissect out some of the parts of the skates and place them in a CT scanner. It was very exploratory; I didn’t know what I would find.”

What she found, Di Santo said, was a reduction in the mineralized outer layer, or tiles, of the cartilage skeleton in the skates’ wings.

“Those mineralized tiles are important, because skates don’t have a swim bladder, so [the tiles] give them a very light but very strong skeleton,” she said. “What may be happening is that, with ocean warming, the skates are growing faster and the mineralization just can’t keep up.”

At the same time, Di Santo said, the study revealed an increase in mineralization in skates’ jaws and crura, the modified pelvic fins the fish use to “walk” on the ocean floor.

“What’s going on is that the skates are very good at buffering acidosis,” Di Santo said, “and the result is that they wind up with very high phosphate levels in their blood. I think they are then dumping that excess into those tissues, and the result is more mineralization.

“In some ways, this could be viewed as an advantage,” she continued. “It could mean stronger jaws and could increase the efficiency of walking with their crura. But the flip side is that it also means they are heavier, and it’s already metabolically expensive for them to swim long distances, so a heavier skeleton will reduce their capacity to migrate.”

Going forward, Di Santo said she hopes to examine whether similar effects are found in bony fish. Other studies have suggested that high CO2 levels can lead to deformities in fish — but few have tested whether they are connected to acidification.

Ultimately, Di Santo said, the study not only highlights the continuing impact of climate change, but also demonstrates that those impacts can reach into surprising areas.

“I presented this work at a conference this summer,” she said, “and people were shocked. What this work really demonstrates is that the effects of climate change are more wide-ranging than we ever thought.”

This research was supported with funding from the Steven Berkeley Marine Conservation Fellowship, the Museum of Comparative Zoology at Harvard University, and an Office of Naval Research Multidisciplinary University Research Initiative Grant.