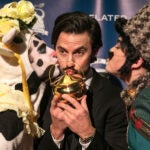 Milo Ventimiglia is feted (and roasted)

The Harvard Government Department’s Climate Change Committee, formed in March last year in the wake of sexual misconduct allegations, has released its climate survey report. Within the 100-plus-page document, the survey, released Feb. 6, asked faculty, students, and staff for feedback in examining the department’s culture and making recommendations to create a more inclusive environment.

Committee chair Steven R. Levitsky and subcommittee inclusive chair Ryan D. Enos talked to the Gazette about the findings, what steps have been taken to improve the climate, and how the University at large can benefit from the results.

GAZETTE: What are among the most important findings?

ENOS: The most important finding is that there’s wide satisfaction with the department. But, importantly, this varies widely by group, across gender most significantly. And across almost any of the findings there is variation by gender. You see often that whether people feel like they can be their true selves in the department varies by political orientation. It varies by role as well. In almost any aspect, our faculty have a broad sense of satisfaction and belonging, but graduate students less so.

LEVITSKY: Certainly, one finding that jumped out is that female grad students report having a tougher time.

ENOS: We had a sense of that, which is one of the things that launched this. But now that we have something that quantifies it, that gives us a lot more to work with, where to push forward and what to change to make that gap go away.

GAZETTE: The report showed a very high satisfaction rate (65 percent) regarding department climate, and yet a significant number (34 percent of grad students and 47 percent of female grad students) did not feel the department met an appropriate standard of inclusion and diversity. Can you talk about this?

ENOS: Female grad students are the clear outlier when it comes to how they think about the program. We gave people a list of adjectives of how they would describe the department, whether they found it “welcoming,” for example. And almost across the board, people described the department as a positive place. But again there’s this distinction where the female grad students don’t feel as positively as their male peers.

GAZETTE: So what in the report is the priority? What needs immediate attention?

ENOS: The priority is that difference between male and female graduate students, moving forward on a bunch of programs the Climate Change Committee has already taken up. One of them is hiring more female faculty. All of us tend to thrive when we have people with whom we can identify and know how to support us. There is really pretty good evidence that one of the most important social aspects of building an environment that is supportive of women is hiring more women.

LEVITSKY: For as long as I’ve been here, we’ve hovered around a 3-to-1 male-to-female ratio in the faculty. Clearly if that’s the case, you can expect that female graduate students and maybe even undergrads feel less comfortable, less like they belong. One of our priorities, although this is something we cannot do overnight, is to get a lot better than 23 percent. We need to do much better than that.

ENOS: It’s a long-term process, but pipeline is part of it because we are contributing to that pipeline. Part of it is supporting the grad students we have, and we have a subcommittee on mentoring that’s already in motion. One aspect that has come up is gender disparity across mentoring. Our job is to unlock intellectual talent so that we can learn more about the world. When women aren’t able to do their best work, we aren’t allowing that to happen.

“Our job is to unlock intellectual talent so that we can learn more about the world. When women aren’t able to do their best work, we aren’t allowing that to happen.”
— Ryan D. Enos

LEVITSKY: There are two pipeline steps we are trying to attend to. One is making sure we have gender balance in the admissions process. The quality of applicants is so high that it is not difficult to have gender balance in our admissions. The second step is exactly what Ryan is talking about: taking steps to ensure we have a less hierarchal and more open and inclusive climate here in the department. The reason it’s not an overnight process is that we get an average of one or two hires a year. It’s physically impossible to get to 50-50 as quickly as we would like.

ENOS: There is also the matter of supporting our faculty that are here. We have challenges retaining our female junior faculty and with the support we give them.

LEVITSKY: And that’s another agenda item for our broader committee. Our rate of hiring women is terrible; our rate of tenuring women is much worse than that. The numbers are awful. We have a subcommittee chaired by Torben Iverson that is exploring these issues. There have been a good number of men who’ve been tenured in the 19 years I’ve been here, but there hasn’t been a single woman.

ENOS: We haven’t denied them, but they’ve left. And it points to the support we need to give women who are here to make sure they can be successful. We have made some very positive steps. For example, a number of our recent senior faculty hires with tenure have been women (Christina L. Davis, Melani Cammett, and Danielle Allen). So we’re making progress, but we have a long way to go and the report shows us the urgency.

GAZETTE: The report also informs other paths forward that the department is already taking. Can you talk about some of them?

ENOS: One of the things about a department that is hierarchical — and therefore, when people have things happen to them that shouldn’t, the amount of discrimination and harassment that exists is not widespread, but it’s not zero and that’s unacceptable — one of the problems is that perhaps people don’t know who to turn to. They don’t feel supported, they feel isolated.

So with the inclusion committee, there have been efforts just to try to bring the department together more so people feel more socially connected to each other.

You have events that are more leveling so people come together in all of their different roles. We just for the first time had a welcome-back event in September. We had good attendance. Like a lot of departments, everyone is busy, but we made a concerted effort to do that. We’re also trying to have for the first time — at least in my time here — a speaker series where we come together and bond over a common intellectual interest.

LEVITSKY: It’s basic stuff. We also have another subcommittee whose effort is to reduce the level of hierarchy and create a more democratic department. One of the initiatives we’ve already done is placing graduate student representatives on some of departmental committees, which were previously solely faculty.

Another example is workshop culture. Workshops are among the centers for intellectual life for grad students. Those workshops tend to be very intense, in some cases with a very aggressive intellectual atmosphere. And there have been complaints by not only women, but more women than men, that this is not a healthy climate. It’s very aggressive and combative in a way that many people believe favors male students, so some students have complained that it’s not an atmosphere in which they can thrive intellectually.

So one of the subcommittees consulted with faculty and graduate students and put together memos with guidelines of suggested norms of behavior within the workshop. Nothing mandatory, no rules or punishments, but they were able to reach a consensus among students and faculty over what those guidelines were.

ENOS: We collected a lot of data, and we had very good response rates. We were able to make the anonymized data publicly available, so that people will look at it across our community and see what’s important, and we will have conversations and be able to create a space to give us feedback on the findings.

GAZETTE: How do you think the findings could benefit other departments and Schools in the larger Harvard community?

ENOS:  We’re all social scientists, so we rely on data like so many departments across Harvard. But we so infrequently stop and assess ourselves beyond anecdotes to have some systematic sense of how we are doing. Now we have that, and it covers a lot of different areas and people, and we can understand who we are serving well and who we are not.

This is just one time doing this, but one thing we have discussed, and want to commit ourselves to doing, is doing this at regular intervals moving forward. There’s no reason this should only come out of crisis. We are going to want to understand the progress we have made through all of these reforms we are undertaking. The interval is being worked out, but we think every five years this is something all departments should think about doing.

LEVITSKY: Certainly we plan to. We have problems in this community to address, but we, like all other departments in the University, should aspire to lead, to be a model across the country. If we do our job well, there should be lessons others can learn.

This interview was lightly edited.