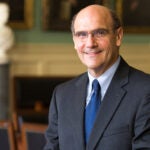 Co-founder of United Farm Workers will be honored in May for key contributions to labor, Latino, and women’s rights

Dolores Huerta, the civil rights icon who fought to build a nationwide coalition protecting farm workers, will receive the Radcliffe Medal on May 31, the last day of Harvard’s Commencement week, the Radcliffe Institute for Advanced Study announced today.

The award, a highlight of the institute’s annual Radcliffe Day, honors individuals whose lives and work have had a transformative impact on society. Huerta, who has fought for 60 years to secure the rights of disadvantaged people and communities, is an exemplary medalist, noted Dean Tomiko Brown-Nagin, who said that Huerta’s accomplishments were long unsung, particularly compared with those of her male contemporaries.

“Dolores Huerta is a towering figure in the labor, civil rights, and women’s movements,” said Brown-Nagin, a legal scholar and civil rights historian. “The fact that some individuals won’t immediately recognize Huerta’s name and know why we’re honoring her illustrates the all-too-common erasure of women from our histories.

“As a historian, I am keenly aware that Dolores Huerta and other women from traditionally marginalized groups are especially likely to be omitted from our historical narratives.”

In 1962, Huerta and Cesar Chavez co-founded what would become the United Farm Workers. Although her name is not as recognizable as her partner’s, Huerta’s contributions were no less significant, scholars say.

Years earlier, well before food activism captured the public imagination, Huerta witnessed and experienced ethnic and gender bias as a teenager in California’s Central Valley, one of the most productive farming regions in the world. The ill treatment she saw inflicted on the workers there led Huerta to play a critical role in California’s legendary grape strike, which began in September 1965. Filipino pickers walked out of the fields to protest years of poor pay and desperate working conditions; two weeks later, they were joined by Mexican workers. The strike continued for five years, until California table-grape growers signed their first labor contracts giving workers better pay, benefits, and protections.

She received the Eleanor Roosevelt Human Rights Award in 1998 and President Barack Obama awarded Huerta the Presidential Medal of Freedom in 2012, saying, “Dolores helped lead a worldwide grape boycott that forced growers to agree to some of the country’s first farmworker contracts. And ever since, she has fought to give more people a seat at the table. ‘Don’t wait to be invited,’ she says. ‘Step in there.’ ”

The Radcliffe Day 2019 program has been designed to honor Huerta’s work on the issue that sparked her activism: the intersection of food and social justice. The audience in Radcliffe Yard will hear from Huerta herself and from a panel of leading activists and scholars with perspectives on food, food production, and policy. Journalist Soledad O’Brien ’88 will moderate the discussion.

The panelists will include:

Watch the live webcast by clicking here. The event will begin at 10 a.m. Friday with a panel discussion, titled “Nourishing America: Exploring the Intersection of Food and Justice.”